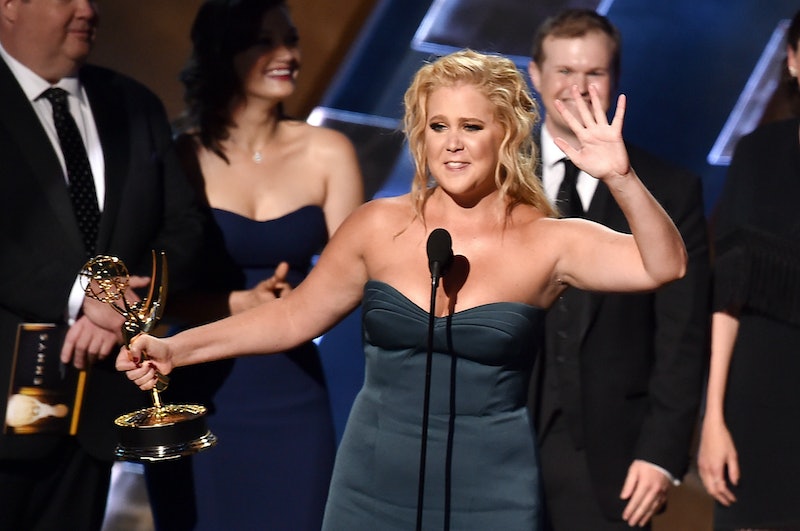 If you are counting down the days until Trainwreck is released on DVD, waiting patiently for the next season of Inside Amy Schumer to premiere, or doing anything at all to bide your time until you can get your hands on more Amy Schumer, you are in serious luck. It was announced on Monday that Schumer is set to star in a Jonathan Levine directed action-comedy about a mother-daughter duo. So who will play Amy Schumer’s mother?

The script was written by Katie Dippold, the woman who brought you The Heat, a ton of awesome Parks and Recreation episodes, and the upcoming remake of Ghostbusters. In other words: One of the hottest writers in Hollywood. The as-yet-untitled film promises to be just as good as Dippold’s previous work, especially with a script based on her own relationship with her mother. Who doesn’t love an autobiographical comedy? Since Dippold’s bread and butter are scripts about women being hilarious and kicking some serious ass, I can only imagine that this movie is going to match her amazing roster of films.

The only thing left to decide? Who will play Amy Schumer’s mother in the film.

Luckily for the production team, I’ve come up with nine amazing actresses who would be amazing in the comedic role. (They can thank me later.)

The country’s funniest lady with the most renowned? Sounds like a match made in Hollywood heaven.

These two blonde comedy geniuses would make such a good match for this action-comedy film.

Sarandon has definitely let her hair down in some hilarious comedies lately. Like the Melissa McCarthy film Tammy. Plus, no one plays a mother as well as she does. Do I have to remind you of her tear-jerking turn in Stepmom?

Another serious actress turned comedy expert, Weaver showed off her funny bone in Baby Mama. Something tells me that, with her experience, she could knock this film out of the park.

Curtis has already rocked a number of action movies in her time, including my favorite, True Lies. She’s also experiencing a surge in popularity these days with the Fox hit Scream Queens. A feature film with America’s favorite funny girl would definitely keep her momentum going.

It’s been a while since I’ve seen Preston in a starring role, but don’t discount the actress’ ability to make a huge impact in this comedy.

An obvious choice, Louis-Dreyfus has already worked with Schumer on Inside Amy Schumer. Plus, the two comic geniuses together would be sure to make this film an absolute hit.

Maintaining her Hollywood notoriety in such roles as Marnie’s mother on Girls, Wilson is a woman who always seems to have her finger on the pulse of what’s cool to me. Starring in a film with Amy Schumer might just put her over the top.

Am I the only one who is gunning hard for a DeGeneres film comeback?

I’m waiting with bated breath to see what the production team ultimately decides, but I can tell you that I would be happy if they picked any of these awesome actresses.

More like this
Amy Schumer Is Actually The Other Kardashian Sister You Never Knew About
By Jake Viswanath
Sandra Bullock, Girlboss Extraordinaire
By Matt Harkins & Viviana Olen
Mitra Jouhari Loves A Gross Joke & This 'Real Housewives' City
By Ivana Rihter
Watch The Dramatic First Trailer For Netflix's Jennifer Lopez Documentary
By Alyssa Lapid
Get Even More From Bustle — Sign Up For The Newsletter