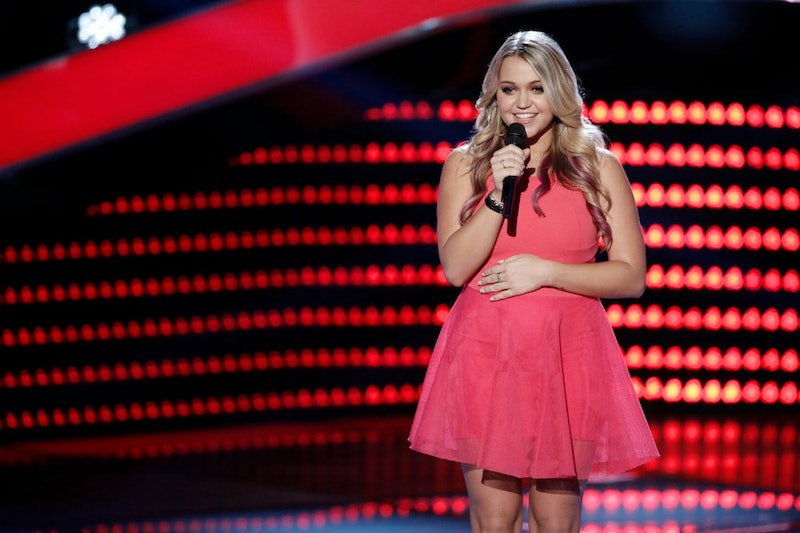 Talk about a last minute decision. Gwen Stefani waited until the VERY last minute (seriously, she was walking off the stage) to steal the loser of Team Pharrell's latest The Voice Battle Round — Riley Biederer. Biederer battled fellow teammate Evan McKeel to Stevie Wonder's "Higher Ground." Though she left it all on the stage, Evan simply delivered a better performance and took the win. Thankfully, Biederer put on a great performance and earned some high remarks from the coaches. She made an especially strong impression on Stefani and earned the last steal on the only female coach's team. This is the best move for Biederer at this point in the game — and it's quite possibly where she should've been the entire time.

There's no doubt that Biederer has the chops to be on this show. While she was good for Team Pharrell, she's a much better fit for Team Gwen. For one, Stefani is the only powerhouse female coach on this show. Biederer needs a powerhouse female voice to work with her to be successful — so being coached by Stefani is an automatic win for her. Stefani will be able to refine Biederer's already strong vocals and help her become more versatile. Stefani's instruction is exactly what Biederer needs to bring her to the next level.

So her vocals are accounted for, but what about her performance skills? As a former gymnast, Biederer already knows how to command the stage. Her confidence is palpable, but a few lessons from a superstar never hurt. With just a few improvements, Biederer will become an unbeatable force on stage. This, paired with her equally powerful vocals, will position Biederer as a huge threat in this game.

The one question that remains is, will she have what it takes to win? It's hard to tell — especially since there's tough competition to beat. But if she's able to take Stefani's direction, Biederer will definitely gain the skills she needs to become a success in the music industry — whether it's on The Voice or on her own.