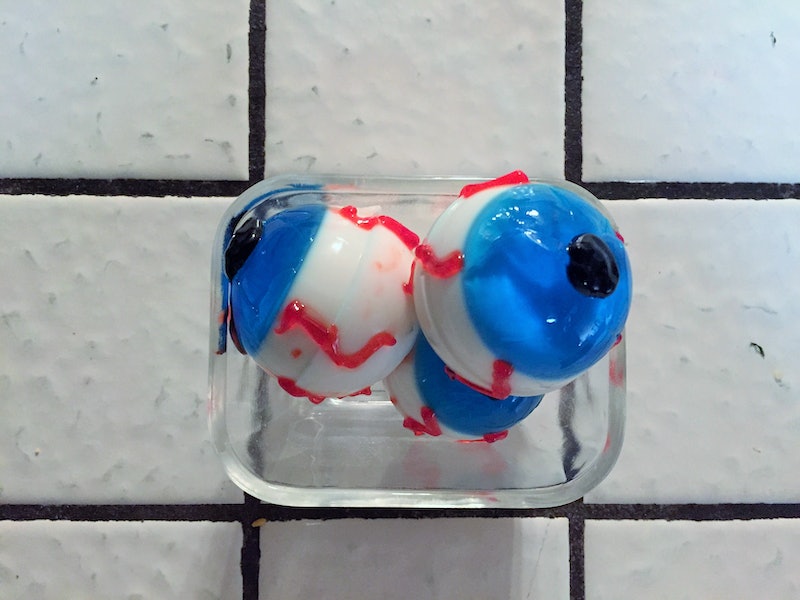 Halloween used to be a time for candy and trick-or-treating, but now that you're an adult, things have changed. The costumes and the sweets remain, but your yearly party isn't about bobbing for apples as much as it is drinking out of pumpkin kegs and slurping down Halloween Jell-O shots. Isn't being a grownup awesome?

Now that you're older, Halloween parties are crazier, creepier, and a whole lot boozier. They're a blast to attend, but if you're hosting your own adult Halloween party, then you know that the planning can be kind of stressful. Your Pinterest board is full of elaborate DIY decorations, complicated desserts, and themed mixed drink recipes, but how will you possibly get it all done? Take a deep breath and relax, because even if you're throwing a last-minute shindig, you can pull it off. The first place to start? Jell-O shots, because there is always time to make Jell-O shots. Easy to make, popular with the crowd, and super creative, holiday Jell-O shots are almost as much of a staple as jack-o'-lanterns, candy corn, and Harry Potter marathons.

Whether you are having a small get together with a few friends, or hosting the year's biggest bash, here are three Halloween-themed Jell-O shots you (yes, YOU!) can make at home.

1. In an airtight container, soak gummy worms in one cup of vodka for at least six hours.

2. Pour a half cup of vodka into a mixing bowl. Set aside. Over medium heat, bring one cup of water to a boil. Add in green Jell-O mix, and stir until completely disintegrated.

3. Transfer hot Jell-O mix to the vodka bowl, and stir. Add in 1/2 cup of cold water, and stir until completely incorporated. Pour Jell-O mixture into cups, filling about half of the way up. Add one or two worms to the cup, and let them chill in the fridge until firm.

4. Sprinkle the top of each cup with crushed Oreos, and serve.

Sweet and sour come together in this large portioned Jell-O shot. The vodka-soaked gummy worms are yummy, and look really cool suspended in green Jell-O, while the chocolate cookie crumbles complement the tartness of the Jell-O perfectly. Pro tip: eat with a spoon.

1. In a mixing bowl, add 1/2 cup of Malibu. Set aside. Over medium heat, bring one cup of water to a boil. Add in blue Jell-O mix, and stir until completely disintegrated.

2. Transfer hot Jell-O mix to the Malibu bowl, and stir. Add in 1/2 cup of cold water, and stir until completely incorporated. In a spherical ice cube mold, pour blue Jell-O mix until about 1/4 of the way full. Refrigerate until firm.

3. Once blue Jell-O is firm, prepare the white Jell-O. Start by adding one cup of Malibu to a mixing bowl. Set aside. Over medium heat, bring 3/4 cup of coconut milk, and 1/4 cup of coconut cream to a boil. Add in both unflavored gelatin packets, remove from heat, and stir until completely disintegrated.

4. Transfer the hot gelatin mix to the Malibu bowl, and stir until completely incorporated. Fill up the rest of the ice cube tray with the white Jell-O mix. Let cool, and firm.

5. Once firm, gently remove the entire Jell-O shot. Using the red decorative icing, draw bloodshot lines on the sides of the eyeballs. Use the black decorative icing to create a pupil. Refrigerate until the icing hardens slightly, and serve.

The most time consuming to make, these eyeball Jell-O Shots look really cool and super creepy. They're fruity and tropical, and they look great when laid out on a serving tray. They are guaranteed to be a huge hit at any Halloween party.

1. Add 1/2 cup of vodka to a mixing bowl. Set aside. Over medium heat, bring one cup of water to a boil. Add in red Jell-O mix, and stir until completely disintegrated.

2. Transfer hot Jell-O mix to the vodka bowl, and stir. Add in 1/2 cup of cold juice, and stir until completely incorporated. Fill the ice tray with the Jell-O mixture. Let chill in the fridge until firm.

This recipe is super simple and not too fancy, but it's tangy, delicious, and will give you a nice little buzz. Though an nontraditional Halloween flavor — as in, not pumpkin or caramel apple — it's a refreshing and zingy bite of alcohol your guests will love.