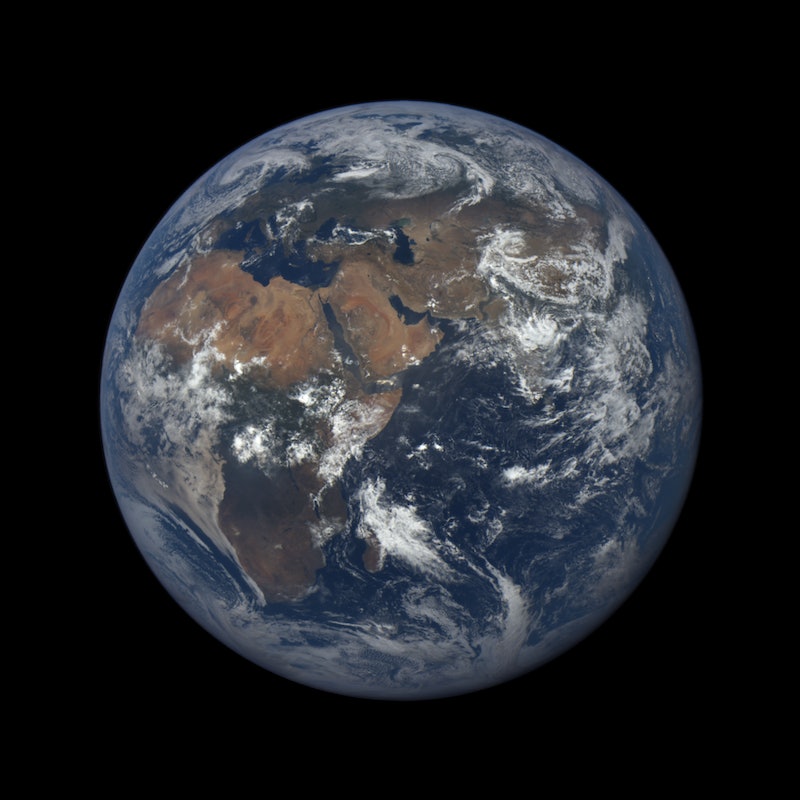 Earth — yes, our planet — has jumped on the selfie bandwagon. Maybe not at the gym, and definitely not posing with its closest million stars, but this "blue marble" we all call home has joined the Instagram-saturated culture everyone knows and loves. On Monday, NASA announced it would publish daily photos of Earth on a new website for its "EPIC" camera. About a dozen new photos per day will be featured, and the images will show Earth's side fully lit by the sun — so, duh, #nofilter.

The photos will be taken over the prior 12 to 36 hours from a camera mounted on a satellite in orbit one million miles from Earth. NASA will upload photos of the Earth as it rotates, so there will be shots taken from different vantage points of the globe every day. You also can see which areas of the planet are covered on a given day, and the site will allow you to search the archive (going back to July of this year) by date and continent. Since Earth is extremely bright compared to the rest of the universe, faint stars will not be visible. The moon, however, will sometimes make an appearance.

The Earth Polychromatic Imaging Camera (EPIC) is on the Deep Space Climate Observatory (DSCOVR) satellite, demonstrating that NASA truly loves fun acronyms. The project is a partnership between NASA, the National Oceanic and Atmospheric Administration (NOAA), and the U.S. Air Force. The satellite's main purpose is not to take pictures, but to monitor space weather.

Evidently, that's a thing, and it can have a big impact on many modern communications devices, like GPS, satellite television, and the radios connecting pilots to air traffic control. During geomagnetic storms, dangerous radiation can damage spacecraft and even cause problems with electrical grids on Earth, and the instruments aboard the DSCOVR can help monitor the situation and provide an early warning.

This satellite has a long history. It was first dreamed up and advocated for by a group that included former Vice President Al Gore. Back in 1998, Gore was fascinated by the shots of Earth from the Apollo missions, and thought we needed a camera trained on our home planet to give us a different perspective. The satellite, then named Triana, was built but never launched because Bush won the 2000 election. Republicans mothballed the project, which was teasingly called "GoreSat." When NASA and NOAA were looking for a space weather satellite, they decided to revive and repurpose it. The camera, which was already installed, remained.

The EPIC camera does have a bigger purpose than these beautiful pics envisioned by Gore. It helps scientists on Earth monitor things like vegetation, ozone, aerosols, and cloud height and reflectivity. Plus you can see storms. Photos from Saturday show the typhoons in the Pacific, like Typhoon Kappu, which has been battering the Philippines.

Like so many things regarding space as of late, these images and the DSCOVR satellite have a connection with Tesla and SpaceX CEO Elon Musk. The satellite was launched into space on a SpaceX Falcon rocket in February. The satellite may soon be joined by some of the CEO's other space dreams.

These images of Earth — which are indeed EPIC — may make us appreciate the beauty of our planet even more. Thanks, NASA!