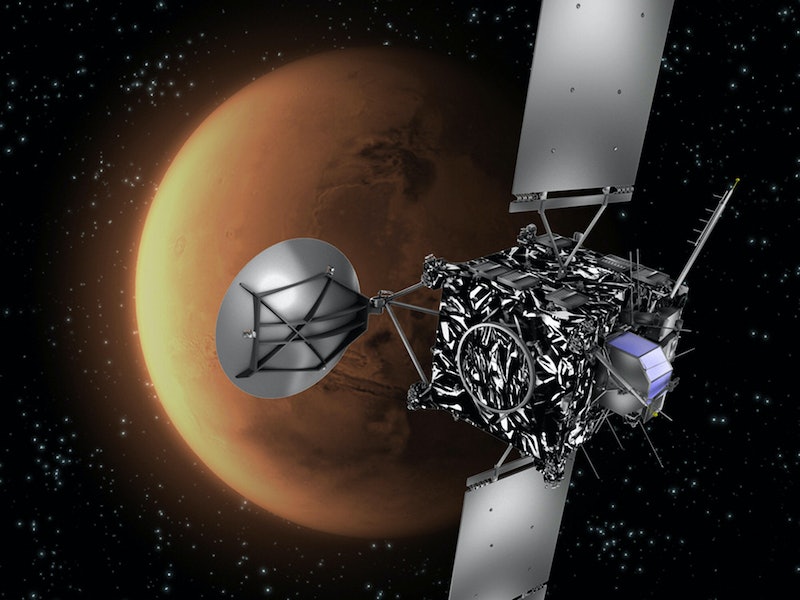 While other tech gurus debate whether or not the Internet is a basic human right, the real life version of Tony Stark is moving forward with plans to put the Internet in space. According to reports, Elon Musk wants to use a fleet of satellites to improve Internet access to those in under-served areas of the world, and then use the profits of the venture to fund his vision of putting human beings on Mars by the mid 2020's. So what's your 10-year plan?

The Tesla Motors and SpaceX CEO recently announced new plans to bring the Internet to the more than 4 billion people in the world who remain without the capacity to access the World Wide Web. Despite the fact that there were 3 billion Internet users by the end of 2014, 60 percent of the global population is still in the dark when it comes to web access, and this is a problem that Musk has decided to tackle, but of course, in space. His plan is to launch a whopping 7,000 satellites that will encircle the planet at 750 miles above the ground, providing faster, more reliable Internet to users around the world. And then, he will build a Martian colony. No, seriously.

Though Musk and his company did not elucidate how exactly this new space Internet program would generate revenue, the CEO told Bloomberg, "Our focus is on creating a global communications system that would be larger than anything that has been talked about to date." Whereas traditional Internet-providing satellites orbit the planet at altitudes of 22,000 miles away from the Earth, these new, Ironman-esque satellites would stay much closer to home, meaning that the electromagnetic signals would have a much shorter distance to travel, making for speedier connections. In fact, if all goes as planned, this new fleet of satellites could rival fiber optic cables that currently provide much of the Internet we use, and better yet, wouldn't have to worry about shark attacks like Google's cables (though perhaps in space, there are other concerns to consider, like the possibility of asteroids).

Besides making the Internet faster for those who already have it, this satellite system would also bring access to those in remote, rural regions of the world, where getting online remains nearly impossible. With Musk's satellite proposition, if someone in a small village in Africa wants to access the Internet, there will no longer be a complicated system of routers and networks through which the signal would be transmitted — instead, everything would happen more efficiently in space, with data packets bouncing across satellites until reaching the one closest to its desired location. Said Musk, "The speed of light is 40 percent faster in the vacuum of space than it is for fiber. The long-term potential is to be the primary means of long-distance Internet traffic and to serve people in sparsely populated areas."

Of course, Musk is far from the first in the tech industry to attempt bringing the Internet to all — Zuckerberg's Internet.org, Google's Project Loon, and Qualcomm's recent partnership with startup OneWeb are all pursuing the same goal, but Musk's is the only one making use of extraterrestrial strategies. But given the ambitious nature of his project, the thus far unnamed Internet venture will be rather costly, both in terms of time and money. In fact, the entrepreneur projects that the entire initiative could take up to fifteen years and $10 billion to launch, but for Musk, the means more than justify the end.

And the end is even more zealous than widespread Internet access — rather, the ultimate goal is to take the Internet beyond planet Earth to the Red Planet, Mars. Musk told Bloomberg, "We see it as a long-term revenue source for SpaceX to be able to fund a city on Mars." With his plans already including the colonization of a Martian community in the near future, the next logical step seems to be to implement a communication system on Earth's neighbor. Said Musk, "It will be important for Mars to have a global communications network as well. I think this needs to be done, and I don’t see anyone else doing it." While this may seem like a fantastical science fiction dream, Musk's existing accomplishments have already far outpaced many skeptics' expectations. After all, SpaceX's rockets, while still in need of perfecting, have already made their way to the International Space Station, and Musk is also currently working on Hyperloop, a revolutionary high-speed tubular transportation system.

Later this year, the inventor is expected to unveil details about his plans for a settlement on Mars, and plans to put humans on the planet by 2026. Musk has long vocalized the opinion that the manifest destiny of the human race will lead us beyond Earth, and that migration to Mars is key to the species' survival. At a conference in May of 2013, Musk noted, "Either we spread earth to other planets, or we risk going extinct. An extinction event is inevitable and we’re increasingly doing ourselves in."

Be that as it may, there are those who maintain doubts about the viability of Musk's grand vision. Virgin founder Richard Branson, for one, does not believe that Musk's satellite Internet plan will work, saying that he does not believe SpaceX has the "spectrum to create such a network, let alone any space in the air where its hundred-plus satellites could live." But with Musk's track record, it seems that he will find a way to make it work. At least, I hope so — moving to Mars could be a good change of pace.