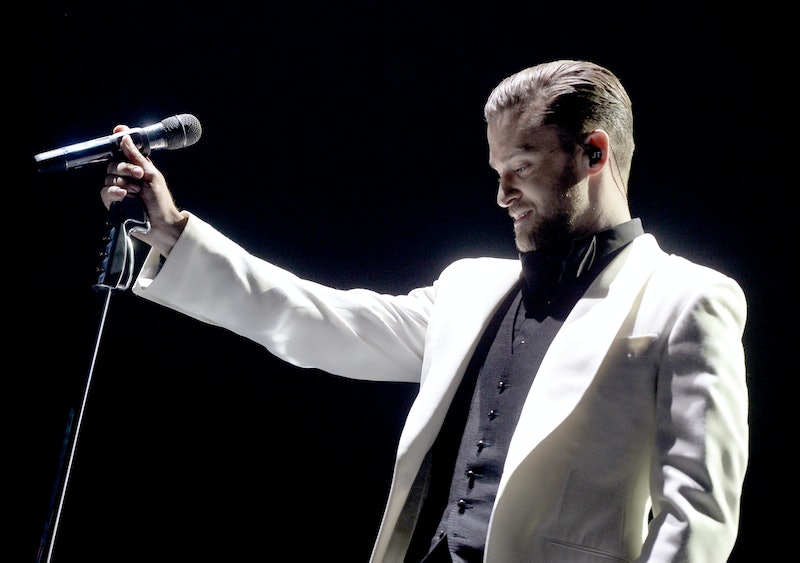 Turns out, all those people who hated Justin Timberlake's newest album were not at all comparable to the masses of people who loved it: According to The Hollywood Reporter, Justin Timberlake's album The 20/20 Experience is the highest-selling album of 2013, beating out other big-name artists like Beyoncé, Katy Perry, Miley Cyrus, and Drake for the top spot. The top-selling song was reportedly Robin Thicke's "Blurred Lines," but don't let that ruin this awesome news for JT!

The news was revealed via Nielsen SoundScan, which analyzed the sales of 2013's biggest albums. According to the list, 20/20 Experience is the only album to have sold over 2 million copies in 2013, with a total sale number at about 2.43 million between Dec. 31, 2012 and Dec. 29, 2013. The second-biggest selling album is, unsurprisingly, Eminem's genius The Marshall Mathers LP2, with 1.73 units sold in 2013. Third best-selling album is Luke Bryan's Crash My Party, with 1.52 million units sold.

So after shocking the Internet by dropping her album with no prior promotion, where did Beyoncé's new self-titled album place? Though it's worth noting that the album dropped very late in the year (and thus did not have the same head start as, say, an album that debuted in March did), Beyoncé placed 8th on the list, with 1.3 million units sold. Right above Beyoncé is Drake's Nothing Was the Same, with 1.34 million units sold.

Congrats, JT! Hopefully, he takes this as an indication to make more music, and not to wait another six years before releasing a new album.