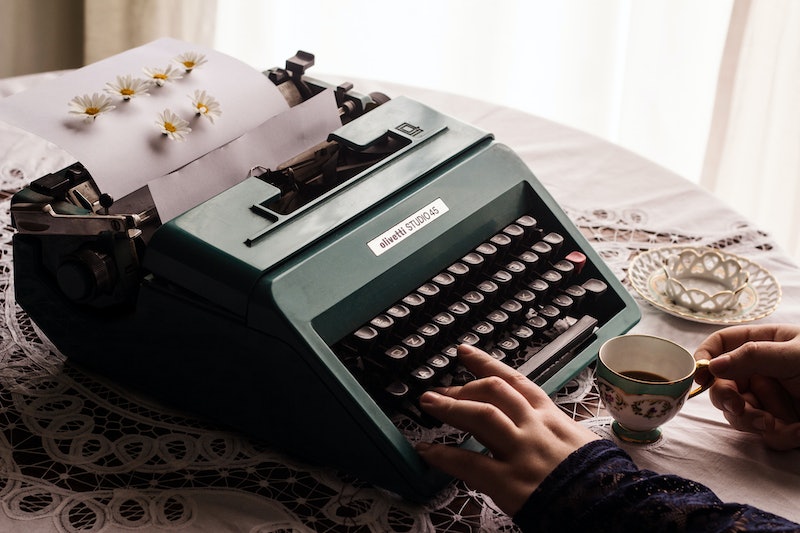 Every writer wishes inspiration would strike her like a lightning bolt in the middle of a thunderstorm. Writing would be easier that way. You'd have an idea, and the energy to keep going; nothing could stop you! Unfortunately, it usually doesn't work that way.

With NaNoWriMo right around the corner, you're either at the stage of feeling overly prepared with cork boards full of character names, plot lines, and other miscellaneous ideas — or you're panicking. As a frequent NaNoWriMo participant, I've been in both places. The panic stage is inevitable, because mid-way through November, you'll hit a rut or an exhaustive state. But don't worry, because you still have time to prepare. And if you're lacking inspiration, I've got just the cure.

One thing famous writers do best (aside from writing, of course) is talk about the process of writing: How they find inspiration, why they write the things they do, and how in the world they keep up with it all. From starting a novel to finishing it, writers like Toni Morrison and J.K. Rowling have bestowed us aspiring writers with some of the best advice anyone could hope for. So whether you need a little inspiration boost now or towards the end of November, here are 12 amazing writers on how to stay motivated and keep writing:

"It begins with a character, usually, and once he stands up on his feet and begins to move, all I can do is trot along behind him with a paper and pencil trying to keep up long enough to put down what he says and does."

Once you've found your main character, follow her or him like your life depends on it. And always keep a pen and piece of paper close by.

"The best time for planning a book is while you're doing the dishes."

Procrastination is a writer's second best talent, so while you're cleaning or doing things around the house, focus your thoughts on your story and you might be surprised by how inspired you feel afterwards.

Run with the crazy concepts and ideas that gather in your head, and don't look back!

"Write freely and as rapidly as possible and throw the whole thing on paper. Never correct or rewrite until the whole thing is down. Rewrite in process is usually found to be an excuse for not going on. It also interferes with flow and rhythm which can only come from a kind of unconscious association with the material."

"‎If you want to be a writer, you must do two things above all others: read a lot and write a lot…reading is the creative center of a writer’s life…you cannot hope to sweep someone else away by the force of your writing until it has been done to you."

While reading a few novels during NaNoWriMo can be a difficult challenge, you still have a chance to fit in a book or two that'll inspire you before November hits. Or, if you know of a book that always inspires you, pick it up and reread it as soon as you can!

"Be ruthless about protecting writing days, i.e., do not cave in to endless requests to have 'essential' and 'long overdue' meetings on those days. The funny thing is that, although writing has been my actual job for several years now, I still seem to have to fight for time in which to do it. Some people do not seem to grasp that I still have to sit down in peace and write the books, apparently believing that they pop up like mushrooms without my connivance. I must therefore guard the time allotted to writing as a Hungarian Horntail guards its firstborn egg."

The trick to finishing NaNoWriMo is to keep up with your writing days. Protect them just like J.K. Rowling advises and you'll be sure to finish on time with your very first draft.

"Inspiration is wonderful when it happens, but the writer must develop an approach for the rest of the time."

If you are lucky enough to be bitten by the inspiration bug, go with it. But like all things, it won't last forever, so make sure you find a way to stay motivated.

"The great advantage of being a writer is that you can spy on people. You’re there, listening to every word, but part of you is observing. Everything is useful to a writer, you see—every scrap, even the longest and most boring of luncheon parties."

Need to write but have to attend a family reunion? Don't fret, just use it as research time and focus in on conversations for dialogue and outfits for physical descriptions.

"The one ironclad rule is that I have to try. I have to walk into my writing room and pick up my pen every weekday morning."

You would think writing everyday is a simple task, but even for the most iconic writers, it can be a difficult task to do.

"I’ve often said that there’s no such thing as writer’s block; the problem is idea block. When I find myself frozen — whether I’m working on a brief passage in a novel or brainstorming about an entire book — it’s usually because I’m trying to shoehorn an idea into the passage or story where it has no place."

Facing idea block? Don't force an idea if it just isn't working. Take a step back, write out your thoughts, and find a new idea to go with. It'll probably end up being better and more exciting than your first.

"If you wait for inspiration to write; you’re not a writer, you’re a waiter."

"If there's a book that you want to read, but it hasn't been written yet, then you must write it."

This is one of my favorite quotes of all time. If there's one way to get you to sit down and write out the book in your mind, Toni Morrison explains how. Write the book you want to read, and if you keep that in mind, NaNoWriMo will be a breeze.