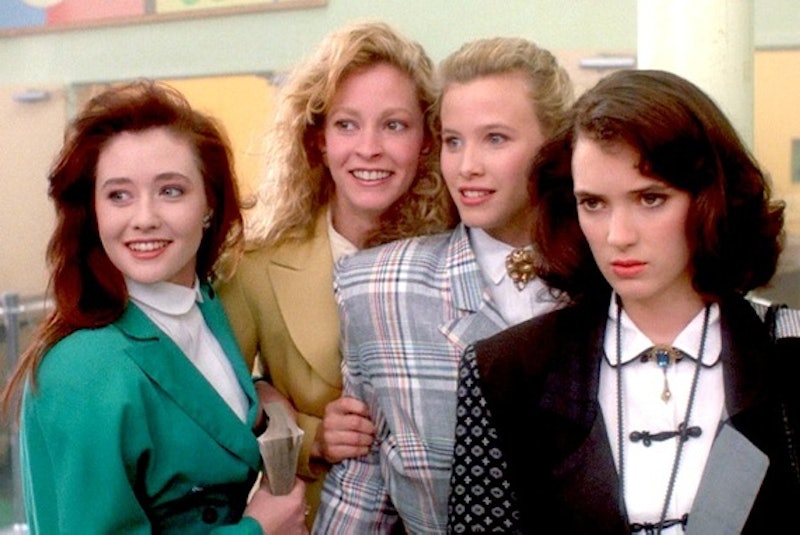 When thinking of 1980s beauty routines and fashion choices, I have a pretty romanticized idea of the decade. To me, it was all feathered bangs, snapping gum bubbles, sneakers with pencil skirts, and shoulder pads. The jewelry was big and jangled, and the evening-wear excitingly gaudy and shimmering. As for the beauty routine, I can just imagine the typical '80s woman waiting for her coffee to brew, swiping on blue eyeshadow, and adding the electric color up to her heavily penciled brows. Before she runs out the door in her white sneakers, she ties the whole look together with a layer of hairspray.

I'll admit that the version in my head probably isn't as glamorous as the real deal, but it's still fun to think about. Reading Nora Robert's Lessons Learned , however, hasn't helped me get that reality check when it comes to the '80s beauty routine. Instead, it's made me want to grab the nearest business-woman-red lipstick within arm's distance and get to climbing the corporate ladder.

The book centers around Juliet Trent, a rising publicist whose new assignment is to coordinate a publicity tour for Italy's most famous chef. She was an '80s woman through and through: Independent, focused, and with a penchant for putting men on the back burner as she prioritized getting that corner office in New York. Just because she wasn't willing to be taken out for a long meal in a chi-chi restaurant didn't mean she didn't pamper and primp, though.

Here are seven examples of what our beauty and fashion routines would have looked like in the '80s, according to Nora Roberts.

1. Your Hair Would've Been A Big Deal, In Every Sense Of The Word

Big: That's all you need to know. There's no waking up in the morning and rushing out the door with bed head... unless the helmet coif from yesterday somehow kept its shape while you were sleeping. In the book, Juliet would sit in front of her vanity (because every woman had a vanity back then, right?), take out the teaser brush, and aim her aerosol like a weapon. Throughout the plot, her look is a very important tool for presenting herself as sophisticated and professional. It's how she hides the fact that she hasn't quite made it yet.

I had one question all through the book, though: How would a romantic interest run their fingers through that? It's an impenetrable fortress.

This is some Mean Girls hierarchy right here, but if your hair didn't reach impressive heights, you were immediately seen as a kid and undeserving of your stilettos. At one point, Juliet had to deal with a mishap at a department store where she was giving a presentation. The girl who helped coordinate things had her hair pulled back into a run of the mill ponytail. Naturally, that meant she was the equivalent of a sorority sister straight out of junior college.

She made Juliet want to pinch the bridge of her nose because of her inexperience, and the whole while we kept hearing about how her hair had the nerve to swing instead of stay in place as she tried to fix the setup. Give her a break Juliet, she's just a tyke.

And by tyke, I mean three years younger than you.

3. The Makeup Routine Would've Been Intense

There's no "natural is beautiful" thought process here. You're constantly powdering your nose, fishing out lipstick tubes from your purse, and skillfully feathering on eyeshadow in the back of a taxi cab, like Juliet did. After all, professionalism is the name of the game, and you can't exactly wow a big level client with a bare face, can you? That's reserved for Sunday mornings, not the nine-to-five grind. Her vanity would have her pots and tubes neatly arranged, even though the next day she had to pack it all up and go on the next leg of the tour. So give your Avon lady a call and stock up on your Mary Kay products. You've got a face to put on.

4. Your Wardrobe Was A Ticket To Better Days

You know the saying, "Dress for the job you want, not the job you have?" If I had to guess, my money would be on the fact that a woman in a corner office said these words just as her male assistant refilled her cup of coffee.

Even though Juliet was a mid-level publicist, she had big ideas of nabbing herself a key card in one of the big offices in Manhattan. She was one of those people with a five year plan, and to help her get there she had an armada of pencil skirts and sharp blazers that would lead the way. It was all smart business suits unpacked and neatly hung in hotel closets at every leg of the book tour, with primly buttoned collared shirts and stockings that ran like silk.

5. Your Sleepwear Was Luxe

Just because it's time to go to bed doesn't mean you jump into a baggy tee and a worn-in pair of pajama bottoms. You're a sophisticated woman. And that means in all areas of your life. In scenes where Juliet would be worrying in her motel room about how the tour was shaping up, she'd be pacing back and forth in thigh-grazing sleeping gowns and wooshing quickly to her planner with a silk robe that would flutter behind her.

Even if you'll be spending the next eight hours unconscious, it doesn't mean you can't look beautiful while doing it.

6. Your Perfume Was A Power Symbol

It seemed that as a general rule, the perfume of the '80s was over-powering, lingering, and packed with notes of sandalwood and danger. From what all the '80s ads I've seen suggest, a small spritz is the equivalent of power, sex, and will drive you to give handsome men long, hard stares from your taxi cab window.

In the book, Juliet's scent always went against her no-nonsense, cool businesswoman veneer. Here was something that hinted at the other side of the woman; the one who came out when the shoulder pads came off.

7. Your Guilty Pleasure Would Have Been Shoes

Women were bank rolling and too busy to get married, so all that income that was earmarked for a suburban home needed to find a new place to go. According to Nora Roberts, that place was shoes. Juliet's one big weakness was shoe shopping, and whenever she got too stressed or just wanted to relax, she'd pop into a department store. Being an independent woman who calls her own shots means you can now have an apartment bedroom completely dedicated to your stiletto collection.

On that note, perhaps things haven't changed so much after all.

More like this
10 Nail Trends That Perfectly Capture The Early 2000s
By Paris Giles
Madelaine Petsch's Beauty Routine Is All About Carving Out "Me-Time"
By Olivia Rose Ferreiro
The Best Skin Care Routine For Dry Skin, According To Derms
By Paris Giles
Ed Hardy-Inspired Cross Nail Designs Are Majorly Trending
By Danielle Sinay
Get Even More From Bustle — Sign Up For The Newsletter