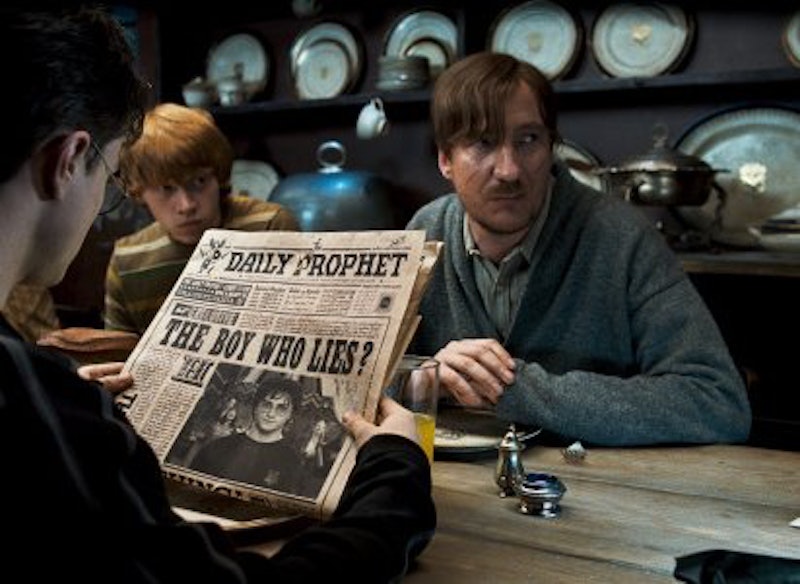 The Harry Potter series features a rich world full of awesomely diverse characters, and for the most part that means that there’s a wide range of characters from which you can choose a favorite. It’s super-easy, of course, to go for the obvious: Hermione Granger, Fred and George, or perhaps even Tonks (aka the coolest). It’s also quite easy to pick a least favorite, Umbridge (OF COURSE), Rita Skeeter, or Pansy Parkinson. Those are all easy choices, but what about those characters that everyone seems to love, but you just don’t get it? Of course there are a few of those.

I’m not going to say that I don’t love each and every one of these characters, but sometimes you just need to take an objective look at some of these people and come to the conclusion that they may not be the wonderful characters we thought they were. Perhaps even some of them are garbage people. (Yes, I'm going there.)

I’ve collected eight beloved characters from the Harry Potter series that may not be as awesome as we all think. Check them out… and you may end up agreeing with me.

Of course I will always remember the role that Hagrid played in the beginning of Harry’s wizard education. In spite of how delightful Hagrid is, let’s all be honest with ourselves. Hagrid has a bit of a problem with boundaries, don’t you think? Starting nearly immediately, he’s pressuring the kids to help him get rid of illegal dragons, come up with a legal defense for a hippogriff, and on top of all that openly shunned them when they dropped Care of Magical Creatures in order to focus on their N.E.W.T. level courses. This isn’t counting the fact that he smuggled a fully grown and dangerous giant back into England, and is so bad at keeping secrets that people immediately assume he’s spilled the beans when a plan backfires so badly that Mad Eye Moody dies. Hagrid may mean well, but he’s something of a liability.

The only reason that Oliver Wood is a beloved character is the fact that the actor who plays him in the films is a rather handsome gentleman. Other than that, what really is there to Oliver? When breaking down the character of Oliver Wood, can you list anything other than “likes Quidditch to the point of obsession”? You can’t. He probably didn’t even notice that Voldemort returned until the Ministry of Magic fell in Deathly Hallows.

I don’t care if he’s Harry’s godfather, Sirius Black is a complete and total jerk. Sure, he threw off the shackles of his rather racist family and became a Gryffindor instead, but he wasn’t exactly the best of people. From attempted murder to putting a horrible amount of pressure on Harry to be just like James Potter, it could be argued that Sirius’s death actually needed to happen in order to Harry to live his own life; not the life that his father could have had. Not to mention the fact that, for some reason, Lupin remains his friend even though Sirius set him up to murder Snape back when they were only children.

I don’t care what his patronus was, Severus Snape was not a good person. Yes, he was picked on in the wizard equivalent of high school by the future husband of the woman he was desperately in love with, but that does not even remotely excuse the fact that he treated a little boy who lost his parents like complete garbage. This isn’t counting his downright monstrous treatment of Neville, or his open contempt for Hermione. I don’t care if he was a secret quadruple agent at the end, if a teacher treated me that terrible solely due to the fact that my mom wouldn’t date me, I wouldn’t name one of my sons after him no matter how much of a hero he secretly was.

What are you even doing in Romania, Charlie? Don’t you know that there’s a wizard war going on in England? A war that your family is fighting? While Percy may be an outwardly awful person (at least in the beginning), at least he doesn’t need a dragon to show up.

For what it’s worth, Mrs. Weasley deserves total props for the fact that not only did she immediately step in as a mother figure for Harry without a single thought towards wanting his money or wanting the fame, and also for her amazing “Not my daughter, you bitch!” line when she killed Bellatrix Lestrange, sometimes Mrs. Weasley was a little bit… tiring. She snubbed Hermione in The Goblet of Fire solely over a couple of articles in Witch Weekly, she only really believed in the genius of Fred and George when it came to Weasley Wizard Wheezes, and let’s not forget her passive aggressive attempts to keep Harry, Ron, and Hermione away from each other so they couldn’t plan how they were going to set out and find the Horcruxes. All of these things really just make her human, which I think some fans need to remember.

The Entire House of Ravenclaw

For those who like to march off the beaten path a little bit with a favorite Hogwarts house, there’s Ravenclaw. It’s the house for those who love the idea of looking smart. However, with the notable exception of Luna Lovegood, name one character from Ravenclaw that didn’t turn out to be some sort of a jerk. Sure, Cho Chang can be excused a little bit due to the fact that she was working through some things during her brief, doomed romance with Harry, but a Ravenclaw ratted out Dumbledore’s Army. Sure “wit beyond measure is man’s greatest treasure,” but Luna Lovegood was teased by the members of her house so terribly that she ended up getting used to it. At the Battle of Hogwarts, when Gryffindor and Hufflepuff all stood together, it was house Ravenclaw who was divided. All in all, they’re really just Slytherins with better PR.

Admit it: Harry Potter himself is a bit of a jerk, and this isn’t even counting the angry caps lock-ridden rants that began in Book Five. He goes to a completely awesome magical school but still copies homework. He’s so wrapped up in his savior narrative that he doesn’t ever seem to realize that no matter what the people around him do, they are in danger. Harry pursued Cho Chang all during The Order of the Phoenix, back when Voldemort was probably at his most dangerous due to the fact that so few people believed in him, but he actually breaks up with Ginny only a few weeks into their blossoming romance due to the danger… even though her entire family (minus Percy and probably Charlie) is on the forefront of the war against him. Maybe that’s just foolishness on his part, or maybe he’s so wrapped up in the idea of being a martyr that anything good that may happen to him must be stopped. Sure, he saved the wizarding world, but that doesn’t excuse him from being a bit of a jerk.