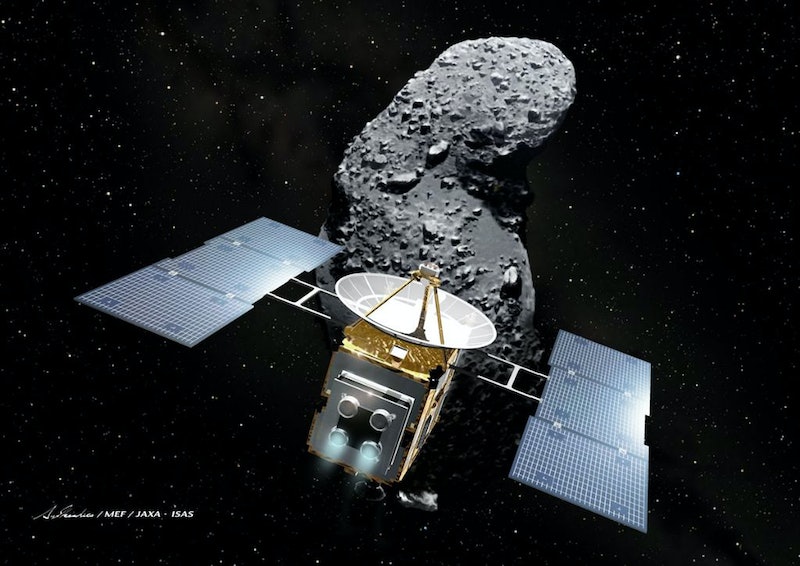 On Halloween, an asteroid the size of a skyscraper will pass by Earth's atmosphere, the first flyby of its kind since 2006. With the right conditions and the right equipment, you'll even be able to see it. If you miss out, though, you probably won't get another opportunity to see such a phenomenon until 2027 so here's how you can watch the Halloween asteroid.

Scientists discovered the asteroid, which is officially named 2015 TB145 on Oct. 10. It's large — anywhere from 920 to 2,034 feet in diameter — and moving at the "unusually high" velocity of approximately 22 miles per second. This high speed, combined with the erratic nature of the asteroid's orbit, made it more difficult for scientists to identify. Those same factors could also make it more difficult for us non-scientists to spot on Oct. 31.

Unfortunately, the asteroid won't be visible to the naked eye. The best way to get a clear view of it will be to use a telescope at northern latitudes in clear conditions. (Sure, that sounds like a lot of stipulations, but these things don't come around often, so you'll figure it out.) That being said, the asteroid will actually pass relatively close to Earth: Scientists expect it to come within 1.3 lunar distances of the planet. (FYI, 1 lunar distance = the distance from Earth to the moon.)

An asteroid further away than the moon might not sound nearby, but it's close enough to be exciting without posing a threat to our safety, scientists have said. The short notice, however, does raise the concern of whether or not we truly know what we are or aren't in danger of when it comes to space. After all, scientists just found out about this asteroid and its path within the last couple of weeks — and just three weeks before it's scheduled to pass us. Would we have enough time to prepare if we found out that an asteroid of 2015 TB145's size were actually supposed to hit Earth in three weeks or less?

The answer to that question is largely unknown, at least in part because we haven't experienced such a catastrophe. With just a few weeks' notice, the options for diverting the asteroid would be extremely limited. Perhaps a better game plan would be to invest more time and money into researching what's out there now so that we have time to prepare early.

Fortunately, there's no need to worry this time around. If you ever got a telescope as a birthday present, though, now is the time to dig it out and make the most of the event. NASA does not expect another asteroid of 2015 TB145's size to pass by our planet until 2027.

More like this
David Tennant’s Transformation In ITV’s 'Litvinenko' Is Astonishing
By Sophie McEvoy
Adam Driver & Joanne Tucker’s Relationship Timeline Starts With Cheese
By Jordyn Tilchen
'Waterloo Road' Is Back, With More Than A Few Familiar Faces
By Sam Ramsden and Vivian Iroanya
Mollie King & Stuart Broad Just Shared The First Pic Of Their Baby
By Sophie McEvoy
Get Even More From Bustle — Sign Up For The Newsletter