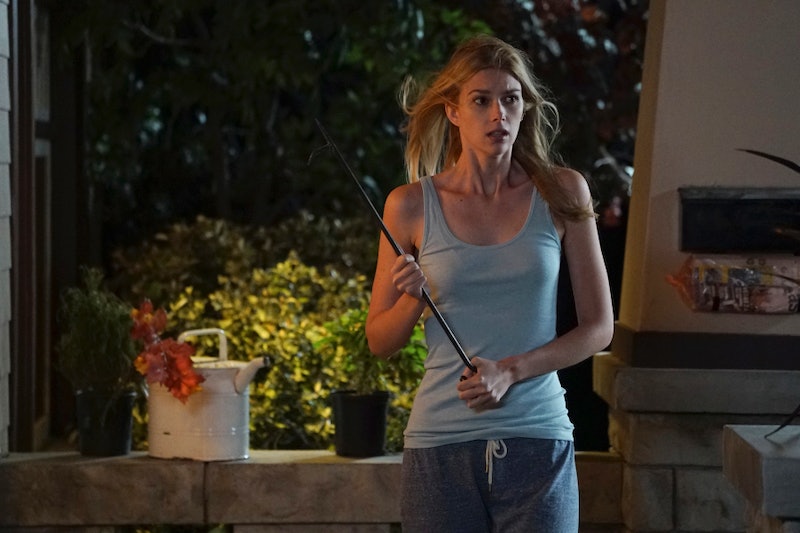 Stitching isn't an easy job, but someone has to do it. At least if we want to keep watching the supremely entertaining ABC Family series Stitchers. On the Stitchers Halloween Special that aired on Tuesday night, Kirsten, Cameron, Linus, Camille and their team investigated the disappearance of a young college woman and the suicide of a young man who might be involved in the young woman's disappearance. Now I can assume what you might be thinking, does this mean Cameron is alive? Does this mean that the Stitchers gang is all safe and are carrying on with their normal business as usual? Unfortunately no, the Halloween special is a standalone episode. But it does show us just how frightening their job can be, both inside and out of the lab.

The episode definitely embraced the Halloween spirit — which makes sense considering the special was part of ABC Family's 13th Nights of Halloween — and with that Halloween spirit, we also got a glimpse of the true scariness of stitching. The case of the week was centered mostly around Kirsten's psyche, interestingly enough. After stitching into the young man, Kirsten believed that he was talking to her in his memories. Frightened, Kirsten bounced out of the stitch, but things didn't get any less creepy. Later that night, Kirsten thought she saw the young man outside of her window. She then made her way to Cameron's apartment where once again she saw visions of the young dead man.

So what in the world is going on? It turns out there's nothing supernatural going on with the case and no mental issues with Kirsten. What she was really seeing was the young dead man's twin brother who began stalking Kirsten after she began investigating his brother's murder. The creepy twin, Gavin, even kidnapped Camille and attempted to kill both her and Kirsten before Kirsten outsmarted him and saved the day, with no help from the boys (have I ever mentioned how freaking cool it is that Kirsten is so badass?).

But even though there weren't any big mental problems with Kirsten, the case still provided an interesting look into Kirsten's headspace when it comes to scary things, and just how she reacts to science and things within the Stitchers program that she does not quite understand. Kirsten's first instinct was to go to Cameron's home, which makes sense as she needed moral support for her troubling supposed visions. But after she has time to regroup, she immediately springs into action. Kirsten was the only person who was willing to dig into a cadaver to grab the young woman's cellphone and she was the only one to go upstairs in the spooky house to eventually help save the young woman. So even at her most frightened, even in the creepiest of cases, Kirsten always comes out looking fierce and on top. That's the kind of character I can absolutely get behind as the show progresses into the sure-to-be exciting Season 2.