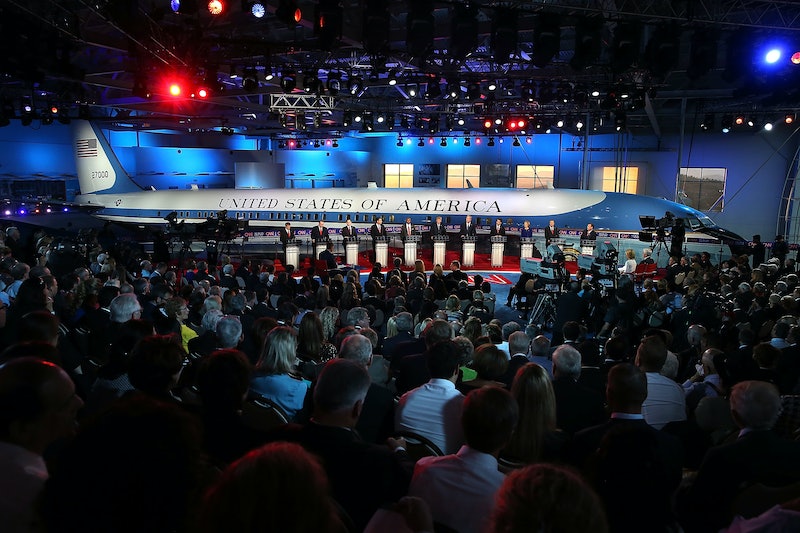 The third GOP debate is set to take place on Wednesday, Oct. 28, and already, the CNBC hosted event has seen a bit of a shakeup. Acquiescing to demands from both Republican frontrunners Donald Trump and Ben Carson, the financial network has decided to limit the debate to two hours total with commercials, which include half a minute dedicated to closing statements for each candidate in addition to an opening question meant for all 10 presidential hopefuls to answer. What else has changed is how candidates qualified to participate. So, who isn't in the third Republican debate?

CNBC's debate criteria states that candidate participation and eligibility will be determined by average polling data from ABC, Bloomberg, CBS, CNN, Fox, and NBC polls with data culled between Sept. 17 and Oct. 21. While candidates like Trump and Carson handily made it into their third consecutive primetime debate, lower polling presidential hopefuls like Bobby Jindal, Rick Santorum, Lindsey Graham, and George Pataki remain at the bottom, as their average polling percentage is less than 3 percent. Any candidate polling under 3 percent is stuck in the earlier "happy hour" debate while those with less than 1 percent on average will be ineligible for both debates. This requirement has forced former Virginia Gov. Jim Gilmore to sit out the event, which is to be held at the Coors Event Center at the University of Colorado, Boulder.

Aside from Gilmore, whose fate has been decided, Graham stood as the only other candidate to come dangerously close to being ineligible for both debates. Graham's perilously low polling numbers came as a major surprise given his strong performance at the CNN pre-debate forum just one month ago. According to Five Thirty Eight, prior to a CNN poll released on Tuesday, Oct. 20, Graham had yet to achieve more than one percent in any CNBC eligible poll. The CNN poll changed that and Graham got his 1 percent, bringing him to the CNBC pre-debate to occur prior to the prime-time showdown. CNBC confirmed this with the release of their candidate line-up the very next day.

Gilmore stands yet again as the only candidate in the 2016 election season stuck at home while his fellow presidential hopefuls debate. He barely registered on the aforementioned CNN poll that got Graham in, achieving 1 percent in hyper-specific categories that include independent voters and tea party neutral voters, which amounts to less than 1 percent of the total voters polled. Gilmore was absent from the CNN debate in September and proved to be a mildly entertaining commentator while watching from his headquarters in Virginia, tweeting about the event the entire evening. He's expected to assume his role as debate live-tweeter yet again for the CNBC debate. Here's hoping he doesn't go to bed early like Bernie Sanders or only provide retweets like Trump.