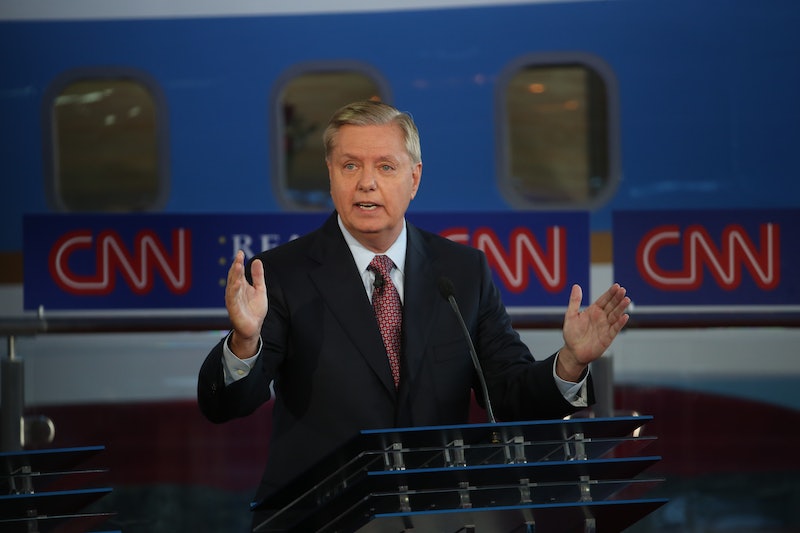 The pre-debate forum featuring the bottom four Republican candidates has officially wrapped up. Bobby Jindal, Rick Santorum, Lindsey Graham, and George Pataki all spoke their pieces and vied for America's attention. As opposed to the first pre-debate forum, the candidates took the stage to a relatively packed audience. The crowd at the Ronald Reagan Presidential Library did not go unnoticed by Graham, who immediately started out by joking about attendance. This set the course for a surprisingly humorous appearance by the South Carolina Senator. If anything, some of Lindsey Graham's best GOP debate quotes proves he's the most entertaining candidate out there. His statements also show an incredibly experience politician.

"One, thanks, CNN, for having people at this debate," Graham immediately said to laughter before launching into an introduction about himself as a candidate. He highlighted his past military experience as well as outlined his primary campaign focuses:

I'm the only candidate tonight who served in the military while Ronald Reagan was our president and our commander in chief. It was one of the highlights of my life. I'm running for president to destroy radical Islam, to win the war on terror, to protect you and your family. ... Above all others on both sides of the aisle, I'm most qualified to be commander in chief on day one — 33 years in the Air Force, 35 trips to Iraq and Afghanistan, I understand this war. I have a plan to win it, and I intend to win it.

Graham took a surprisingly progressive stance on immigration, siding with former president George W. Bush's reform policies and proclaiming that "Hispanics are Americans" after Santorum said "We need to win fighting for Americans." Some of Graham's most colorful language came from his response to questions on immigration reform. He referenced former South Carolina Senator Strom Thurmond in a thinly veiled insult against the current immigration system:

Strom Thurmond had four kids after age 67. If you're not willing to do that, we need to come up with a new immigration system.

Graham showed his conservative colors, however, when discussing how immigrants should better assimilate when coming to the United States. He was rather lighthearted when discussing issues of learning the English language, joking:

You got to learn our language. I don't speak it very well, well, look how far I've come?

Another moment of levity had Graham incredibly self-effacing when he touched upon about his experience studying law at the University of South Carolina. For Graham's credit, he was the first in his family to attend college. Graham joked:

I wasn't the best law student. By the end of this debate it'd be the most time I'd spent in any library.

The issue that Graham consistently touched upon was foreign policy and terrorism, specifically combating ISIS and other religious extremist groups. Strom Thurmond joke aside, Graham's strongest statements came from panning the current administration's approach to what he sees as an ongoing war on terror:

Number one, I will win a war that we can't afford to lose. I have a plan to destroy radical Islam because it has to be. These are religious Nazis running wild. President Obama has made one mistake after another.

Graham was the clear pre-debate winner in the minds of many. Even moderator and Salem Radio Network host Hugh Hewitt commended him for his performance. After Hewitt praised him, Graham got in one more joke about one of the ways he'd bring the American people together. Graham said: