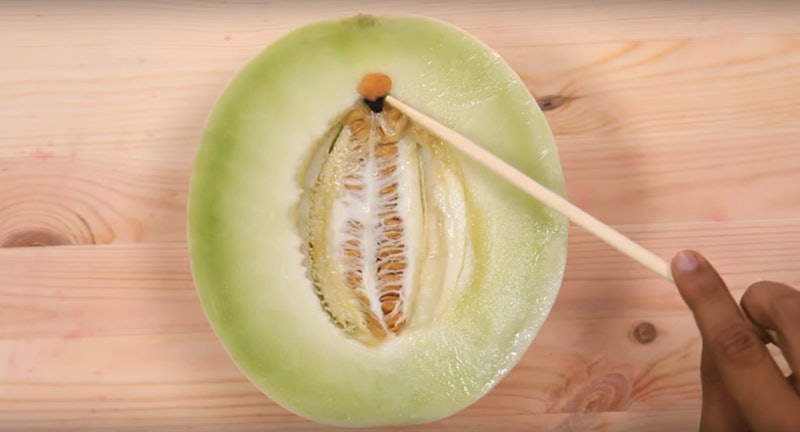 And though I don't endorse the Simple Pickup's pickup lines/pickup game generally, I have to say this video makes me happy. I don't know if it's groundbreaking, as Cosmpolitan notes it pretty much breaks down to "1) If a woman bleeds while you finger her, you are doing something wrong, 2) you've really gotta work the clit, and 3) no, really, the clit thing is important".

And I just love watching weird stuff with fruit. It's just a thing I have. In fact, a large part of watching this video was just me seeing if I was correctly identifying the fruit. Don't judge. We each have our own journey.

They looked at what 100 sexually active women like and here's what they learned, in fruit form:

Ninety percent of women liked being fingered— I was sort of surprised that it wasn't 100 percent. Also, I'm not so impressed by using raisins for the "MILFs".

Sixty percent said they needed more than penetration alone to orgasm— no surprise there.

This is actually important advice, as you will know if you've ever hooked up with someone who hasn't cut their nails. (Seriously. Please.). Although their other explanation for blood was the 'sex gods hating you' and the girl being on her period, which is ridiculous because we all know period sex is awesome.

5. Most Guys Don't Know What They're Doing

No girl wants to be that kiwi.

Gently rub the clit and build pressure slowly? Sounds good to me.

This doesn't not look so appealing, but there's maybe that's the honeydew.

9. BUT NOT TOO MUCH CLIT

They rightfully said you can't get mental with the clit. You need to work around it until the woman is wet enough and ready for...

I genuinely have no effing clue. I need to do some googling.

OK this is for real important: when the girl is moaning and happy and excited and near the brink— DO NOT CHANGE ANYTHING. Seriously. We like what you're doing, that's what's making us orgasm. Don't change it. It's so so so frustrating.

The pun speaks for itself.