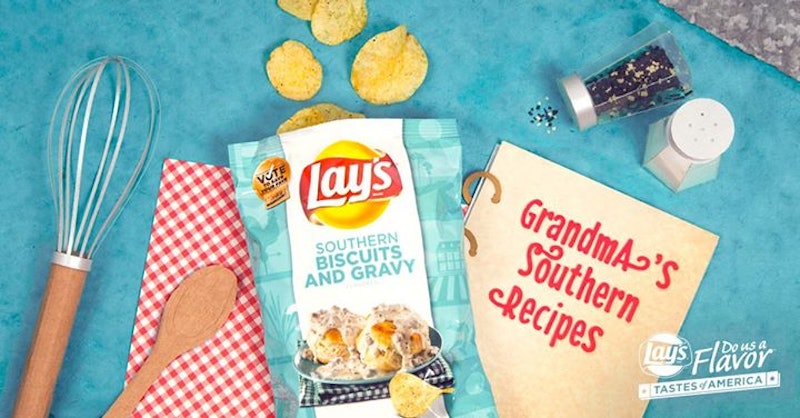 As a Southerner, I was admittedly skeptical when I heard Lay's had turned "Southern Biscuits and Gravy" into a potato chip. Surely, slivers of flavored potatoes couldn't come close to capturing the comforting goodness of this classic Southern dish my Grandma and Papa made for me growing up. But I've been wrong before and, well, I was pleasantly surprised that — in the case of Julie Sprankles' skepticism vs. Lay's "Southern Biscuits and Gravy" chips — I was wrong again. These chips make my taste buds sing, y'all. Do they taste exactly like my Grandma Hazel's? Obviously not, but that's to be expected. There's some delicious sorcery that goes on the kitchen of Southern matriarchs unbeknownst to the rest of us. Having said that, Lay's version comes as close to capturing that down-home taste as I imagine one could in chip form — so it's no surprise, reallym that this flavor has been dubbed the winner of the Lay's "Do Us a Flavor" competition for 2015.

Originally launched in 2012, the "Do Us a Flavor" competition was created as a clever marketing tactic to commemorate Lay's 75th anniversary. It's a fun concept: People submit flavor ideas they think would be chip nirvana, then Lay's combs through the submissions and creates a trial run of the four top flavors for the public to vote on. Over the years, we've tried everything from Sriracha flavored chips to ones inspired by Cinnamon Buns in the name of tapping into the best undiscovered chip flavor out there. This year's "Tastes of America" tour took us on a proverbial cross-country culinary tour, sampling Greektown Gyros, West Coast Truffle Fries, New York Reuben and — my obvious personal favorite and this year's victor — Southern Biscuits and Gravy.

Adding to this contest's cool factor is that the creator of the winning chip flavor each years scores a big ol' chunk of change to go along with their newfound chip-naming fame: $1 million dollars, to be exact, or one percent of the flavor's net sales through next July. And this year's winner is Hailey Green of Noblesville, Ind., who drew inspiration for the flavor from her own grandma's kitchen. "One of Hailey's favorite dishes is biscuits and gravy," said Lay's, "a recipe that was handed down in her family generation after generation." So cute! If she hadn't already won, she'd definitely have my vote. Besides, she's pretty gosh darn adorable. The creators of the three runner-up flavors won't do so shabby, either — they'll each bag a cool $50,000. If you look up "dream job" in an encyclopedia, Lay's Chip Flavor Creator could very well be listed.

So, since last year's "Do Us a Flavor" entries included Chicken and Waffles (also a popular submission) and this year Biscuits and Gravy were crowned king, it got me thinking about a few other amazing Southern foods that deserve to be memorialized in chip form. Lay's, you heard it here first.

You likely fall in one of two camps when reading this: someone who has never had shrimp and grits, isn't entirely sure what the latter even is, and thinks this sounds like a horrible, awful, no good idea; or someone who has experienced the divinity that is fresh shrimp drizzled (or swimming, per your druthers) in a buttery, bacon-laded sauce and resting atop a bed of stone-ground grits. This is life.

This is not just any cornbread. Skillet cornbread is cooked, as the name suggests, in a cast iron skillet — a method that is practically religion in the South. It's slightly sweet and almost cake-like in consistency. So, in short, it's everything you ever thought it could be and more. How one would go about translating that into chip form, I have no idea. But stranger things have happened, right?

Since pimento cheese — that glorious spread comprised of sharp cheddar, mayo, pimentos, and salt and pepper — is generally eaten with crackers or chips anyway, turning it into a chip would just make for one less step. It's such a distinctive flavor, it'd certainly be a hit. As they say, it is the caviar of the South.

Before you freak out, no, Frogmore Stew does not contain actual frogs (although, come to think of it, Frog Legs might make a great flavor, too...). If ever you come to Charleston, give me a holler and I'll make sure you make it to a party, backyard barbecue or other event where this classic combo of fresh local shrimp, just-shucked yellow corn, redskin potatoes and sausage is being served. Or, you know, Lay's could just turn it into a chip.

There's a reason fried green tomatoes are a thing of lore — they're phenomenal. Long before the movie put this dish on the map, fried green tomatoes were famous in the South for their mouthwatering flavor. Would it convey in a chip? It would be a challenge to capture the nuances of green tomato, buttermilk, corn meal and more, that's for sure.