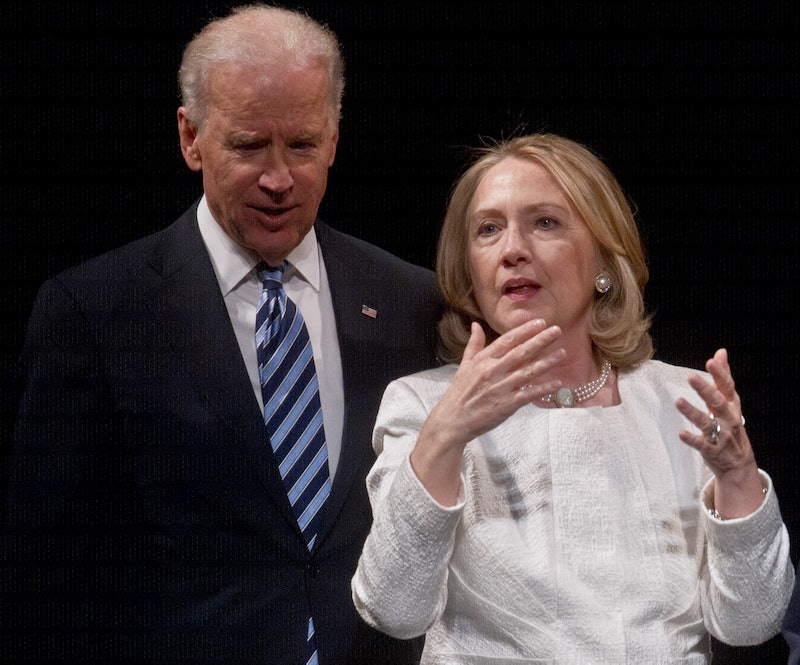 On Wednesday afternoon, Vice President Joe Biden announced that he will not run for president in 2016. Though he had never indicated his intention to run in the election, many people had speculated that he would eventually join the Democratic primary race. Biden delivered his announcement on his own — President Obama was by his side during his statement at the White House Rose Garden, but Biden was the only one who spoke — but it wasn't long before the 2016 presidential hopefuls started weighing in on the news. Former secretary of state and 2016 presidential hopeful Hillary Clinton tweeted about Biden's big announcement Wednesday: "@VP is a good friend and a great man. Today and always, inspired by his optimism and commitment to change the world for the better. -H."

During his announcement Wednesday, Biden said that there's no right or wrong timeframe for a grieving family, referring to the death of his son Beau in May. Rumors had swirled that Beau Biden wanted his father to run for president in 2016, but Biden said: "As my family and I have worked through the grieving process, I've said all along what I've said time and again to others. It may be that that process ... closes the window. I've concluded that it has closed."

In a statement later, Clinton said:

Serving alongside him in the Senate and then the [Obama] administration, I saw first-hand his passion for our country and our people. Like millions of others, I admire his devotion to family, his grace in grief, his grit and determination on behalf of the middle class, and his unyielding faith in America’s promise ... I am confident that history isn’t finished with Joe Biden," she added. "As he said today, there is more work to do. And if I know Joe, he will always be on the front-lines, always fighting for all of us.

Clinton's kind words about Biden's announcement shouldn't come as a surprise. The pair are reportedly close friends, even though they both ran for the Democratic presidential nomination in 2008. Biden and Clinton have also both served in the Obama administration, and have similar views on many policy issues. And while some prominent Democratic donors had encouraged Biden to run, the pair's support base is largely similar.

As Politico noted, Clinton has a "strong lead" in polls of likely Democratic primary voters, and Biden's decision is "likely welcome news" for her campaign. But Clinton's response to Biden's heartfelt speech shows that political candidates don't have to be vicious to one another. There's always a tactful way to respond to new developments, even if in this case, the development in question does benefit her presidential ambitions.