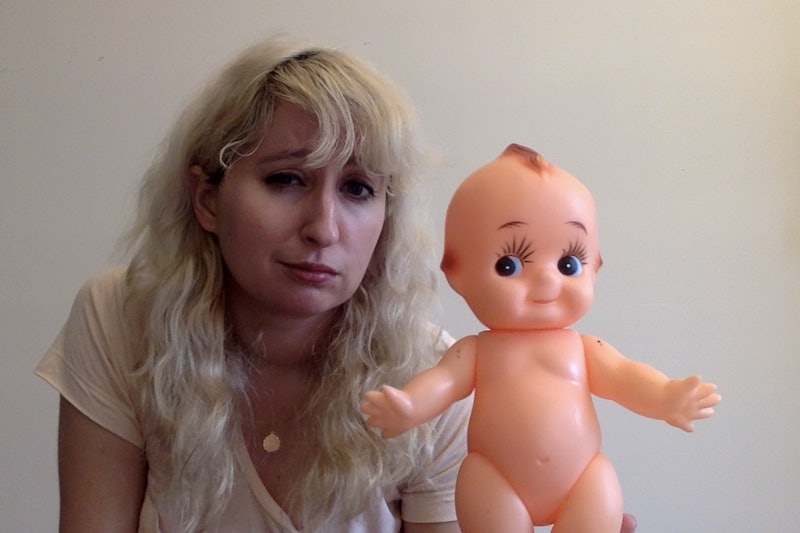 As a woman who spends a certain percentage of my life publicly noting that I don't want to have kids, I also spend a certain percentage of my life wading through insults from strangers about how disgusted they are by me and my fallow uterus: you don't know what you want, you'll regret it on your deathbed, it's bad for society, blah blah blah. I barely consider most of these comments to be insults. Like, of course I'm always looking for new ways to bring about the collapse of society! Who isn't?

But there is one insult that manages to stick in my mind — not because it's any smarter or more insightful than the others, but because it picks at my particular neuroses: when strangers tell me, without kids, you'll end up alone, I have to admit I worry that they are right.

The idea that a woman will be punished for her independence by being "left alone" with no child or partner has been around for a long time in the concept of the "spinster"; in fact, it has been kicking around for so long that some feminists have done some great work reclaiming the word and the idea of spinsterhood as something to be celebrated (though we're still pretty far from getting that definition accepted by the mainstream).

But in recent years, we've seen the rise of a sister stereotype: the woman who once had a partner, but is now left "alone" because she refuses to have his (or anybody else's) children. (I'm speaking in terms of heterosexual stereotypes here because those are the ones that I'm most familiar with — I'm sure that there are similar but different pressures on queer women who don't want to have kids.)

She's a new riff on the traditional anti-feminist spinster imagery — she's usually painted as so focused on her career that she is blind to what is "truly important" in life — but instead of being inherently unlovable or lonely, she's said to be selfish. For this reason, it's a little tougher to turn this trope on its head into a celebration of empowered womanhood. The new anti-feminist folktale says, this kind of woman may seem appealing on the outside, but inside, she is ugly, and anyone foolish enough to partner with her will one day realize this and run away.

It's telling that this stereotype has gone into full bloom over the past few years, as we've reached record numbers of women refraining from procreating. Lots of cultural commentators link our dropping birthrates — 47.9 percent of women between the ages of 15 and 44 have no children, an all-time high, and 28.9 percent of women 30-34 remain childfree — with dropping marriage rates, rather than an actual sharp decline in the amount of women who want to have kids.

Yet the number of people who voice their desire to stay intentionally childfree remains low — five percent of adults said that they didn't want children in a 2013 Gallup poll, a number virtually identical to the number of adults who said they didn't want kids in 1990 — as does the number of women who are married and childless (only six percent of married women were reported to be childfree between ages 40 and 44 in 2010). Add in the fact that 80 percent of men report thinking that they'll have kids someday, compared with only 70 percent of women, and you have a confusing landscape of figures about our changing world that no one has quite made sense of yet.

As usually happens, into these gaps rush misinformation and stereotypes — like the idea childfree women are so obsessed with their careers and themselves that they refuse their partner the offspring he is entitled to, eventually driving him off. That's certainly been the media narrative behind a number of last summer's high profile celebrity break-ups — the break-ups between Jon Hamm and Jennifer Westfeldt and Miranda Lambert and Blake Shelton, respectively, have been largely reconfigured into a story about how he wanted children, and she denied them to him.

I'm embarrassed to say this, but the Hamm-Westfeldt split hurt me more than it had any right to. Hamm and Westfeldt were among my celebrity role models — a couple who had seemed to be in love, but had never had kids. It's a list that seems to be getting shorter with every passing year, due to breakups or childbirths — Zooey Deschanel, who at one time popped up on many a "childless by choice celebrities" listicle, had her first baby this fall; Eva Mendes, who once straight-up said "I don't wanna have kids," changed her tune as soon as she got near Ryan Gosling's presumably extremely photogenic sperm; the resolutely childfree Margaret Cho recently divorced. Some days, it feels like the only people who are 100 percent cool with loving each other without any offspring are Ellen and Portia.

Of course, this trend of breakups between men who want kids and women who don't isn't limited to celebrities. Advice columns seem to be regularly littered with letters from panicked men who thought their spouse or girlfriend would change her mind on the kids issue; and a 2012 music video — created by former romantic partners Jonathan Mann and Ivory King, dealing with the fact that King and Mann were breaking up after five years together because he wanted children and she didn't — went wildly viral.

During an ill-considered conversation with my now-estranged mother a few years back, I had mentioned that my boyfriend and I were thinking about getting married for some pretty common reasons — I didn't want anyone to keep us out of each other's hospital room in an emergency because we didn't have some piece of legal paper.

My mother — who told me a decade ago that if I didn't have children, "no man will want you" — thought for a second, and then said, "If you're not having kids, what's the point?" The fact is that we live in a world where marriage and babies are seen as a package deal, by many people on both sides of the equation. When you couple up with someone, there's an expectation that your stance on having kids will change — and if it doesn't, among some people, there's an expectation that you've set a timer on your own relationship.

My boyfriend, Jesse, and I have been together for five years; we're the kind of super irritating couple that says things like, "We're not legally married, but we consider ourselves spiritually married." I love him with a ferocity I believed was impossible before we met. And when we got together, I doubled down on my desire to not have kids. Now, I not only don't want kids for all the reasons I've always felt — I don't feel like I have the emotional stability or patience to successfully shepherd a vulnerable human being to adulthood — but I also don't want kids because I can't stand the idea of ever loving anyone more than I love Jesse.

Before we met, love was mostly a confusing abstract idea for me, and I read stories of women who reported loving their children more than their husbands as dispassionately as I would a weather report. But after we fell in love, I read those stories as if they were horror tales. A 2012 study that revealed that 75 percent of women loved their children more than their spouses made intellectual sense to me, but the idea of that happening to me made me sick.

Jesse's love has saved my life and transformed it into something worth living. The idea of potentially weakening that love with a child sounds insane to me. Raising a child has never sounded like a good idea to me — but, ironically, falling in love turned it into an actual ironclad impossibility.

But sometimes, when I'm up in the middle of the night, slow-cooking through another episode of insomnia, I wonder. I know that my desire to not have kids frees Jesse to build a life that makes him happy, rather than one focused on providing for a child. But he was involved with women who wanted children before we met. And sometimes, I worry. What if everyone is right, about biological drives and urges, about romantic love just being a delivery device for children? I don't understand a lot of things about life that seem to make sense to pretty much everyone else — what if this is just another one of them? My boyfriend tells me I'm being silly, that he loves me more than anything, that we're on the same team. I know this. But I hear so much to the contrary, from so many people, that I seem unable to shake my fears.

When I begin to think of it this way, I realize that both stereotypes are the same thing: attempts by the world to shame women for wanting or not wanting anything at all, for having a need that they know is important to them, and insisting that it be met. This is why women have to politicize our choices: because there are still so many people who don't want us to make any choices, period.

Will I ever shake my fears completely? Probably not. I'm a fearful person by nature; I waste hours of my life every week worrying about inhaling a rare poisonous spider in my sleep, so I doubt that I'll be able to shuck this worry off any time soon. But what I can do is feel the fear, and choose to live my life the way I want to, anyway.

More like this
Why You're Seeing Green Bandanas At Abortion Rights Protests
By Lexi Inks
How To Come Out Online, According To Trevi Moran
By Melanie Mignucci
Hayley Kiyoko Loves A “Cry Sesh”
By Jake Viswanath
J.Lo Calls Ben Affleck “The Most Consistent & Selfless” Dad On Father's Day
By Jake Viswanath
Get Even More From Bustle — Sign Up For The Newsletter