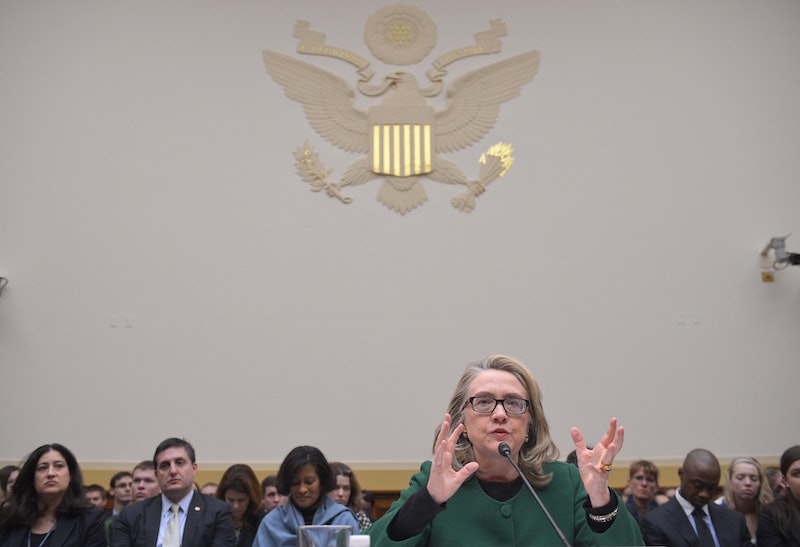 Hillary Clinton will be testifying in front of the House Select Committee on Benghazi on Thursday morning. The Democratic presidential hopeful has previously faced questioning over the 2012 incident in which four Americans, including CIA security agents and an ambassador were killed following the violent attack of a U.S. diplomatic and intelligence compound in Libya. This time, however, Clinton will be answering questions as she seeks the highest office in the land. It's a particularly important moment for both Democrats and Republicans. Here's how to watch Hillary Clinton's Benghazi testimony.

Clinton's testimony is scheduled to start at 10 a.m. ET on Thursday, Oct. 22. A live broadcast of her statements will be presented on both C-SPAN 3 and CSPAN.org. A replay of the testimony will be broadcast that evening at 8 p.m. on C-SPAN 2, along with one additional showing on Saturday, Oct. 24 at noon. Assuming that ABC News' assessments are correct and that questioning and testimony alone will last at least eight hours, it may be possible to marathon your viewing of Clinton's statements from one broadcast on C-SPAN 3 to the next one on C-SPAN 2. That time span does not take into account necessary breaks or votes.

Clinton's appearance before the House Select Committee on Benghazi comes nearly one week after longtime aide and friend Huma Abedin was questioned for six hours by the committee. While Clinton played a pivotal role by simply serving as the secretary of state during that time, Abedin had little, if anything to do, with events leading up to the attack in Benghazi or its aftermath. According to Democratic Maryland representative and committee member Elijah Cummings, she had "no policy responsibilities, no operational responsibilities" and wasn't even with Clinton at the time of attack.

Nonetheless, Abedin was questioned behind closed doors on Friday, Oct. 16. The following Monday, House Democrats released a 146-page report bolstering the claim that Clinton did not ask the military or Leon Panetta, the Defense Secretary at the time, to stand down nor did she authorize security reduction. Countless interviews from previous Benghazi testimony point to no evidence of Clinton attempting to cover anything up in regards to the attack. Instead, Democrats have criticized the Republican Party for deliberately wasting taxpayer money in an effort to somehow harm Clinton's political campaign.

Clinton's testimony may prove just as important for what it means for her during the 2016 election season as it does for an investigation that has dragged on for years. By the way, this is the eighth major Benghazi investigation to have taken place.