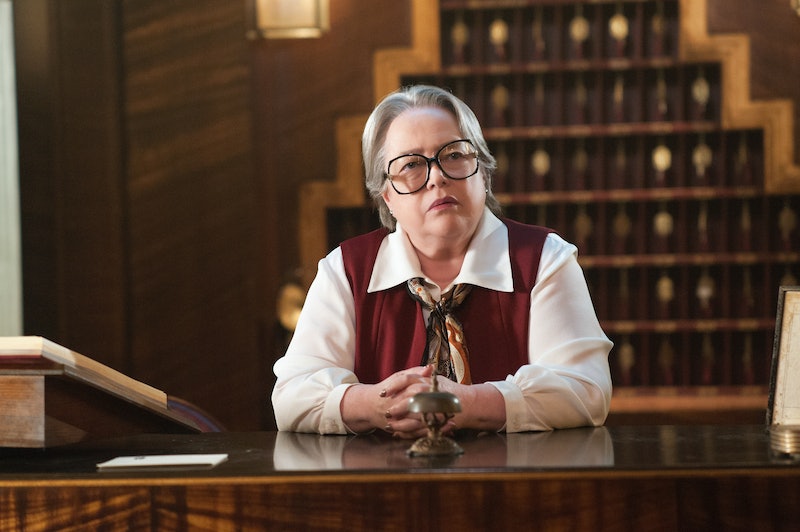 We've seen the legendary Kathy Bates play many memorable roles throughout her impressive career, but now American Horror Story: Hotel has chosen to give her a challenge of supernatural proportions. I might as well just come right out and say it: Kathy Bates' AHS: Hotel character, Iris, is now a vampire. Or, at least, that certainly looks to be the way things are headed, and I can't wait to see where this unexpected twist leads. But let's back up for a moment here… After basically getting kicked to the curb by her son, Donovan, who is still super pouty about his breakup with The Countess, Iris decides to take his suggestion and end her life. If she didn't have his love, then she didn't see the point of sticking around. And Hypodermic Sally was more than happy to oblige her request.

But after getting an earful of real talk by Denis O'Hare's Liz Taylor, Donovan decided to try and make amends with mommy dearest. The only problem with that plan, though, was that it came too late. Iris had already past away by suffocation via a plastic bag. (She tried overdosing on drugs first, but apparently that didn't take.) Donovan was devastated, knowing that it was all his fault. So he did the only thing that he could think of — he fed Iris his vamp virus-infused blood, which is apparently the only necessary step when it comes to making a vampire. (Step 1: feed the intended victim your blood. Step 2: you're done.)

So now that Iris is looking to be our newest vampire-in-training, it'll be interesting to see how the dynamic shifts within the hotel. Up until now, The Countess has been the only one to decide who gets infected with the virus. (Remember what happened when Ramona decided to go rogue and turn someone?) So I'll be curious as to how she'll handle welcoming this newest addition into the fold. But even if Gaga's character wants to do away with her, I doubt it'll be that easy. If life has taught us anything it's that you never mess with Kathy Bates. And now that she's been given supernatural capabilities, she'll be quite the force to be reckoned with. And to that, I say: BRING IT ON!