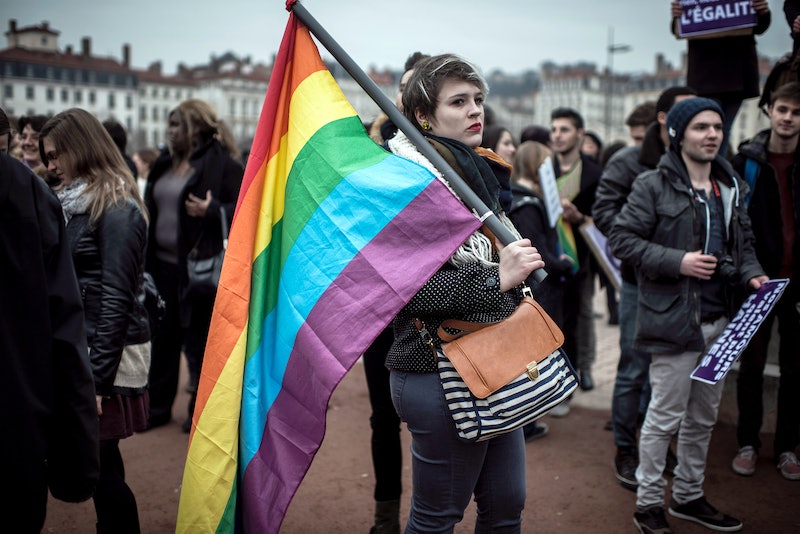 On Thursday, The Guardian published an op-ed by Noah Brown, a college-aged person who identifies as LGBT and is also homeless. He has a high school degree, and received a full scholarship to the University of the Arts in Philadelphia two years ago when he graduated from high school. But Brown said he matriculated at a Christian college at his mother's request. Eventually, he became "confused, irritated, restricted and unhappy," so he cut ties with his family, and his parents revoked their financial support. Brown lost his job at one point, and was then evicted from his apartment. Now he couch hops, and is working with a local shelter to get back on his feet.

Brown's problem isn't an isolated incident. Nearly 40 percent of homeless youth in the U.S. identify as LGBT. How can you help these homeless LGBT youth in America? There are a few key ways you can become more involved in this overlooked issue.

In April 2014, the Ali Forney Center, which helps homeless LGBT youth, wrote an open letter to Pope Francis in The New York Times. The center pleaded with Francis to change the church's stance on same-sex marriage and LGBT people, which it says causes religious parents to cast out their LGBT children. Carl Siciliano, Executive Director of the Ali Forney Center, told The Huffington Post that intolerance and homelessness for LGBT youth are often inextricably linked:

I want the pope to recognize that by refusing to rethink the homophobia and transphobia that has been enshrined in church doctrine he is enabling the abuse and destitution of LGBT youths all over the world. I want this to be recognized as violating the core teaching of Jesus recorded in the Gospels that we are to be loving, compassionate and merciful to one another, and that we are to recognize the presence of Christ in those who suffer.

The issue is heartbreaking, and often overlooked because, well, it sometimes seems like people don't care about the effects of homelessness, or about the homeless. And as Brown pointed out in his essay, homeless youth "are resourceful, connected and do our best to blend into the crowd so we are not seen." Further, this invisibility problem is added to by the fact that refusing to accept LGBT people and their orientations is still considered acceptable in our society. It's fine to choose not to do your government duty, as in Kim Davis' case, if you're objecting on religious grounds. Religion trumps acceptance in the U.S., so it makes sense that LGBT homeless youth go unacknowledged — or even worse, that people think they deserved to be thrown out for disobeying their parents or their religious community.

Brown described his educational goals, which include law school and becoming an advocate for LGBT youth, and come at a cost:

I’m still committed to the values my mother instilled in me: to serve, be honest, love God and put up a fight for what I want. But I had to leave the people I loved to finally be myself.

How Can You Help?

If you want to help LGBT youth in the U.S., you can start by being accepting of their sexualities and identities. Don't tolerate bigotry or hateful speech, and stand up to people you know who claim that sexuality is something you have control over. (Did you choose to be straight when you were born?)

You can donate to organizations like the Ali Forney Center or the National Coalition for the Homeless. You could also focus on local organizations, which often don't have the name recognition that national organizations garner. For example, if you live in New York City, you could donate to the Trinity Place Shelter.

If you want to get more hands-on, then look up a local shelter for LGBT youth near you and check out their volunteer opportunities. Often, organizations like Ali Forney need volunteers to help prepare meals and coordinate programs and holiday events for young people. Some organizations even have wish lists of items that the shelter really needs.

Finally, if you think this issue needs more attention, voice outrage about it often. Share articles about homeless LGBT youth on social media, and draw attention to studies that show that LGBT youth are more often mistreated by police. The more people you can inform, the closer we can be to a world where young people won't have to be afraid of losing their beds because of who they are.

More like this
An Honest Review of MeUndies Boxers, According To A Non-Binary Person
By Megan Lasher
There’s A Brand New Drag Race Spin-Off & It’s Dropping Very Soon
By Sam Ramsden
Mel B Speaks Out Against Domestic Violence In A Powerful Speech
By Sophie McEvoy
Chris Kaba's Family Continue Fight For Justice After Viewing Police Bodycam Footage
By Sophie McEvoy
Get Even More From Bustle — Sign Up For The Newsletter