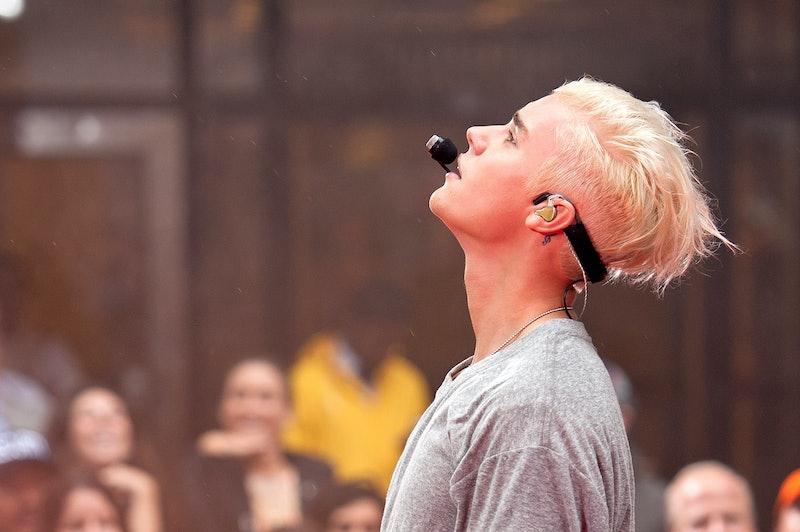 We have officially entered the age of the Bieber renaissance — the "Bieberenaissance," if you will. After a few years of little music and a whole lot of bad choices, Justin Bieber has finally gotten his groove back — and it's brought along some grooving-inducing music with it. Bieber just released his new single "Sorry" via a dance video, and it's a great reminder that, apart from all the chaos in his life, he creates some pretty fantastic music. "Sorry" is the catchy pop track that you'll hope comes on next time you're out dancing, though few people can dance as well as the people featured in Bieber's video. (Seriously, their isolations are amazing.) While the dance video is pretty much perfect, though, it doesn't take away from the real question: who is the song "Sorry" actually about? Because, despite lyrics like "I know you know that I made those mistakes maybe once or twice/ And by once or twice I mean maybe a couple a hundred times/ And let me, oh, let me redeem myself tonight/ 'Cause I just need one more shot at second chances," and "Is it too late now to say 'sorry,'/ 'Cause I'm missing more than your body," it might not be his ex-girlfriend Selena Gomez.

It's so easy to jump to the conclusion that this tune (which was created in collaboration with EDM artists Skrillex and Blood Diamonds) is about Bieber's rocky relationship with the pop star. (After all, Gomez's "The Heart Wants What It Wants" is pretty clearly about the Biebs.) But, I'm not so sure that this is Bieber's response song, even if the lyrics are an apology.

Instead I'm pretty sure that this song is a letter to Bieber's fans — the same ones that he let down with his bad behavior.

Here are the lyrics that suggest Bieber is looking for redemption:

It's not exactly a secret that the Biebs has been on the road to redemption. At the end of his Comedy Central roast in March, Bieber told the audience that he was ready to start over: “I’ve done a lot of things I’m not proud of," said the Biebs in one of the greatest understatements of the year, "but we’re turning a new leaf here.” It echoed the statement he made on The Ellen DeGeneres Show just one month before the roast, in which he declared that he was striving to be a better person. What better way to solidify redemption than to apologize via song to the public who has supported his music?

At the end of the day, Bieber's "Sorry" might be the best gift he could give his fans, whether the song was an intended message for them or not. Bieber is going back to doing what he does best, which is making music — he may finally be able to get that redemption.