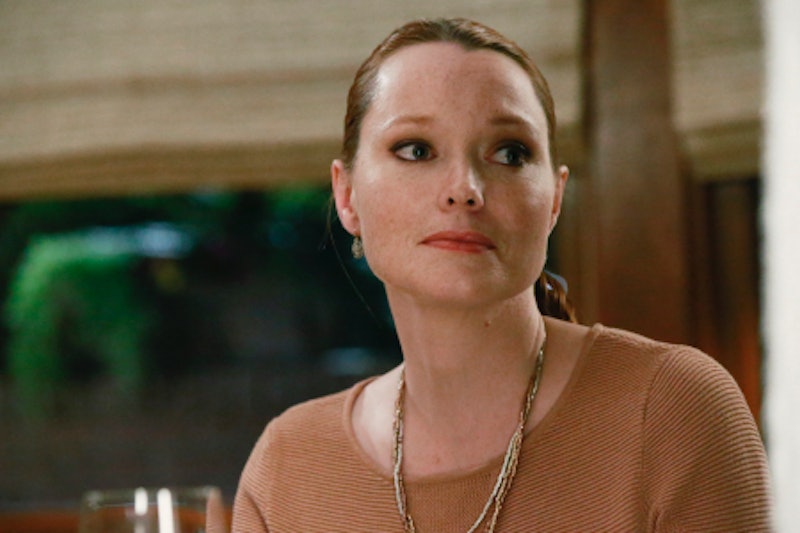 Just when Meredith’s life is starting to settle down, things get upended all over again. Last week, Meredith learned that Penny Blake, the doctor who let Derek die, was coming to her dinner party, and now that dinner party has come to fruition. Poor Meredith, and, really, poor Penny. But watching their messy, messy dinner had me thinking — who plays Penny on Grey’s Anatomy ?

Luckily, I found an answer—Actress Samantha Sloyan has the great misfortune (just kidding) of being in Meredith’s way all season long. If you’re a big fan of Shonda Rhimes and think that Sloyan looks familiar, well, you’re right! Sloyan was on Scandal as Jeannine Locke, the White House staffer paid off to take the fall for having an affair with President Grant so that Olivia would be left alone. Sloyan has also appeared on shows like Parks and Recreation, The Fosters, NCIS, Castle, Criminal Minds, Private Practice (more Shonda!), Rizzoli & Isles, and Hawaii 5-0. A lot of procedurals here. Rhimes must have loved everything that Sloyan did on Scandal and Private Practice, because when Shonda loves you, you get to be on all of her television shows—it’s like an unwritten rule of ABC and TGIT television.

So what can we expect from Penny’s presence at Grey Sloan? Well, a whole lot of angry Meredith and an even angrier Amelia. Neither woman was pleased to have the woman that helped kill Derek around (to say the least), so I’m thinking that Penny’s first few days (or weeks or months or years) at Grey Sloan will be unpleasant at the very slightest. I hope that eventually, Meredith can find the strength to push it all away. Given Amelia’s fragile past, I’m not sure she would be able to, so for now, Penny better just steer clear of Derek’s younger sister.