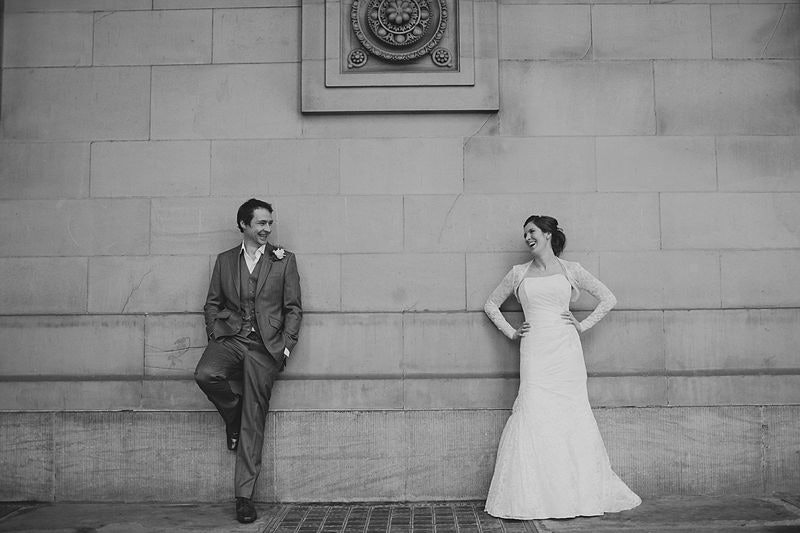 I had conversations about many things with female friends when I got married, but the one issue that really resounded, that was repeated across many different cups of tea, was " Are you going to change your name? " It's kind of a fraught question. One friend, who did take her dude's name when she walked down the aisle (for the very good reason that his name is AMAZING and hers is comparatively a bit so-so), had such a frenzy of feminist guilt about it that she felt hideously defensive about the issue for weeks. We're told taking a partner's name is an act of love, but also that we're independent women who don't need no heterosexual gender norm to keep us controlled. (And that's not even scratching the surface of name-changing in non-hetero marriages.) So what can you do?

The diversity of opinion on this is quite startling, and the idea that refusing a husband or partner's name is the only feminist option is not the truth of the situation. Feminism allows us free choice rather than prescriptive modes of behavior, and despite the misogynist history of name-change, it's still perfectly OK for any woman to do what she damn well wants with her name. It's her name. Let's lay off the judgement on this one, OK?

That said, if you're not into changing your name but still want to do something special, here are six alternatives to the straight-out name change. If you want to do that, I congratulate you and wish you the best of luck with the DMV and passport office. If not, however, here are some choices to dwell upon (at least before you throw them all up in the air and call yourselves Lord and Lady Awesome).

This is what I did. And I have good reasons: One, I'm already known professionally under my maiden name (even though I have not been a "maiden" for a very long time — how stupid is that term?!); two, I like my name; three, you can do a weird trick with my three given names that would be utterly ruined if I adopted my husband's; four, I have a lot of legal and visa documentation under my name, and re-applying would cause a severe crack in my sanity. It just isn't worth it.

The concept of changing names for a woman is, after all, seriously misogynistic in origin. It basically connoted a shift in ownership: from a father's property to a husband's. And I am nobody's. (If anybody tried to ask my husband if he "owned me," I think he'd choke laughing and then lecture them for 45 minutes. He's great.) I'm not even a Mrs.; I'm a Dr., thanks very much, and that suits me just fine.

2. Amalgamate Into A Fun New Combination

The thing about names is that they are, fundamentally, just bunches of symbols and sounds. Can you squish them together in a way that sounds fundamentally better than either one of them on their own? Experiment. Take beginnings, ends, middles, and rearrange. The real thing about names is that they collect their own associations, and combining their vowel-sounds isn't a violation of your ancestry.

The reason I didn't do this with my dude, aside from the above-mentioned reasons that keeping my own name seemed like the best plan at the time, is that our amalgamated names either a) sound stupid (one of the options is Borpe), or b) form the name of a very dodgy street in a town I used to inhabit. Every time I hear it, my first thought is "ah, there's been an arson attack again". Not exactly conducive to marital bliss.

The media has tried to call this a new thing — "meshing" — but it's actually old as the hills, at least for aristocratic families in Europe. When marriages represented the alliance of dynasties, you can be damn sure that both parties kept their original names and simply added them together. Which is why, if you frequent a certain kind of party across Europe, you can run into people with last names like Arbuthnot de Clancy Montagu Fitz-Hatton de Percy. No, really.

It is increasingly common, though. Shoving both of your names together is kind of a great symbol of your future as a combined unit rather than two discrete ones, (though I can predict at least one argument about whose name comes first in the hyphens). Hell, add more! Give your kids a five-hyphen last name and guarantee that they grow up seriously able to hold their own in a fist-fight!

4. Adopt An Entirely New Surname For Both Of You

Hey, if you're going to be going down that route anyway, why not become something different, something unique to your pairing? Mrs. and Mrs. Skyrim; Dr. and Mr. Good Ship Lollipop; the sky's the limit. There's nothing to stop you. I've heard of people picking the last names of favorite literary characters, philosophers they admire, or the street or place where they first met. It's romantic enough to make the paperwork seem worth it.

One partial name-change that's actually common and reasonably traditional — my grandmother, for instance, did this — is to keep your maiden name as your middle name. (Already got one? Who cares? Accumulate five. The more initials the better.) That way you maintain your "old" name as part of your identity as well as your "new one". But there are other ways to do this, too.

Comb through the names of your ancestors together — forenames and surnames — and see if you both want to incorporate one of them into your new name. You might have a particularly inspiring person in your past who can be an important part of your new life together. Or they might just have an awesome name. (I have an ancestor whose name, no sh*t, is Ogle Griselda, and I am not happy that I didn't know this when I got married.)

6. Go For An Auspicious Name

If you're of the persuasion that follows numerology, auspicious numbers, and lucky days, this may be the right choice for you: pick a new surname that's guaranteed to give you luck. (Not for sceptics.) People like Agyness Deyn, the model who changed her name from Laura and promptly became a sensation, believe in this sort of thing as a key to a happy future together.

A note, though: obey the same rule as you would with tattoos. If you don't speak the language or have ancestry in the culture of a name you're thinking of adopting, you're probably going to be stepping on some toes. So, for instance, thinking of changing your name to the Mandarin Chinese for "lucky" (Xing Yun, if you're interested) when you've never done anything more Chinese than eat a spring roll is justifiably going to confuse and piss off some people. Tread with care.