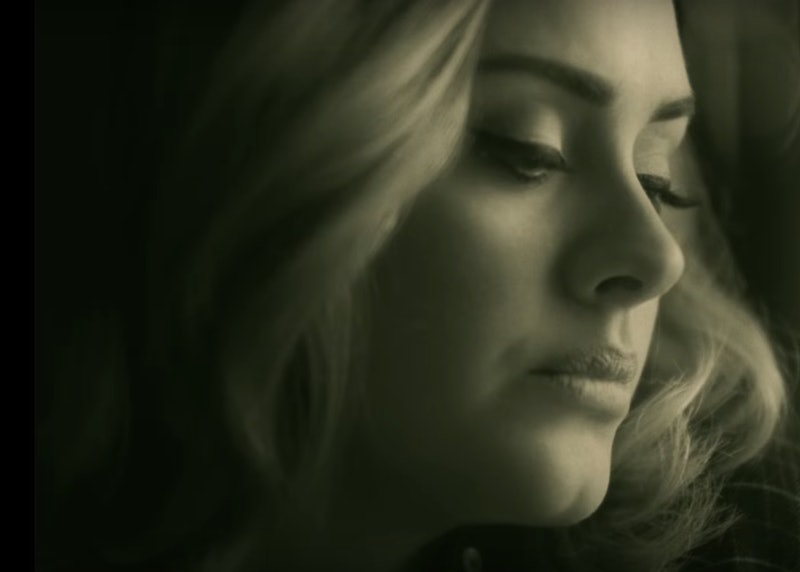 After an extended hiatus from the spotlight, Adele made her triumphant return Friday with "Hello," the lead single from her long-awaited new album, 25 (due out Nov. 20). "Hello, it's me," the now 27-year-old artist sings in the song's opening verse, her voice trembling slightly as she prepares to tip-toe through the wreckage of a now defunct relationship. "I was wondering if after all these years you'd like to meet," she proposes timidly, hopefully. It's clear that she wants nothing more than to reconnect with her ex, to finally reach some sort of resolution. But, despite her best efforts, her calls go unanswered.

Adele is renowned for her heartbreaking ballads, and shortly after the debut of "Hello's" gorgeously shot music video, social media lit up with effusive praise. But "Hello" isn't simply a "Someone Like You" retread (as even I suggested it might be after a short clip of the track surfaced online earlier this week). While listening to "Someone Like You" may inspire ill-advised (not to mention painful) strolls down memory lane past some of our most significant romantic failures, listening to "Hello" forces us to completely reexamine a ritual we've been practicing for almost our entire lives: apologizing.

Hello from the other side

I must've called a thousand times

To tell you I'm sorry for everything that I've done

But when I call, you never seem to be home...

As soon as we're able to speak, we're taught how to apologize. We're given a script: First, state that you're sorry. Next, take responsibility for your actions. And finally, conclude by saying that you hope the other party will accept the extended olive branch (and the other party is generally encouraged to do so). We're told that apologizing is the first step to mending broken fences, and it quickly becomes second nature. But, as we get older, it becomes increasingly apparent that our "apology script" — and really, our entire concept of how apologizing is "supposed" to work — is completely inadequate. It doesn't even begin to take into account the complexity of our emotional conflicts. It doesn't even begin to prepare us for the grim reality that an apology might not be enough.

Hello from the outside

At least I can say that I tried

To tell you I'm sorry for breaking your heart

But it don't matter, it clearly doesn't tear you apart anymore...

Sometimes, an apology — no matter how heartfelt or genuine — can't mend a broken fence. Sometimes, the hurt we've caused embeds itself in a person's flesh like shrapnel, gradually burrowing deeper and deeper until it can no longer be removed. And, because many of us don't want to believe that we're capable of inflicting that kind of lasting, unforgivable pain (everybody deserves a second chance, right?), we may try to assuage our guilt by telling ourselves, "Hey, at least I tried." "Hey, at least I put it out there." It's an often ineffective attempt to shift some of the blame (perhaps unfairly) to "the other side."

"Hello's" profound power lies in its ability to remind us that, occasionally, no matter how much energy we pour into trying to convince someone to hear us out, to accept our apology, it doesn't work. Instead, we must sit with our remorse and our shame and our longing. That, I think, is one of the most difficult — and universal — parts of the human experience: the realization that relationships can remain bruised and blood-stained forever. And still, we have to try to find a way to hang up the phone and move forward.

"Hello" is available on iTunes and Spotify now.