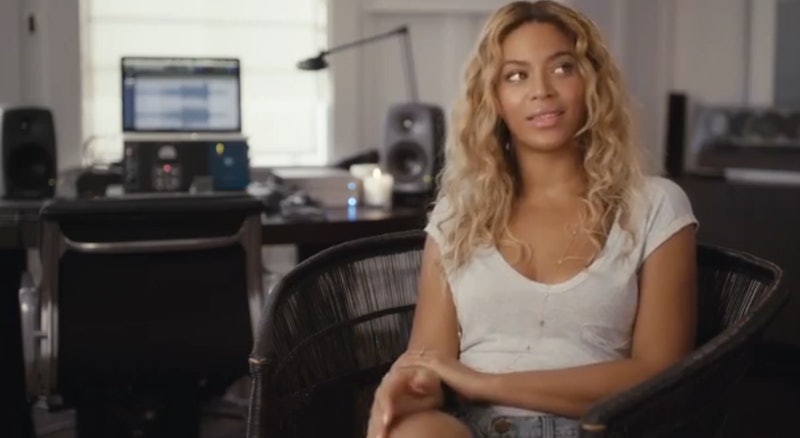 Can you believe we've only lived in a post-Beyoncé world for just over three weeks? Because Queen Bey is loyal to us hungry peons, Beyoncé put out a five-part documentary called "Self-Titled" on her YouTube channel that gives a behind-the-scenes look at her visual album, which dropped (not with a whisper but a bang) on December 13. In the doc's final installment, "Honesty," she talks about starting her career at age nine and how she's grown and evolved into the woman (goddess) she is today. "Now I’m in my 30s, and those children that grew up listening to me have grown up, and I always felt like it was my responsibility to be aware of kids and their parents and all these generations. And I felt like it stifled me. I felt like, in a sense, I could not express everything.”

Where does Bey find the time to make a five-part documentary, you ask? Well, some mysteries are just not meant to be solved. The documentary's parts are titled, in order: "The Visual Album," "Imperfection," "Run 'N Gun," "Liberation," and "Honesty." In part V, Beyoncé begins: "The glue that ties this record together is honesty." For a woman whose feminism has been hashed, chopped, sliced, fried and debated constantly, "Honesty" is a brave move (hell, her whole album was bold and brave). She works HARD, and in this five-minute clip, she shows us, not just tells us. We see her singing "Rocket" in the recording studio and just going off, after which a stunned Justin Timberlake tells her, "There's something wrong with you."

"Honesty" also features Pharrell with some reverent words for Bey: "When does a mother and a wife do that? You just ran through jail and let all the women out. You set women free." He speaks to Beyoncé's complexity: she's not a sex goddess IN SPITE of being a mother, but in conjunction with.

In the music video for "Rocket," the outstandingly sexy track which she co-wrote with Timberlake and Miguel, Bey is flouncing in beautiful lingerie in beautiful black and white and it's just too much. Here's what she has to say about the totally overt, totally amazing sexiness of it all: "You climax and then you have your cigarette."

GOOD GOD, I am so glad I am alive to hear Beyoncé say those words. She finally feels like she had the courage and self-empowerment to make such a sexual album: "I don't think I would have done it back then, I would have been afraid of what other people thought. But I just dropped that fourth wall and I did it."

The best part about Bey for me is her willingness to grow and change and to be vulnerable about it. She has been the subject of so much critique and criticism in 2013 (if you don't remember, she was accused of turning off the Superbowl on behalf of the Illuminati), and yet she constantly bears her soul to her fan with raw candor. She is forthright with the fact that she has struggled with her self-confidence, and it makes her so much more human to us. Beyoncé makes me feel like I can do anything I want and have everything I want. She ends "Honesty" with this: