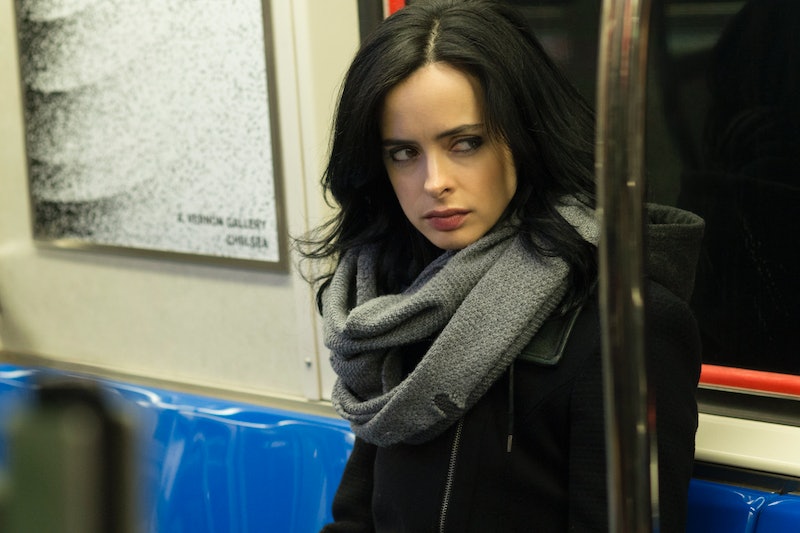 Netflix has been teasing us with snippets from their new comic book series, Marvel's Jessica Jones , for the past couple of months. But Friday, they unleashed a brand new full trailer that gives us an in-depth look at the superhero — or should I say, former superhero? Played by Krysten Ritter, the title character was exposed to radiation and as a result, gained super strength, invulnerability, and the ability to fly (at least, this was origin story was in the comic book — whether or not the show will follow is yet to be seen). After realizing that the superhero life isn't for her, she starts her own private investigation agency, but is still haunted by her past, which includes the mysterious mind-controlling Kilgrave (David Tennant). As Marvel's first female-led superhero project it packs quite a punch — literally and figuratively. The show will hopefully be a start of a new movement in comic book movies and TV shows — because there are tons of female superheroes who deserve their own movie/show.

Jessica Jones sets the bar in what the world needs when it comes to a female superheroes. In under three minutes, the new trailer shows that Jessica is independent, complex, strong, and most of all, badass. All of this is done while wearing regular clothes and not a form-fitting, spandex costume.

Choosing Jessica Jones as their first franchise led by a woman was a smart move on Marvel's part. For one, it was unexpected: Jones isn't the most popular character in their catalog of female characters, so general audiences won't know what to expect. Her mystery will spark curiosity and people won't have any preconceived notions about her. It's a blank slate that Marvel can work with.

There is also something refreshing about a superhero who is over being a superhero. Marvel has all these characters hellbent on saving the world. Jessica just wants to have a normal life — or something close to it. There's a level of humanity to this that adds a new dynamic to the Marvel universe that we haven't seen.

It's great to finally have a superhero project led by a female — and, of course, there is more than enough room for more powerful women on TV and in film. So, in honor of Jessica Jones' impending premiere, here's a list of female superheroes that need their own TV show or movie sooner than later.

We've seen the shape-shifting mutant in so many X-Men movies that she might as well have her own story. Her past has remained mysterious, and her story in the comics has enough material to build a solid movie.

Yes, there was a Halle Berry-fronted version of Catwoman on the big screen — but I think a lot more can be done with this story. Let's give this superhero/villain the movie she deserves!

Since Hugh Jackman is retiring as Wolverine, then they should let the character's kind-of-daughter, X-23 take over the franchise. She has all the qualities of Logan, except she's female. It's a no-brainer to her have her own movie.

Marvel needs a female soldier that is skilled in every kind of fighting and can use every single kind of weapon. Sure, there's Black Widow, but someone like Silver Sable is just too awesome to NOT have a movie or TV series.

It's been long enough. Natasha needs her own movie. Now.

There are plenty more female superheroes who deserve attention, but these should be enough to get Hollywood started.