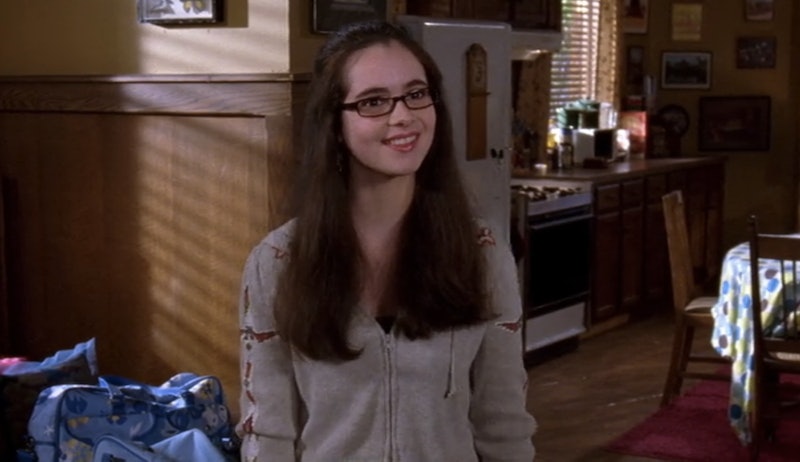 Poor April Nardini. In the timeless and sometimes frustrating love story that is Luke and Lorelai, poor April seemed to bear the brunt of hate from Gilmore Girls superfans, who blamed her for yet another false start in the happily ever after department. In a recent interview with E! News, Vanessa Marano (who played April on the beloved 2000s series), said that she actually shares the upset of all of those furious superfans: "That poor, poor 12-year-old fictional character was hated, which I get. I kind of hated April Nardini, too, as a fan of the show. She broke up Luke and Lorelai!" Oh, Marano, honey. No. April was the best.

Let's just quickly recap for those of you who (unwisely, I might add) haven't spent the past year obsessively re-watching adventure of Rory and Lorelai on Netflix: When April comes on the scene, Luke and Lorelai are due to get married (yay!). Luke finds out that he has a daughter, i.e. April (whoa). The mother of said daughter freaks out when she discovers that April spent one-on-one hangout time with Lorelai and forbids Luke from ever allowing that to happen again (boo!). Lorelai gets mad, Luke gets cold feet, and the wedding (and the relationship!) is straight up shut all the way down (noooooo). It was just about the saddest time to be a Luke and Lorelai fan.

Now, call me crazy here, but it always seemed to me like the main reason for Luke and Lorelai repeatedly not being able to make it work was Luke and Lorelai. Not a little girl who just showed up to meet her dad. Lorelai had a tendency to apply a lot of pressure to Luke — a man who does not deal with pressure, well, at all — to make a decision about their future during a complicated period in Luke's life. Luke just could not deal and bolted. This was never about April. In fact, April was hella cool. So please, put down those pitchforks you've been carrying for her since 2005 and let's talk about this, because all this hatred is all kinds of wrong.

For starters, April was supremely smart, even surpassing town brain Rory Gilmore with her zeal for science — and to this day, April sadly remains a rare 12-year-old girl on TV who possesses the aptitude to dominate a science fair (sidebar: let's fix that, Hollywood). While other kids her own age are making volcanoes out of old toilet rolls, newspapers, and ketchup (don't forget the baking soda, kids!) for their science fair projects, April decided to conduct a full blown DNA test in order to find out who her biological father is. Yeah. Pretty badass.

That girl had some real moxie. And you really have to give props to a kid who doesn't just have a superbly scientific project to present at the fair, but also presents it with some real flair. Just look at those unexpected potential father lineup photos. April was a dark, comic genius, whether she realized it or not. You have to really admire her assertiveness in the whole paternity situation. While her mom, Anna, didn't especially want to know who her father was, April took the initiative to uncovering who it might be all on her own — not to mention the part where she followed it up with some super stealthy scientific detective work in order to find Luke once she figured it out. That's some top-notch sleuthing right there. How could any Gilmore fan not love that?

Then, of course, there were the moments when Luke embraced his unexpected fatherhood and took time to bond with April. She introduced him to the delights of shopping at Target (oh, the treasures!) and the joys of academic field trips (you're never too old to learn). They were even able to re-hash and laugh at Luke's miserable post-Lorelai attempts at dating (one date actually made him eat vegan food, which is like someone trying to slip Lorelai some green tea in place of coffee).

Gilmore Girls truly excelled at showing a strong father-daughter relationship, using April's unexpected appearance on the show to embody the crucial lesson that it's never too late to spend time with your dad, whether you've been close, distant, or strangers your entire life. Sometimes, those sorts of bonds are worth putting part of your life on hold for — even if it upset a ton of Gilmore Girls fans.

So, please, let's rethink this grudge that you may or may not hold towards this 12-year-old fictional character. Because encountering an amazingly smart, driven, analytic, and ambitious pre-teen girl on television is something to be celebrated, and something that's certainly worth more than a few broken shippers' hearts.