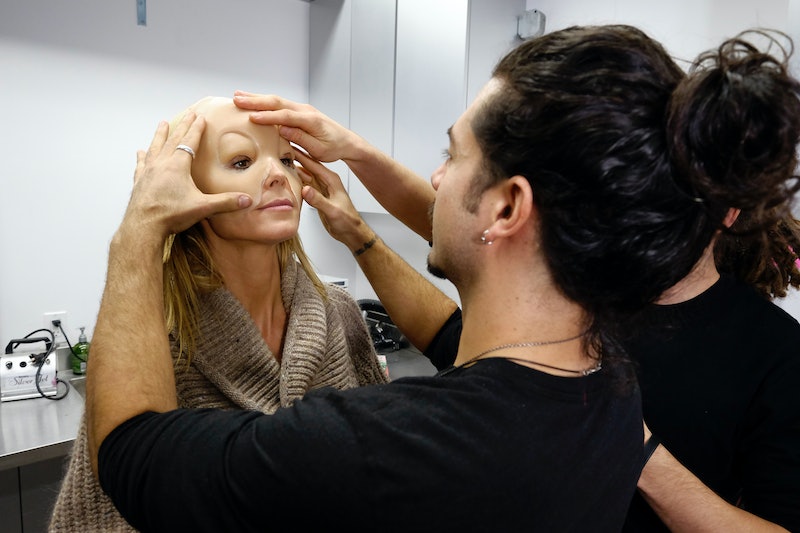 In the last several years, before I could even figure out what I'm going to dress up as for Halloween, I often try and guess what Heidi Klum's Halloween costume is going to be. Every year. With the haunted holiday fast approaching, the undisputed queen of Halloween is finally giving more details about her 2015 costume. Klum teased her costume on Instagram a few weeks ago, but now she has finally dropped more hints about what she will be wearing to her annual Halloween party.

“This year’s costume is sort of a male’s fantasy," Klum said. "That’s all I’m going to say!” The supermodel and TV host shared photos from her Halloween costume fitting. From the looks of it, Klum's costume will be constructed from prosthetic parts that were initially molded to her body and then pieced together to form quite a buxom figure. On top of that, she will be wearing a sequined gold dress (or some type of clothing) that was designed by Project Runway winner Christian Siriano.

“He’s designed amazing red carpet looks for me over the years, even for the Emmys," Klum said. " When I came up with this year’s costume, I knew Christian would help make it extra fierce.”

A team of prosthetic experts covered Klum's body in latex in order to create the pieces that will form her new, curvy figure.

And then there's this headpiece that will make Klum unrecognizable once she finally reveals her Halloween costume.

So, what will Heidi Klum dress up as this year? People suggested a "Break the Internet" situation going on with the second photo above, so perhaps the costume is an ode to Kim Kardashian's Paper magazine shoot? My guess is that the supermodel's costume will be more obscure and thought-provoking than simply impersonating Kim K., but hey, it's not like she would be the first celebrity to dress up like another celeb for Halloween.

The socialite paid tribute to Cyrus' VMAs moment with this Halloween ensemble.

The TV host often loves to dress up as her guests, but this Minaj costume truly takes the cake.

The actress was living her own Teenage Dream in this pop star getup.

This Twins send-up is further proof that Richie is the coolest person on the planet.

One queen impersonating another. Plus, Blue Ivy as the King of Pop is everything.

More like this
12 New Year's Nail Ideas That Are Truly Stunning
By Jordan Murray
Here Are All 703 Outfits Rachel Wore On Friends
By Kat George
Cyber Monday Deals 2022: The Best Fashion Sales To Shop
By Dominique Norman
The Best Black Friday 2022 Fashion Deals To Shop This Year
By Dominique Norman
Get Even More From Bustle — Sign Up For The Newsletter