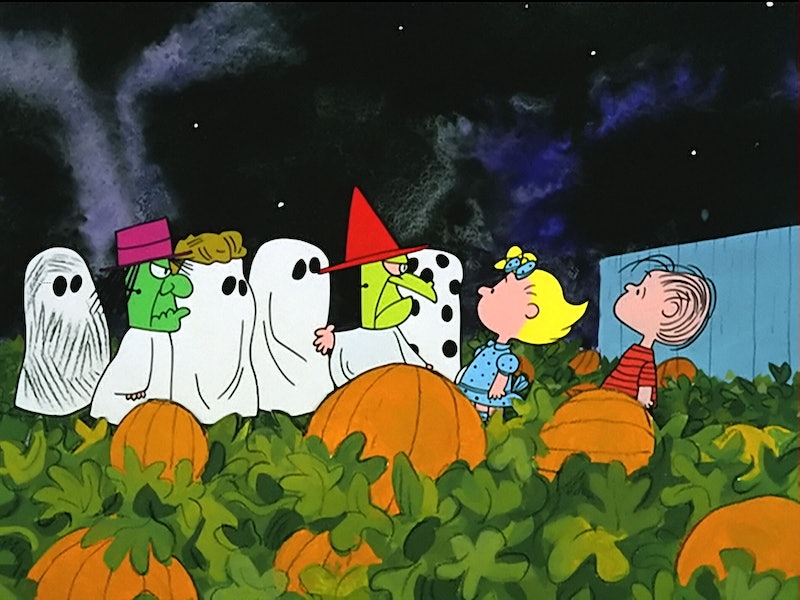 Halloween is coming, and that can only mean one thing — no, I am not talking about Pumpkin Spice Lattes (even though those are delicious). The impending return of All Hallow's Eve means it is time for the annual viewing of the fall classic It's the Great Pumpkin, Charlie Brown! My most recent re-watching of the Halloween-set Charlie Brown flick has put the film in a totally new light. It turns out that It's the Great Pumpkin, Charlie Brown is weird, and not at all how I remember it as a child.

And I watched It's the Great Pumpkin, Charlie Brown a lot growing up (I think we all did). The Charlie Brown special is as integral to Halloween celebrations as pumpkin carving and candy corn. Even if you aren't a Charlie Brown fan, you watch it because it's tradition, and traditions have to be upheld or the world will plunge into chaos (or at least that is what my mother says when she forces me to pose for the annual family Christmas card). If my mom says it, then it must be true — so everyone must watch It's the Great Pumpkin, Charlie Brown this fall, or else the ties of society will surely crumble.

Here are the weirdest things I noticed while re-watching It's the Great Pumpkin, Charlie Brown.

1. The Film Is Surprisingly Short

As a child, I squarely believed that It's the Great Pumpkin, Charlie Brown was a feature-length film. Watching it as an adult makes me realize that I was totally mistaken. The Charlie Brown Halloween special is only a svelte 25 minutes long.

2. Linus And Lucy Stole That Pumpkin

In the opening sequence, Linus and Lucy travel to the pumpkin patch to select a pumpkin. And then without asking anyone or paying for it, they leave. They totally stole that pumpkin! I feel that not enough people have acknowledged that two of the Peanuts characters are thieves.

This stunt is totally dangerous. Why is Charles M. Schulz trying to teach the children of America that rolling down a cement path on a pumpkin is a good idea? It is a horrible idea. Also this scene makes no sense. It's like Schulz was trying to fill our pre-teen minds with lies.

How did this scene make it into a children's program? This looks like Charlie Brown and the Really Bad Acid Trip.

Lucy went out of her way to put paper around her pumpkin carving work space and then she totally disregards aforementioned paper and puts the pumpkin mush directly on the carpet. What is wrong with this girl?

I remember that as a child I identified greatly with the Linus van Pelt character. He enjoys blankets and sucking his thumb — how could you not love the kid? I now can say with full confidence that Linus is a utter weirdo. His fervent belief in the Great Pumpkin is unhealthy and strange. Linus seems like the type of kid who would go into a four-hour discussion about Doctor Who or collects stamps. As an adult, those are the kinds of people I try to avoid.

OK, I'll buy that Snoopy can fly and go on adventures because he is Snoopy and he's awesome, but I draw the line at believing Snoopy can read. Nope, not happening. Even in cartoon form, dogs can't read. Sorry, not sorry.

8. Lucy Is In Desperate Need Of Therapy

Lucy has a lot of anger pent up within her tiny body. A child showing such violent behavior (like threatening bodily harm to her younger sibling or stabbing inanimate objects) at such a young age is concerning, and Lucy's parents should really consider some counseling.

9. This Is Not How Physics Works

10. Who Gives This Much Candy?

No child receives this much candy from one house at Halloween. This is just total craziness.

Charlie Brown does not receive just one rock, but several. So either Charlie Brown is the town menace whom no one likes, or the parents of the town are going out of their way to bully a small child. When I was younger, I always thought the rock was a strange plot point. As an adult, I view it as borderline child abuse.

Linus is a weird kid — that has already been established (see No. 6). But did you also know that Linus says some pretty sexist things? It took only one quick re-watch to realize something was amiss with everyone's favorite blanket aficionado. When Linus is explaining the myth of the Great Pumpkin to Sally, he says,

Sally was just trying to get some alone time with Linus till big mouth Lucy came in and ruined things. If Lucy isn't getting any, no one is getting any.

14. Snoopy Totes Has A Crush On Lucy

Snoopy seems to be having some inter-species romantic feelings for Lucy. That is the only way to explain this sequence.

15. Snoopy Has An Orange House

Apparently I never noticed that Snoopy's usually red dog house is orange for the Charlie Brown Halloween special. I have literally no clue how I never saw this before. That is sorta embarrassing on my part.

16. This Sally Chick Has Got To Chill

I get it Sally, you really like Linus. But I think you need to chill. Now.

We have all had this fight with our S.O. at a bar, hand on our hips, flipping the freak out. Don't worry Sally, we all understand — Linus is the worst.

18. The Peanut Parents Are The Worst

What is it with the parents in Charlie Brown? First, they give out rocks for Halloween and then, they let small children stay out at all hours of the night. Lucy is literally the only person who notices that Linus is not in his bed at 4 a.m. That's some real bad parenting.

19. There Are Strange Music Choices

When Lucy goes to find a shivering Linus in the pumpkin patch, aka "the most traumatizing and pathetic moment in Linus's young life," the scene is accompanied by the upbeat "Linus and Lucy" theme. Seems like an odd musical choice for this sad, sad scene.

20. Lucy Is A Better Person Than Me

When Lucy helps Linus into bed, she kindly takes his shoes and socks off. When I deal with a semi-coherent person, they are on their own. They are going into bed with their coat, shoes, and socks on. That might sound harsh, but hey, that's life.

21. Linus Is That Friend

You know which friend I'm talking about. The one who makes all those dumb drunken mistakes and when you are like, "No worries. It's okay, we all make mistakes," they explode at you like an atomic bomb saying they didn't do anything stupid. Yeah, that's Linus. Linus sucks.