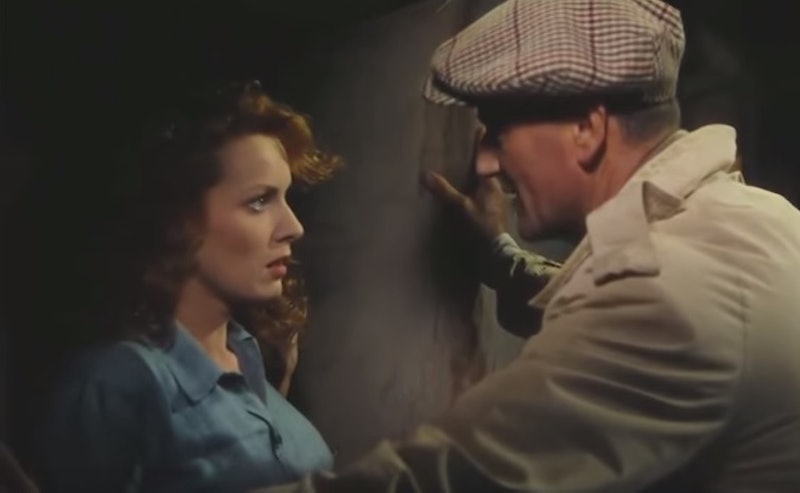 Hollywood lost one of its last remaining Golden Age actresses on Saturday, October 24, when Maureen O'Hara passed away in her sleep at the age of 95. Her career spanning decades, O'Hara always seemed to take on characters who knew their own minds, and lived their lives on their own terms. From her role as working single mother Doris Walker in 1947's Miracle on 34th Street to her role as Esmeralda in 1939's The Hunchback of Notre Dame, O'Hara's characters were fighters — but no character O'Hara played ever had more fight in her than The Quiet Man 's Mary Kate Danaher. The romantic movie boasted comedy, drama, and O'Hara proving she was a force to be reckoned with onscreen.

Set in Ireland, the movie is a certified classic, and the lion's share of the credit is owed to O'Hara. In the Quiet Man, Mary Kate finds herself being used as a bargaining chip by her brother. She falls for the rakish ex-boxer and American Sean (Wayne), who comes to Ireland to reclaim his family's farm. Her brother wanted the land himself, and when he doesn't get what he wants, he refuses to consent to Mary Kate's marriage to Sean or to release Mary Kate's dowry. It's the last part that leaves Mary Kate blistering with rage. Her dowry is her independence, her freedom, and her birthright. It should be hers to do with as she wishes and when Sean won't help her fight for it, hell hath seen no fury like Mary Kate.

It is a scene earlier in the film that is O'Hara's most iconic though. A majestic kiss scene between two of Hollywood's icons is not just the most memorable moment, but the one that is impossible to forget thanks to the passion O'Hara infuses into Mary Kate's actions. To fully appreciate the scene, you must put yourself into a '50s state of mind: Mary Kate enters Sean's house unaccompanied (a huge taboo for an unmarried woman at the time) with the intent to clean it — but it is obvious she's curious about this attractive American.

There is a moment when Sean realizes Mary Kate is in the house that she attempts to flee out into the raging winds. The cinematography only adds to the emotional rawness of the scene as Mary Kate's red hair ripples in the wind and Sean snatches her arm and pulls her to him. It's a typical move from the '50s era idea of the perfect, bold American man that was Wayne, but it is Mary Kate's response to his actions that makes this scene a classic. He pulls her in and kisses her, and then she throws a solid slap his way. It doesn't land, but with her temper flaring and indignation written all over her face, O'Hara's talent is breathtaking.

The mood in the scene shifts again as the two talk, and O'Hara's face begins to soften. Even as Sean frames Mary Kate's body against the door, she regains control of the situation. She is not a woman who is content to have her kisses stolen, even from a man she is falling in love with, and so the scene ends with her stealing a kiss of her own. The entire scene establishes Mary Kate's fierce personality and her desire to be seen as Sean's partner, not his subordinate.

Even if you have never watched The Quiet Man, you have surely seen the kiss. It is paid homage to in E.T. the Extraterrestrial, and it is a favorite among cinephiles with a romantic streak. One scene cannot fully define a career or fully explain O'Hara's contributions to film, but this gorgeous and powerful moment gives you a taste of what O'Hara could do.

According to a statement from her family, O'Hara was listening to the music from The Quiet Man when she passed away. They said it was her favorite film, and is it any wonder? In Mary Kate, O'Hara was allowed to be expressive, angry, forlorn, proud, and in love to the point where her heart ached. Even though O'Hara has passed on, her work will remain. The Quiet Man, Mary Kate, and O'Hara will all endure as pinnacles of the greatness Hollywood can achieve when they let women be so very alive.

More like this
Courteney Cox Recreated An Iconic 'Friends' Scene To Surprise Fans
By El Hunt
Yes, That's Lindsay Lohan's Sister Singing In The 'Falling For Christmas' Movie
By Radhika Menon
Keke Palmer Paid Tribute To "Other Half" Darius Daulton After Announcing Pregnancy
By Jake Viswanath
'The Holiday' Director Just Addressed *Those* Sequel Rumours
By Sam Ramsden
Get Even More From Bustle — Sign Up For The Newsletter