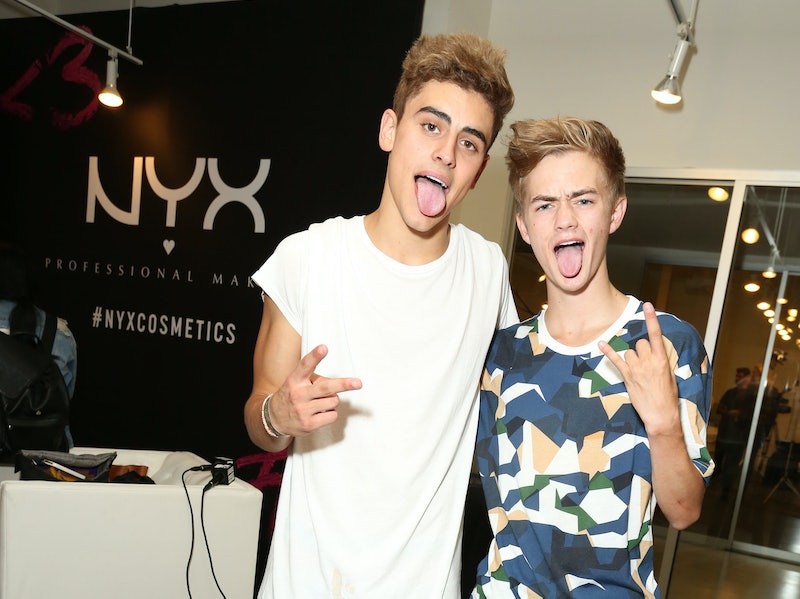 Women aren't the only ones who see makeup as a tool for self expression. Despite popular belief, men wearing makeup is a thing too — and it's a thing that helps gender become a more fluid concept. According to Mashable, "It happened with fashion and now it's filtering into beauty: Gender lines matter less than ever before, if they even exist at all. More men are starting to embrace makeup and are finally being accepted for doing so."

Mashable reporters Marilyn La Jeunesse and Hayley Wilbur noted that this practice became especially apparent at this year's Beautycon, a beauty expo in New York City held on Oct. 17 where experts, professionals, and makeup lovers united underneath one roof to talk beauty. Although still a predomimently female-dominated event, this year saw a noticeable increase in male attendance.

When asked about the new male interest in beauty products, Beautycon CEO Moj Mahdara told Mashable, "I think this audience is really allergic to categories. They’re allergic to the sort of heteronormative classifications of male and female. I think the reason that you’re starting to see classically male audiences come into Beautycon is because people really want a place where they can express themselves. People want to redefine what beauty is."

It would seem, then, that men and masculine-presenting individuals are starting to break out of the rigid, tough-guy tropes established by the mainstream and exploring their more creative sides with the help of eyeshadow and fake eyelashes.

One of the Beautycon goers was Broadway actor and fellow makeup wearer Frankie Grande. When Mashable asked why he enjoys makeup, he explained, “First of all, it’s 2015, so don’t be scared of anything, because it doesn’t matter what anybody thinks about you at all. It’s about what makes you feel good. For me, [makeup] made me feel more confident. So, I think if that’s what your body is asking and your mind is wanting and your heart is craving, you should definitely go for it.”

Finding power in a concealer brush has nothing to do with being a boy, a girl, or anything in between, and it's incredibly refreshing that non-female identities are beginning to accept and put into practice that idea.

It seems like 2015 has been a big year for blurring gender lines, so here are three other times during which the hard line between male and female softened just a little bit, and created amazing results.

With new creative director Alessandro Michele taking over Gucci in Jan. 2015, there's come a new way of thinking about what constitutes "men" and "women's" clothes. Blending the gender specific silhouettes and fabrics, Michele sent men down the runway in a line that has a traditionally female edge but is meant to be hanging in a male's closet.

Selfridges, a major British department store, created the Agender pop up shop in 2015 meant to challenge not only what clothes we think are gender appropriate, but how we shop in general. According to Racked, "The idea behind Agender is less that the clothing itself is androgynous, but rather that the pop-up takes on a neutral approach to traditional department store merchandising: Clothes from both the men’s and women’s seasonal buys are being sold alongside one another without traditional gender cues."

Many women don't think twice about crossing over into the male section of a store and picking out pieces, and thankfully men are beginning to feel the same about the women's section.

These days, even underwear can be gender-less. Enter Acne's new underwear line: One that includes cuts like boxers, briefs, high waist briefs, and shorts without gender specification. When you think about it, why should women be the only ones who get to dabble with body-hugging pieces? I say, if a man or non-binary individual has a yen to wear low-rise panties, they should go for it.

A more gender-less sartorial world is undoubtedly something that could help thousands of people. Here's hoping efforts like these help us get there.

More like this
Berriez Founder Emma Zack On Her Size Inclusive NYFW Show
By Dominique Norman
Confused About Blush Placement? This TikTok Makeup Hack Will Help
By Olivia Rose Ferreiro
The Best Plus-Size Looks From New York Fashion Week
By Dominique Norman
The 12 Best Strapless Bras That Won’t Slip & Fall Down
By Audrey Williams and BDG Commerce
Get Even More From Bustle — Sign Up For The Newsletter