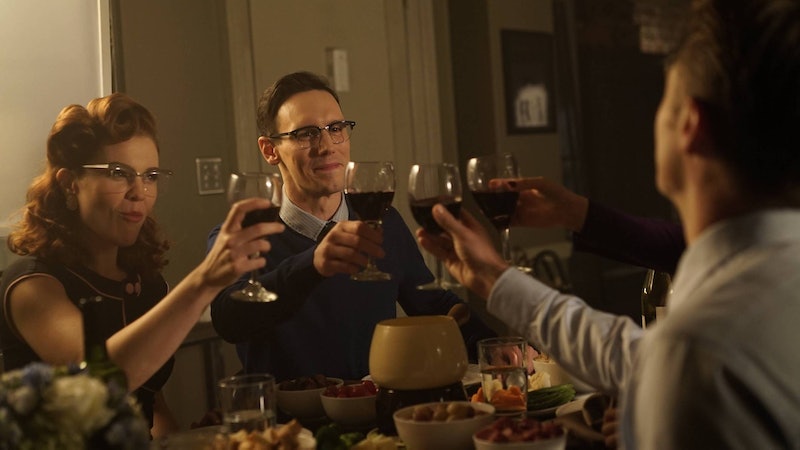 Edward Nygma can't be the easiest guy to get along with. He's a budding supervillain, after all, and his obsession with riddles is pretty annoying. But in the last few episodes of Gotham Season 2, Ed Nygma and Kristen Kringle have become a surprisingly good couple. These two might actually be the closest thing they have to soulmates. But honestly, there are not a lot of good options in Gotham City, romantically speaking.

Probably the most successful couple on the show is Jim Gordon and Lee Thompkins, and one or both of them almost dies in every single episode. Next best is probably the Theo Galavan/Barbara Kean/Tabitha Galavan triad, and the siblings each seem to have their romantic feelings for Barbara fueling their evil plans to take over the city. I suppose Harvey's relationship with his girlfriend is vaguely functional, but it was implied that she seriously disapproved of his career as a detective and since he returned to the GCPD, there might be some strain there. And the only other romance of note on the show is Bruce Wayne's flirtations with Selina Kyle and Silver St. Cloud, and he's only 12 or so years old. Point being: Ed and Kristen don't seem so bad compared to some of these couples. Here's what makes them a 'ship worth rooting for on Gotham.

Ed is very smart and driven, the polar opposite of the guys that Kristen used to date, like Tom Dougherty. And even more importantly, he respects the fact that Kristen is intelligent too.

He's attentive, caring, and, while a little obsessive, pays attention to Kristen rather than totally ignoring her like we've seen some GCPD officers do. While it's emotionally unhealthy to idolize the person you're dating, Ed does seem interested in her point of view, and backed off after she asked him to respect her boundaries in Season 1. Hopefully now that he's getting to know the real Kristen, Ed's idolization of her will wear off in favor of a more reciprocal relationship.

Both Edward and Kristen have quick wits and are able to joke with one another. Even though Kristen was initially creeped out by Ed's riddles, she's the only person who's able to figure out the answers to them and doesn't seem to mind anymore.

4. They Seem To Be Attracted To One Another

These two actually had a surprising amount of chemistry when Ed invited Kristen over for a date. They even ended the night with a kiss. So the relationship isn't all one-sided — Kristen has expressed that she's interested. Looking good for these two to stay together!

5. So Far, It Seems Like Kristen Isn't Repelled By Ed's Darker Side

In fact, a few times its seemed like Kristen is actually deeply interested in finding out more about Ed, and that includes his fragmenting psyche. Remember, she recently told Ed that she empathized with his negative "voice."

6. They Managed To Make A Double Date Not Seem Weird

And they ate fondue with Dr. Lee. Honestly, in "Scarification" Ed and Kristen came across more like an old married couple than they did a couple of coworkers who have been on one date.

7. They Survived The Maniax Massacre Together

Ed saved Kristen that tragic day, and though she does not owe him anything for that, sometimes traumatic events can trigger feelings between people. And since then, Ed finally gained the confidence to ask Kristen out directly rather than using riddles to deflect his feelings.

The Problem: He Killed For Her

In an awkward moment during their date, Ed said something about Tom being dead, when Kristen and everyone else believes he left town, and it nearly derailed everything. So even though this Gotham relationship may be great for now, Ed Nygma and Kristen Kringle have some big secrets between them that could ruin their romance before it really begins.