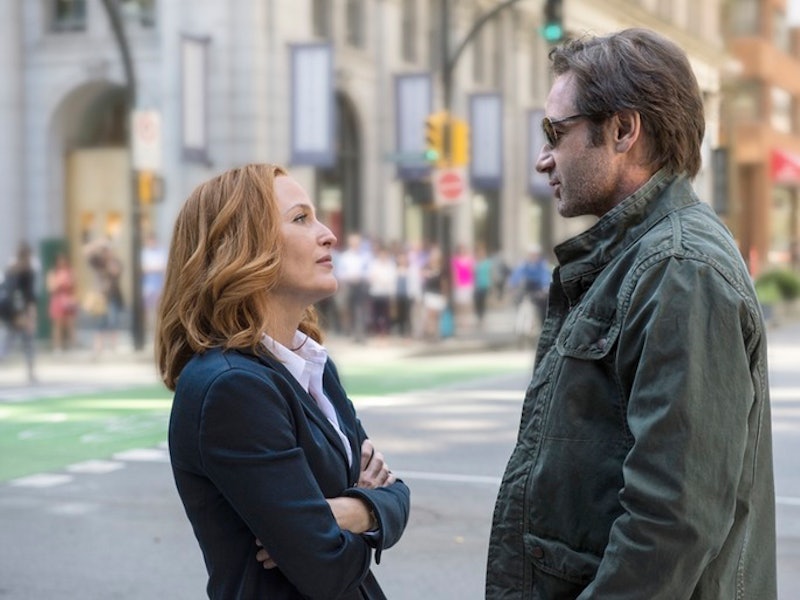 By now, I think we fans have all had enough time to come to terms with the fact that when The X-Files kicks off again in January, Mulder and Scully will no longer be together. That doesn't mean we're happy about it or accept it as a good idea in any way, but Chris Carter is has never been kind to the 'shippers, so the decision to break up the universe's OTP doesn't particularly come as a surprise. It's clear that the X-Files reboot won't be the show we all knew and loved (at least for the first seven-ish seasons), but will it even be worth watching with the leads completely at odds? Likely not, which is why it's good to know that Carter has promised to reunite Mulder and Scully, albeit only professionally.

At Entertainment Weekly's EW Fest on Saturday, Carter joined executive producer Glen Morgan and writer/producer Darin Morgan to answer some of the big questions about the new X-Files and what we can expect once it premieres. The one main thing on everyone's minds was of course what will happen with Mulder and Scully and how the show can really be any good if they're not together anymore. After all, we had to have the patience of saints during the series' original run to see that unresolved sexual tension be... well, resolved. But Carter wants us to know that Mulder and Scully will get back together, just for work rather than romance.

"We’re dealing with two people who had a romantic relationship. They’re no longer together for reasons that we come to understand over the course of the pilot — it’s mentioned — and we see the reigniting of some old passions that each of them have. And they find a reason to come back together, not romantically, but for other reasons."

Ugh, boring. To build this incredible, unbreakable bond between two characters, only to rip it away from fans seems pointless and like a disservice to the years Mulder and Scully spent together and everything they went through. That's not to say that a couple that goes through intense experiences together is bound together permanently, but when it comes to these two, it's not even in the realm of possibility that they would end their relationship willingly and in any circumstances other than one of them dying. After all, you don't survive abductions, alien pregnancies, government conspiracies, and several near-death experiences only to break up over, what, Mulder leaving his towels on the floor one too many times?

One thing to keep in mind is that Carter isn't going to come out and tell us the end game plan here, and Mulder and Scully may very well end up back together (and will, if anyone working for the show has any common sense). However, the showrunner hinted that it was the Fox network behind the decision to keep the characters apart, as they believed there was "not enough sexual tension" in the pilot episode. Uh, hate to break it to the yahoos at the network, but we had seven years of sexual tension. We've earned a proper relationship between them now.

Whatever happens, Carter has six episodes to get it right. Here's hoping he doesn't seriously disappoint us.