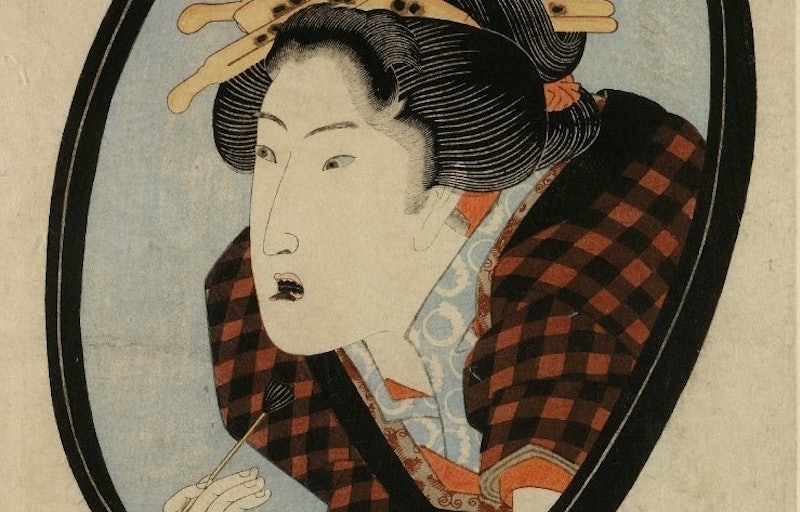 There are definitely some peculiar beauty trends out there in 2015, such as "tattooths" and "toe-besity surgery," arguably stemming from the era's obsession with body modifications and losing weight. By revealing what the people of their time found aesthetically and socially valuable, weird beauty trends throughout history help us better understand changing social climates. But they're also just plain fun to learn about, and often inducing of a chuckle or two.

Imagining women covering their teeth in black lacquer (like the Japanese circa the Meiji Era) or plucking out every last eyelash and brow hair to accentuate the forehead (I guess the ladies of the Middle Ages hadn't heard of contouring), shows just how constantly-evolving the world of beauty actually is. One day, I'm sure my penchant towards winged eyeliner and a bold purple lip will be viewed as strange and archaic as well.

Of course, it's arguably important to embrace beauty as an act of body positivity, creativity, and agency. But these extreme techniques remind us that the history of the beauty routine is pretty sexist and body negative.

Check out some of these weird beauty trends throughout history. Some are pretty rad, while others are just out of this world bizarre.

1. Unibrows Made Of Goat's Hair

As we all know, the beautiful Frida Kahlo rocked the hell out of her unibrow. However, it was a popular beauty trend long before her existence. According to the New York Times, the ancient Greeks valued the beauty of a unibrow as it became known to signify intelligence and beauty in women. Women who didn't have unibrows would even connect their brows with kohl or dark powder. According to Mental Floss, some actually fashioned false brows out of goat's hair and tree resin!

During pre-revolution era France, pale skin was all the rage thanks to trendsetters like Marie Antoinette. With pale skin, however, often come more noticeable veins (something feminine people of today's society don't necessarily appreciate), and they were coveted just as much by women of this time. So much so that they would often color in their veins with blue pencil to highlight their vascular features, according to BuzzFeed.

3. Removing Eyelashes In The Middle Ages

Today, many of us do whatever we can to have the fullest and longest set of lashes around, whether that be using mascara that promises volume or conditioning treatments for growth and enhancement. However, it hasn't always been this way. During the Middle Ages, the forehead was considered the sexiest part of a woman's face. According to Marie Claire, women often removed most or all of their eyelashes (and eyebrows as well!) to accentuate this part of their faces. This is one wild look that I don't think I would ever have the strength to get behind honestly.

4. DIY Blush In The Victorian Era

England in the Victorian era did not see very much makeup thanks to the Queen, who condemned it as a practice limited to actors and prostitutes. To make up for the lack of rogue, women of this time had to get super DIY. According to Into The Gloss, they would privately bite their lips and pinch their cheeks to create a rosy glow on the face and mouth before meeting suitors. Based on my (albeit brief) attempts at this look, the ladies must have been biting and pinching pretty damn hard and for longer periods of time to achieve it. Beauty is pain, I guess.

In a world where white teeth are embraced and every other toothpaste on the market seems to have some kind of whitening agent inside it, it's interesting to consider the Japanese beauty trend Ohaguro, popular in the Meiji era. Ohaguro refers to black lacquered teeth, which can be achieved by drinking "an iron-based black dye tempered with cinnamon and other aromatic spices," according to popular blog Stuff Mom Never Told You. This practice was banned in the 1870s when the empress of Japan daringly rocked white teeth as a move toward modernization. Fun facts: Blackened teeth held up better than untreated ones (rad!), and the darkened smiles symbolized women's submission to men (gross).

Humans of the 18th century (as well as centuries before then) were huge fans of a pale face. However, the way in which they achieved it was pretty sketchy. Using a mixture involving white lead and vinegar, people would powder their faces as makeup and as a whitening agent. According to NBC News, the white lead would also even out the skin and erase freckles. Sometimes, they'd top it off with a bit of red lead for a rosy glow.

However, this heavy duty stuff was not made for faces, and would eventually break down the skin and cause scarring as well as illness. At least they looked just the perfect amount of ghostly, I suppose, considering this look could come with deadly consequences.

7. A Perfect Complexion Thanks To Arsenic

Once using lead for the complexion came to an end, eating arsenic for the purpose of beauty became all the rage (I guess that seemed safer?). This product, which we know to be deadly, also helps in evening out complexion and whitening the skin. According to New York Magazine, "They could also make you go bald. To add insult to injury, if you stopped taking them abruptly, it would cause your complexion to go haywire, thus incentivizing you to keep taking them." Sears even sold Arsenic Wafers in 1902, according to Mental Floss.