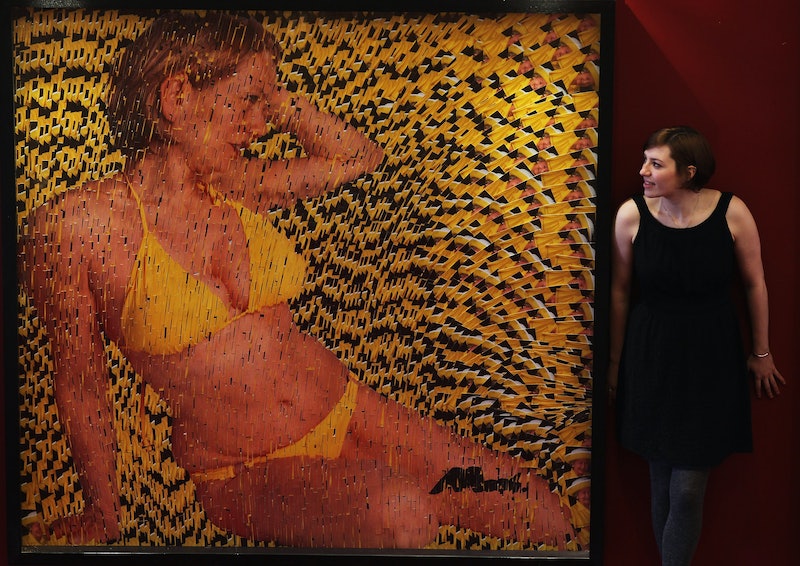 If you think the U.S. is the only country that demands that women sacrifice their wallets and test their personal pain thresholds in the name of vulva beauty, think again: Some women in Korea have recently begun undergoing pubic hair transplant surgery, a procedure that is intended to add extra hair to the pubic area, and will set you back a few hours and around $2000. In Korea, pubic hair is considered a sign of fertility and sexual health — which might sound like a beautiful dream to anyone who's spent roughly 100,000 hours of their adult life trying to wrangle their unruly pubes into an "acceptable" form. But while it might sound liberating, it appears this emphasis on an unnaturally fuller bush is just another pubic beauty standard for women to feel bad about not conforming to.

But this past year, New York Times trend pieces and American Apparel window displays alike declared that the bush was back. While this whipsaw between extremes seems unprecedented — how can we go from no pubes to full pubes in three years? — the fact is that pubic hair trends have changed wildly from era to era, throughout recorded history. Which culture was the first to go fully bare? When did they invent the pubic hair wig? Find out as we explore our pubes, and ourselves.

ANCIENT EGYPTIANS, ROMANS, AND GREEKS: TAKE IT ALL OFF!

As much as folks like to blame our modern hairless vag frenzy on Sarah Jessica Parker and company, our forebears were also interested in a smooth pudenda. The Egyptians removed pubic hair, as well as almost all of the other hair on their bodies, with sharp flints, pumice stones, or via a proto-waxing process, as did some women from other Middle Eastern cultures; and some women in ancient Turkey used early hair depilatory creams.

The Greeks were not quite so lucky: they removed pubic hair by plucking out individual hairs until the whole area was deforested, or sometimes even by burning off pubic hair. The ancient Greeks thought pubic hair on women was "uncivilized," though there is some debate about whether average women went hairless, or just courtesans. Upper class women of ancient Rome also kept their bonnets smooth, and some men removed their body hair, as well — though they were thought to be "dandies" because of it.

EUROPEANS OF THE MIDDLE AGES AND ELIZABETHAN ERA: LEAVE IT ON! (MOSTLY)

Queen Elizabeth I set further body hair removal trends by keeping her pubic hair, but removing her eyebrow hair, which proved that women have always lived under pressure to keep up with bizarre, borderline nonsensical body fashion trends. Bush hair removal stayed off the table in the Western world for the next few centuries (though most sculptures and paintings of female nudes remained curiously bush-free).

THE FIRST HALF OF THE TWENTIETH CENTURY: SHAVE SOMETHING, BUT PROBABLY NOT YOUR BUSH

The first women's body hair razor was released by Gillette in 1915, though ads focused on armpit hair. Nylon shortages during World War II encouraged women to go bare-legged, which led to greater proliferation of leg shaving; and thus, when the bikini was first released in 1946, the stage was finally set for American women to "clean things up" down yonder with a razor.

Though no advertising campaigns ever came out and declared that pubic hair shaving was now considered necessary for American women, the thought seemed to be swirling in the background of many of them — like an ad campaign by razor manufacturers Wilkinson Sword that seized upon the early 20th century cultural mania for pseudoscience, and declared female underarm hair "unhygienic and unfeminine." And though it's difficult to indicate exactly when the practice became mainstreamed or how it was publicized, look at this photo from 1946, which features a woman modeling one of the first bikinis — odds are, she wasn't born with the Barbie doll pubic area you see before you:

THE SIXTIES AND SEVENTIES: OOOH BABY BABY, IT'S A WILD BUSH

The sixties and seventies tied ideas about sexual liberation to natural and freely grown body hair, making a full bush and lush armpit hair a sexy symbol of the counterculture — and making the term "seventies bush" synonymous with going totally au naturale in the underpantualr region. Yeah, some people kept shaving and trimming throughout this era, but what a bunch of squares, am I right?

THE EIGHTIES, NINETIES, AND OUGHTS: Bushes For President, Not Women

In the '80s and '90s, trimmed pubes proliferated. There was even a section in the 1996 play The Vagina Monologues about how going full-hairless was creepy and degrading — which seemed, at the time, a pretty common thought. A quick glimpse at the era's nude art photography by Helmut Newton— or a flip through a less highbrow publication, like Playboy — revealed that manicured but very present pubic hair on women was considered sexy and desirable.

But in the very late '90s, Brazilians became a celebrity trend. Though the completely bare Brazilian wax was brought stateside by the J. Sister Salon in 1987, it didn't enter the cultural consciousness until 1999, when stars like Gwyneth Paltrow began claiming that the look was life-changing.

And when the infamous "Brazilian" episode of Sex and the City premiered on September 17, 2000, the style transformed from another kooky celebrity trend into a full-fledged national obsession. Every salon in the country seemed to suddenly offer the once-obscure procedure.

There aren't any clear statistics about how many women decided to pave their paradise and put up a parking lot in the early 2000s, but the look became, at the very least, culturally omnipresent. The enthusiasm for Brazilians seemed tied to a rise in the popularity of cunnilingus, as well. And the craze made the Brazilian a standard part of many women's beauty routines — the look became so ubiquitous, doctors confirmed that it caused pubic lice to nearly become extinct by 2013. In 2009, razor manufacturer Wilkinson Sword was releasing commercials that depicted shaving your nether regions as cheeky fun — which fit in with the Brazilian's cultural identity as a simple, sassy way to get a little bit naughty.

Present day: minge is back

Which brings us to today, where publications and trend pieces seem to be falling over themselves to declare the start of the age of the retro bush. The New York Times cited the fuller bushes of Naomi Campbell and porn star Stoya as evidence of a trend, while the Today Show used recent comments by Cameron Diaz, Kathie Lee Gifford, Jenny McCarthy, and Gwyneth Paltrow supporting fuller pubic hair as proof that the Brazilian's days were numbered. And there were, of course, those American Apparel pubic hair mannequins — one of the company's New York City stores boasted mannequins with enormous, visible merkins over a few weeks last winter.

A 2013 UK poll found that 51 percent of women polled didn't trim or wax at all — and that of those women, 45 percent used to be into pubic styling, but had given up the (vulvic) ghost. Still, eports of the death of the Brazilian wax may still be exaggerated — a 2014 poll of Cosmopolitan readers found that 70 percent of them still go for a full Brazilian, and the Journal of Urology reports that more than 80 percent of female college students remove most of all of their pubes.

If we do all end up growing back the crotch shrubbery that God gave us, it won't be a revolution or a scandal — it'll simply be another swing of the pendulum in the wild, extremely wooly world of pubic hair trends.

More like this
11 Mid-Length Haircut Ideas To Inspire Your Next Salon Visit
By Carolyn Steber
The Best Beauty Looks Spotted At Paris Couture Week 2023
By Audrey Noble
15 Modernized '60s Makeup Looks & Hairstyles That Feel Wonderfully Retro
By Olivia Rose Rushing
Hailey Bieber's New Bob Is Short Haircut Goals
By Olivia Rose Rushing
Get Even More From Bustle — Sign Up For The Newsletter
From hair trends to relationship advice, our daily newsletter has everything you need to sound like a person who’s on TikTok, even if you aren’t.