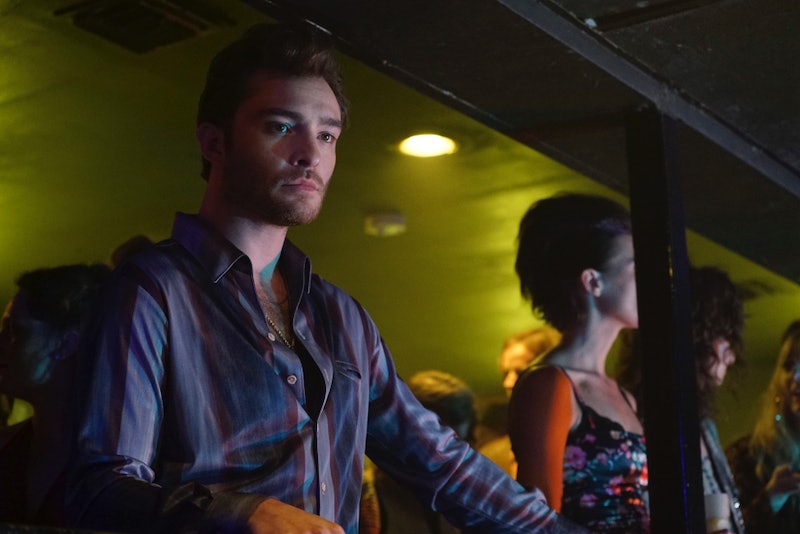 Murder… sex… Ed Westwick… If any of these three things appeal to you (and really, they all should), then I highly recommend tuning into the Wicked City series premiere this week, which will include all of these listed items in full. You see, there's a serial killer on the Sunset Strip who's targeting young women. But this guy doesn't just seduce his prey. He also leaves his own unique calling card by requesting a song dedication to his latest victim on the radio. And as soon as that music starts flowing, so does the blood. But while the act itself is downright gruesome (and does nothing to ease the plight of violence against women on the small screen), the music is undeniably addictive. So if Westwick's return to the small screen isn't enough to lure you into watching, then believe me when I say that the Wicked City soundtrack is to die for in and of itself.

Look, if I'm being honest, the dialogue needs some serious work and outside of the show's two main stars, the characters can sometimes feel like two-dimensional cliches that we've seen portrayed time and time again. Then there's Kent's necrophilia tendencies, which offers up a whole new bag of creepy. But if there's one thing this series got right (other than bringing Westwick back into our lives, that is), it's the music. Not only do these background melodies provide the perfect '80s vibe, they also hold significant clues to what's going on within the story as well. What exactly do I mean by that, you may ask? Check out the list of Wicked City songs below and see firsthand how they could serve as a type of killer foreshadowing.

1. "Dancing With Myself" — Billy Idol

Most of Kent's victims are women that he meets at a nightclub called The Whisky. But while he may start out the night with a dance partner, by the end of the evening he really is dancing with himself. But hey, that'll happen when you have a habit of killing your date.

I think it goes without saying that Kent's concept of love is pretty flawed right now. He kills the women he's attracted to and then proceeds to have sex with their corpses. If that isn't the most tainted (and nightmare-inducing) form of love, then I don't know what is.

In Kent's eyes, "there's no other way" for him to be living. Killing is as easy as breathing. And now that he's started, he can't stop.

This could very well represent Kent's very first kill. I doubt that's what Foreigner was thinking of when they wrote this song, but boy does it work for this scenario.

5. "Crimson And Clover" — Joan Jett And The Blackhearts

As we've seen from the promos, Betty will prove to be the exception to Kent's killing rule due to the fact that she has kids. And while he may hardly know her, he feels a connection to her and thinks he can love her.

Betty will become immediately infatuated with Kent, who will help her explore a side of herself that was mostly kept at bay. Let's just hope he doesn't end up breaking her heart. After all, there's no wrath like a woman scorned…

If you give a murdered a cookie, he's going to want more, more more.

It's a nice day to start (killing) again.