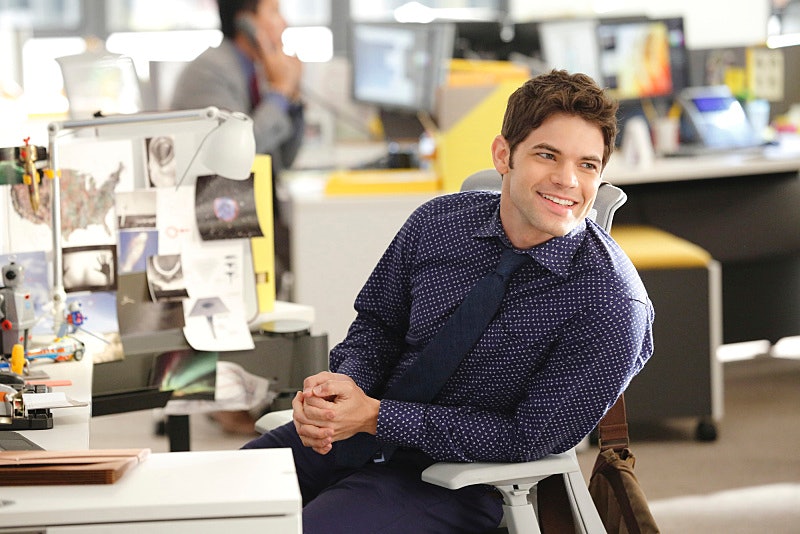 The destined heroes of the House of El aren't the only characters on Supergirl who come from the pages of DC Comics. Even the IT guy at Kara's corporate office hideaway has the potential for greatness. Who is Winn Schott on Supergirl ?

The character is played by Jeremy Jordan, who you may recognize from Smash, the Broadway production of Newsies, or the movie The Last Five Years with Anna Kendrick. According to the official CBS First Look for the series, he and Kara are coworkers at CatCo and he's got a moderate crush on her, to say the least — but Kara's awkward first meeting with Jimmy Olson might spell trouble for that relationship's development. That said, Kara trusts Winn enough to reveal her super secret to him, and he in turn helps "brand" her as a hero.

However, his name is familiar to DC Comics fans and that's not good news. Winslow Schott is also known as Toyman, a dangerous villain in that universe. He was sort of the Willy Wonka of toymaking, but his company was bought out by Lex Luthor, who used his inventions for the military instead of children. Schott initially became Toyman to seek revenge, but his true turning point came after he was arrested for trying to assassinate Luthor. Someone wanted to make a toy out of Schott, and he complied, but then became upset when the toy didn't sell — no children wanted to play with Toyman when they could have Superman instead. This turned him into a real maniac. Sad, and now we know that he has a jealousy problem. He also is connected to two characters who also appear in Supergirl, Cat Grant and Jimmy Olson. Both Olson, and Grant's son Adam, were kidnapped by Toyman.

Will we see Winn turn into Toyman on Supergirl? The DC villain is confirmed to appear, but his "relationship" with Schott is still a mystery. His invention skills have barely scratched the surface beyond programming. He does appear to have some interesting tchotchkes and pictures on his desk and a similar skill set, but I'm not convinced that a trope-busting story like this one won't have more nuance than that. The show seems to pride itself on going against expectations. However, perhaps I am just projecting my own feelings. It would be a shame if he became evil because not only is Jeremy Jordan charming as hell, but he can sang too.

If Winslow Schott does turn out to be a villain on Supergirl, you can come to me and we'll cry about it together. Still, I'm looking forward to seeing how the show presents this character's journey. They have complete artistic license to take Schott in whatever direction they choose, so fingers crossed that he doesn't break too many hearts along the way.