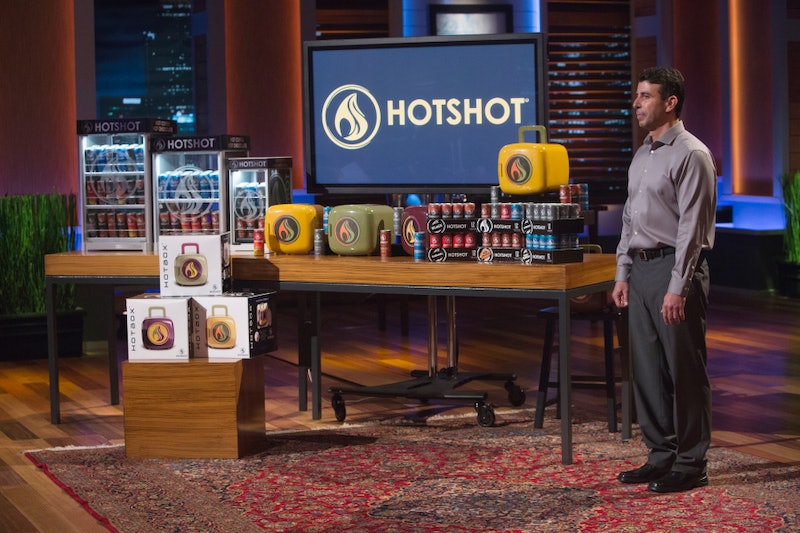 Plenty of people drink coffee on the go. Few Americans, however, probably sip their java the way HotShot's beverages are meant to be drunk. This is the latest Shark Tank product to subvert expectations, but if you march to the beat of your own drummer as well, you might just be looking to find out where to buy HotShot drinks by the time the end credits roll around during Friday night's episode of the show.

Unfortunately, I foresee a couple of problems for HotShot when it enters the Shark Tank. I predict that the Sharks will either think it will be too expensive to educate the public about this new product or believe it's trying to solve a problem that doesn't exist. Both of these issues are no bueno when it comes to making money.

But with the episode yet to air, it really is too early to say how the Sharks will sway when they learn about HotShot. If the product is tasty and the entrepreneur behind it adequately shows that it has potential, it's possible the Sharks will bite. At the end of the day, how could you go wrong with a coffee product, really?

Read up on what HotShot is all about and judge for yourself whether or not it will be able to successfully fuel your coffee addiction. You know it's got to be a winner if it does.

It's Hot Coffee In A Can

Coffee in a can really isn't anything new. Starbucks has been selling those Doubleshot Espresso drinks in cans for years now, and that's just about as commercial as coffee gets. However, what makes HotShot unique is that this coffee comes in an aluminum can and it's served piping hot. What a refreshing combination, indeed.

It's Not All About The Can

So what kind of sorcery is this, you ask? The can is certainly an important component in keeping the coffee inside warm without burning your hand with its insulated label. However, in order to put the "hot" in HotShot, you need what the company is calling a Hotbox, a.k.a. a "hot fridge," that looks like a more retro, grown-up version of an Easy-Bake Oven. The Hotbox can heat and store up to nine HotShot cans in total, but I also kind of think it would look super swanky as part of your apartment decor, too.

It's Big In Japan

If you think drinking hot coffee out of a can is just downright crazy, then you need to get out a little more because canned coffee has already been kind of a big deal in Japan for quite some time, and it's often sold in a vending machine-like device. Hollywood stars like Brad Pitt, Arnold Schwarzenegger, and Bruce Willis have even starred in commercials for Japanese canned coffee. After discovering how the Japanese drink their coffee during a trip to Japan in 2009, HotShot's founder Danny Grossfeld decided to bring it over to the U.S. We'll have to wait and see if Americans take such a strong liking to the trend, too.

The Founder Is A Business Vet

The Sharks may have a lot to say about Grossfeld during Friday night's episode of Shark Tank, but one thing they can't say is that he doesn't know anything about business. Grossfeld has been an entrepreneur since he was a kid, manning a retail table outside of his parents' store at age 8, leading a group of peers selling candy at age 12, and then selling at flea markets and street fairs by the time he was in high school, according to his LinkedIn page. As an adult, Grossfeld would go on to work for the family business in liquidation and wholesale distribution, launch two retail stores, a wholesale business, and a restaurant, and then formed a joint venture with a Japanese pollution tech company, all before founding HotShot. No wonder Grossfeld was looking for a quicker way to get coffee in his belly.

It Got Its Start On Kickstarter

Like many products that enter the Tank — and even those that don't — HotShot got some initial buzz for its Kickstarter campaign launched in March 2015. Unfortunately for the company, it only made $8,605 of its $100,000 goal. The Sharks are certainly not going to like to hear that because it could show that people just aren't interested in the product, but then again, if HotShot had been successfully funded on Kickstarter, it probably wouldn't need to appear on Shark Tank in the first place.

HotShot Might Be Coming To A Store Near You Soon

If HotShot sounds like something you need to get your hands on stat, you're going to need to get your coffee fix elsewhere for the time being. HotShot is currently not available in stores, but its Kickstarter page lists a delivery date of December 2015 if it was successfully funded, and the company's website also lists winter 2015 as the official launch date for the product, which I also think means December 2015. HotShot's social media profiles have been pretty quiet since the Kickstarter campaign ended in May, so the company is either getting ready for something big, or its appearance on Shark Tank will be its last hurrah.

More like this
The 9 Best Easy-To-Use Coffee Makers
By Vanessa Spilios
Howard Stern's Net Worth: Is He The Richest Man In Radio?
By Hugh McIntyre
Bachelor Nation's Blake Horstmann Is Dating 'Love Is Blind' Star Giannina Gibelli
By Jake Viswanath and Radhika Menon
Everything We Could Expect In Gabby & Rachel’s Season Of The Bachelorette
By Kadin Burnett
Get Even More From Bustle — Sign Up For The Newsletter