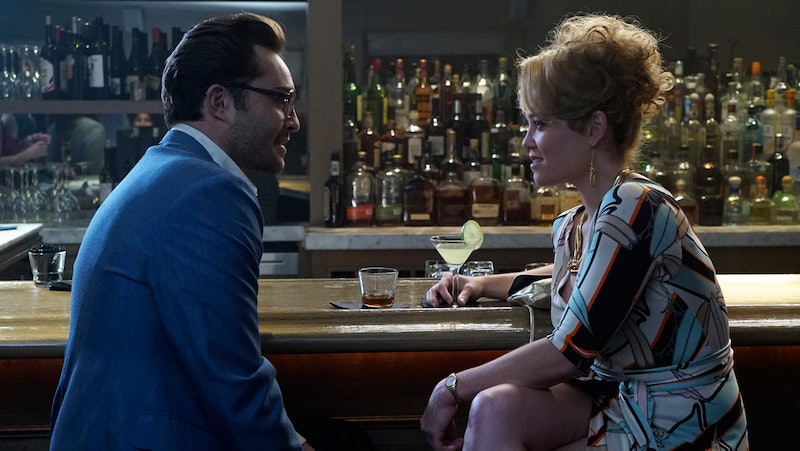 If you've seen the promotional ads for ABC's new anthology series Wicked City , you've probably noticed two things. First of all, Ed Westwick will never not be dashing and charming — even when he's playing a serial killer. Secondly, the music and hairstyles are a dead giveaway that the show is set sometime in the 1980s. But, exactly when does Wicked City take place? As the show's trailer clarifies, the year is 1982 and the setting is Los Angeles — specifically, the Sunset Strip. And, based on real life events of the 1980s, both the year and the location are deliberate.

Wicked City focuses on a serial killer (the aforementioned Westwick) and the woman who becomes both his lover and his partner in crime (Erika Christensen). Meanwhile, Jeremy Sisto and Gabriel Luna play the homicide detectives who are tasked with tracking down the deadly couple — so it looks like the show will use a formula similar to The Fall, where viewers know the killer's identity all along and wait for the cops to catch up with us. And, it'll be interesting to see how detectives operate without the technology and smartphones we currently take for granted.

But, what else does the 1982 setting mean for the show as a whole?

It Will Strive To Be Historically Accurate

Although creators have said that Wicked City is not based on a true story, there are undeniable parallels between the show's plot and two real-life serial killers who terrorized the Sunset Strip. Douglas Clark and Carol Bundy were lovers who killed multiple people, both male and female, in 1980 before being apprehended by police.

According to the Los Angeles Times, the showrunners' goal is for Wicked City to be historically accurate — not campy. "We want you to live in series, not feel like you're watching a museum piece," executive producer Amy B. Harris told the newspaper.

The Music Will Be Awesome And Important To The Plot

If you love '80s music (and who doesn't, really?), you'll think the soundtrack is to die for. (Pun intended — sorry, I had to.) When Wicked City premieres, the first thing we'll hear is Billy Idol's "Dancing With Myself." And, Westwick's character has a peculiar and super creepy modus operandi — he prowls nightclubs in search of potential victims, phones in a song dedication to the local radio station, and then kills them as the music plays. So, we'll probably walk away from each episode thinking about some of our favorite songs in a whole new way.

We Can Count On Great Costumes

What's the fun of a period TV show if the costumes and hairstyles aren't on point? Judging by the trailers and promotional pictures, I think we can count on plenty of fun wardrobe selections to accompany the mystery. My only concern is that the premiere will leave me wanting to make last-minute changes to my Halloween costume.

So, crank up your '80s playlist, put a nice pouf in your hair, and get ready for the premiere of our newest anthology obsession.