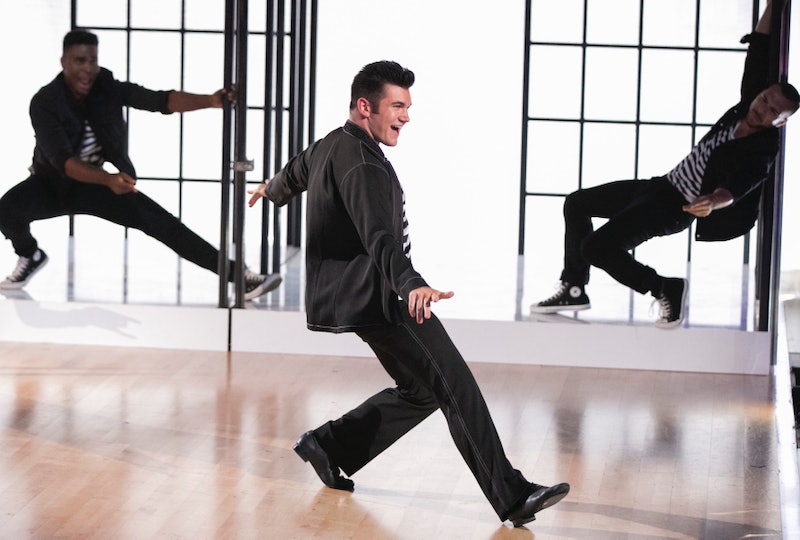 Alek Skarlatos and Lindsay Arnold are a dream team on Dancing With The Stars , but suffice it to say that Alek was less than pleased with the scores that he and Lindsay received on Iconic Dances week. Alek and Lindsay did a little “Jailhouse Rock” by Elvis Presley, and the judges did not think that the dance was as good as Alek did. In his pre-dance interviews, Alek was kind of acting like a little baby when Lindsay was trying to teach him the dance, flipping off the “fake” judges, and being petty. Like, dude, don’t get mad—get better. That’s basically what Lindsay said to him, and, thankfully, Alek took that advice to heart.

What Lindsay did first was get Dancing With The Stars dancing pro Artem in her and Alek’s rehearsal to show him the ropes. Artem really helped Alek center himself and get his head in the game to come out and rock their waltz to Beyoncé’s “Haunted”. Alek needed to get serious and push aside any anger he had about last week’s scores (which were obviously at least partly his fault), and it all worked. Alek and Lindsay’s scores for Halloween week were higher than for the Iconic Dances week. Bruno said that Alek was “dynamic”, “present”, and “giving [him] a character”, and Julianne and Carrie Ann both agreed. I bet that Alek also agreed with such good scores.

This is the point in the competition on which people can’t be complacent, and I’m glad that Artem came in to metaphorically smack Alek upside the head and make him realize what he needs to do. Lindsay couldn’t get through to him, so I’m happy that Artem finally could! If Alek wants to win Dancing With The Stars, he has to get better and better until the end of the show, so he can’t be so in his head about scoring and all of that nonsense. He just has to dance and let the judges and the voters do the rest.

More like this
13 Photos Of Formula 1 Racers Charles Leclerc & Carlos Sainz That Will Drive You Crazy
By Radhika Menon
Harper Teasing David Beckham’s Dad Dancing Is Beyond Adorable
By Frances Stewart
An 'Eastenders' Star Has Completed The 'Strictly' 2022 Line-Up
By El Hunt and Sam Ramsden
Lewis Hamilton Turned Down A Role In 'Top Gun: Maverick' For This Surprising Reason
By Darshita Goyal
Get Even More From Bustle — Sign Up For The Newsletter