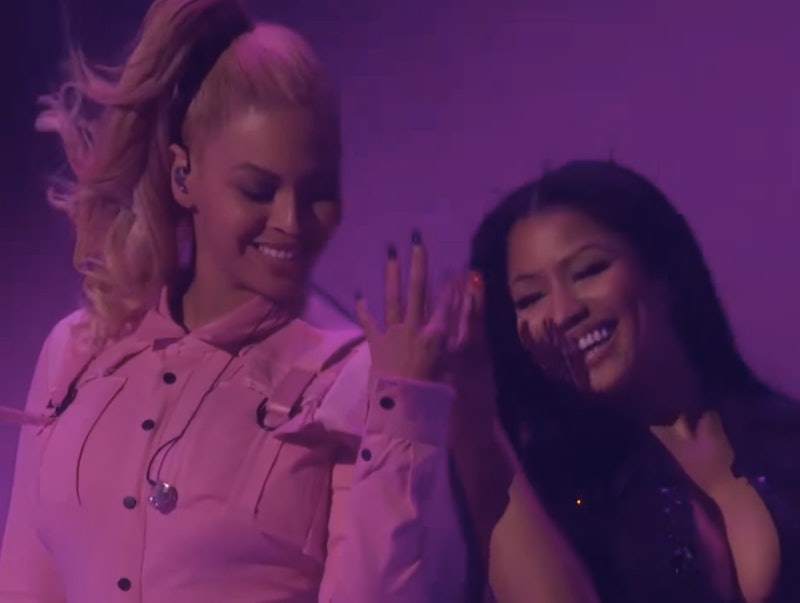 Another day, another reason to be supremely jealous that you can't count Beyoncé and Nicki Minaj as among your best friends. We all remember where we were when Beyoncé and Minaj performed "Feeling Myself" live for the first time, a performance that TIDAL subscribers can enjoy any time they want. However, that's not the only thing you can see on TIDAL. Amazing behind-the-scenes footage from before the TIDAL X 10/20 concert is available, and the clips that have been released so far will give you such a serious case of FOMO that you might actually pay to sign up for TIDAL just so you can keep feeling it.

Beyoncé released one clip on her official YouTube channel, of her and Minaj fooling around backstage while Beyoncé sings a song that, by the title of the YouTube video, is called "Darling Nicki," which pretty much details that Beyoncé can't say no when Minaj asks her to do anything. The second video is much longer, and even more awesome. In that moment during their performance where Beyoncé shouts "world stop," and she and Minaj turn to face each other to give each other "ice grill," they were actually having a playful competition. As you can see in the video, Beyoncé challenged Minaj to be the last one to crack that ice grill — even though she admits that she was always probably going to be the one to burst out into laughter first.

Even though the glimpse into the personal lives of these two performers is amazing enough, that's not the greatest thing about these clips. No, the greatest thing about these clips is that it just reinforces that Minaj and Beyoncé are such good friends. The way they laugh and joke around with one another, the way they show easy affection by pulling each other in for hugs, the way they are both consummate professionals who know how to work off one another's energy to put on a good show — all of it combines to paint a picture of the real definition of #SquadGoals. (Sorry, Taylor Swift. Sorry, Amy Schumer and Jennifer Lawrence.)

Compared to other celebrities, Minaj and Beyoncé have a really understated friendship that only really shines through when the two of them are collaborating on a song together. And, sure, maybe I'm blowing it out of proportion. Maybe they get along when they're working together, but don't really hang out much outside of that. Maybe they're not as close as their casual interactions would make it seem. However, even if this is all just a wonderful dream I'm having, I can't help but think it's still amazing to see two such musical moguls getting along so effortlessly in a world where no one needs even the slightest provocation to imagine feuds where there usually aren't any.

But don't take my feels as your only word for it. Check out the videos and try not to wish you were best friends with Beyoncé and Minaj.