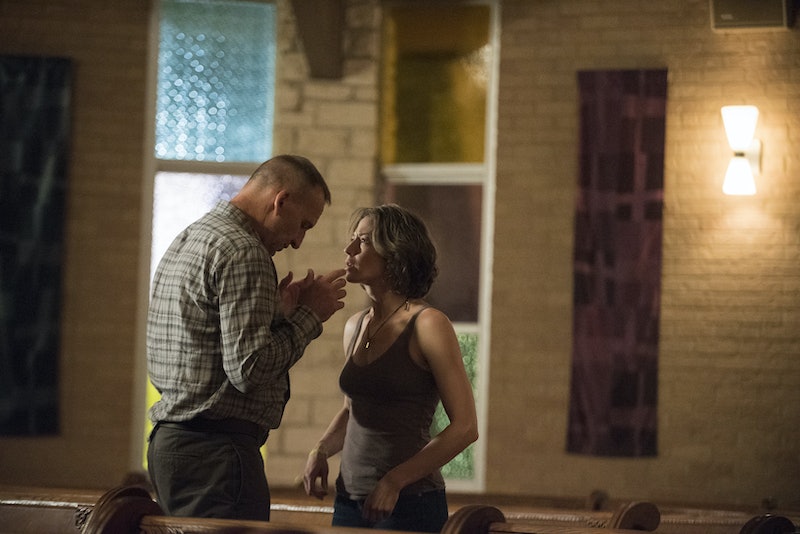 According to the Bible, a righteous man named Job was the unwitting target of a cruel bet between God and Satan. Satan argued that Job only worshipped God because he was rich and blessed. God argued that Job would still worship Him even if all of that was taken away; so he gave Satan permission to torture Job. Satan proceeded to kill all of Job's livestocks, servants, and children, and cursed him with painful sores. Guess who won the bet? Even before the Book of Job was explicitly referenced in "No Room At The Inn," the fifth episode of The Leftovers ' second season, the parallels were abundantly clear. Poor Reverend Matt Jamison is a modern-day Job, and his story this week was not a pretty one.

Ever since his comatose wife, Mary, woke up on their first night in Jarden, the reverend has been replicating their routine of that day in an attempt to reawaken her. It's a selfless devotion that he only wavers from when he decides to take her to a nearby hospital for scans, to see if there has been any brain activity. But the trouble starts as soon as the Jamisons leave the miraculous embrace of Miracle National Park.

First, Matt learns that Mary is pregnant — a blessing unto itself, certainly, but also a curse, in that everyone now assumes that he assaulted his comatose spouse. Then, on their way back to Jarden, Matt and Mary are attacked by a father desperate to get himself and his son into the town. He beats Matt with a wrench and then brutally breaks his wrist to get his ID bracelet; he also sabotages the reverend's car for good measure. Matt is forced to hobble back to Jarden on foot, pushing his wife's wheelchair with a broken wrist the whole way.

Once they arrive, they aren't permitted in since their wristbands have been stolen. They are almost rescued by John Murphy, but the firefighter changes his mind when he feels antagonized by the Matt's unwavering spirituality. So Matt locates a man who can smuggle people inside, but he won't do it for less than $1,000 dollars. He finds a woman who will lend him the money, but she inexplicably makes him beat a man in order to receive it. He finally makes it into the tunnel that will take him to Jarden, but he and Mary are swept out by turbulent waters. They are finally smuggled inside by Nora in the trunk of her car, but they soon come across a car accident: the man who had stolen his wristband earlier is now lying dead on the side of the road, his son orphaned and afraid.

Ultimately, Matt makes a surprising decision. Once he makes sure Mary is safe in the care of Nora and Kevin, he departs Miracle of his own volition. He returns to the encampment on the outskirts of town, where there is a stockade that declares "Repent." He volunteers to be locked within it, naked. It's unclear exactly what Matt feels like he's repenting for. Doubting the miraculous powers of Miracle and taking Mary outside of it for scientific tests? Beating a stranger for what turned out to be a futile reason? Being a part of the chain of events that led to another man's death? The answer is likely a combination of all of the above.

It will be interesting to see how and when Matt reenters the world of The Leftovers. According to the rules established in this episode, one can only leave the stockade when another volunteers to take your place. This is unlikely to happen anytime soon; and even when it does, Matt won't be able to get back into Jarden without another brazen smuggling attempt. It feels as though the writers have sidelined the character for the time being — although with the brilliant way this season has been shaping up, it's safe to assume that they have a plan. We'll just have to wait patiently and wait for a sign... just like Matt Jamison in his self-imposed exile.