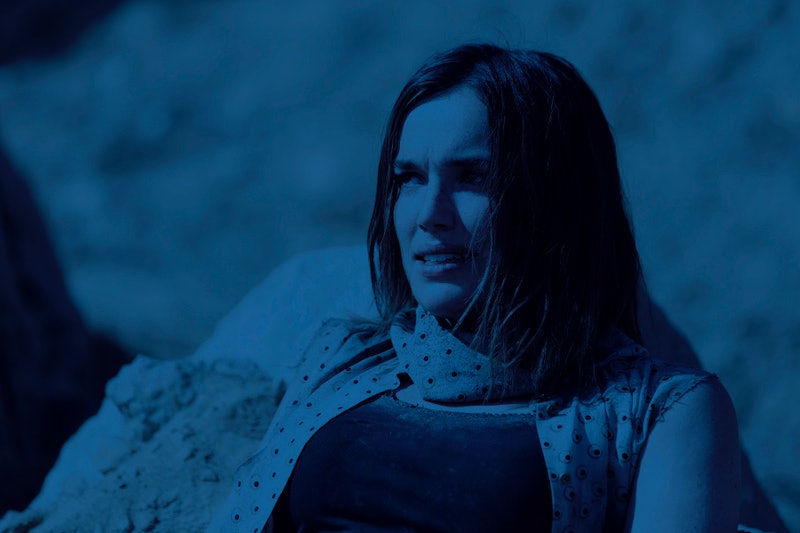 Something is definitely amiss with Jemma Simmons on Agents of S.H.I.E.L.D.,which makes complete sense. She did just get rescued from a harrowing six months essentially shipwrecked on a hostile alien planet, after all. PTSD (no matter how much she might deny it to therapist-in-residence, Dr. Andrew Garner) is one factor of her current state, sure, but we now know there's something else involved. Simmons wants to return to the alien planet where she was trapped, and no one is quite sure why.

Luckily, fans got a few clues from last week's episode, "Devils You Know." We saw Simmons acting strangely protective over her calculations and scribblings on the alien planet — she even went so far as to snap at Bobbi and Fitz when she found them looking at it. She also made some unsettlingly ambiguous comments throughout the episode — take, for instance, the fact that she told Dr. Garner that she had given up all hope and faith while stranded. She also implied that she was completely alone, and saw fit to remind him, "I am not one of your Inhuman patients."

All those statements make sense — a powerless Simmons marooned all on her lonesome in a less-than-comfortable environment? Of course she'd eventually give up hope for survival. But still, there was something in her evasiveness that makes me wonder what she's not telling us.

There's also the episode's ending for us to ruminate on. Simmons capped things off revealing, "Something happened to me, Fitz, on the other side. It's time I tell you the truth. About everything." Holy cliffhanger, Batman! What is that supposed to mean? Simmons may have vehemently denied being an Inhuman, but might she have gained powers by some other means? And the "other side" comment taken together with the moment of total loss of faith she described earlier to Dr. Garner certainly seems to imply that she... well, died. She's still here standing before us, and she's (presumably) not a ghost, so she's obviously not dead-dead — but could there have been a resurrection of some kind?

According to TV Guide, there's also an evil, cloaked figure in play — perhaps Simmons wants to return with Fitz in tow and vanquish her tormentor using science? And, how exactly, did Simmons manage to escape said tormentor? Did she just get really good at evading it, or did it decide to spare her for some unknown reason? She implied that she was stranded on her own, but perhaps she was able to find an ally... Thanks to new promo clips, we know that she was eventually able to find (and kill, and eat, and belch) food, but still. Six months is a long time to be all alone.

Whatever Simmons' reason for wanting to return, it must be a big one, because if one thing is clear, it's that her time on the planet was not enjoyable. I'm inclined to think that Simmons, like us, wants answers. After all, throughout the show's three seasons, is there anything she has pursued with more enthusiasm than the truth? She says her time on the planet was all about survival and less about her customary scientific method, but there must be some puzzle over there that she has to solve... and perhaps, therein lies her determination to return.

Luckily for us, S.H.I.E.L.D. is finally, finally about to explain the method to her madness."4,722 Hours" will focus almost entirely on the six months Simmons spent marooned on the alien planet. And be prepared: Promo clips from the episode feature Simmons wishing an iPhone picture of Fitz "Good night," so you can bet it's going to be a heartbreaker.