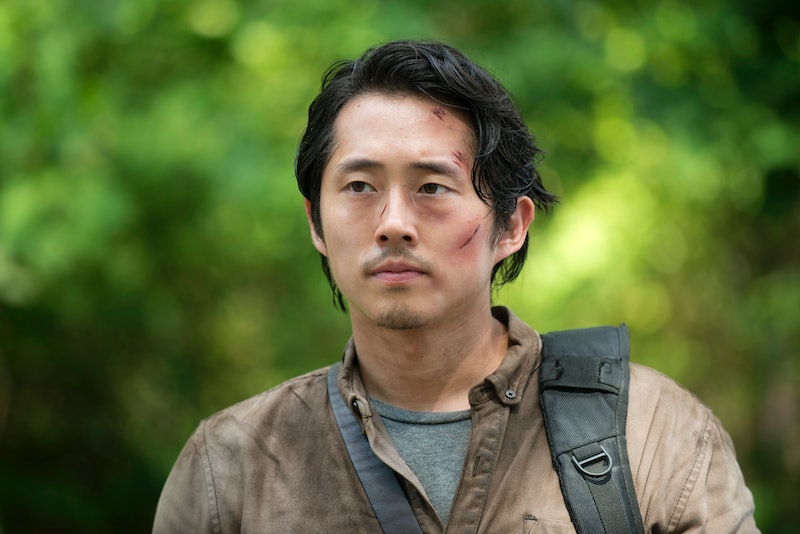 Raise your hand if you’re still distraught over the third episode of The Walking Dead Season 6, "Thank You." I know I certainly haven't recovered. However, it’s a new week and time to pull ourselves together for another episode — a fresh start, if you will. And there may even be reason to look forward to the next episode. It might seem impossible to some fans, but I'm convinced that Glenn is not dead on The Walking Dead. His violent scene was suspicious in many ways, but first, if you missed it, let me refresh your memory of how he supposedly died.

After being overrun by a giant, terrifying herd of walkers, Glenn, Nicholas, Michonne, Heath, and some other Alexandrians tried to get home to protect the Safe-Zone when they were trapped in a local store by walkers. Glenn and Nicolas offered to go set a building on fire to distract the walkers so everyone could get out. Walkers start to surround the two from every direction (is it just me or are these walkers moving much quicker than they used to?) and they jump on top of a dumpster, where a traumatized Nicholas looked at Glenn, thanked him, and then shot himself in the head. He then falls on top of Glenn, causing them both to plummet directly into the middle of the walkers. You can watch the full (gory) scene below.

Here's why I think Glenn survived that attack.

1. This Clue From A Producer

I’m gonna say that it seems pretty clear that somebody died in that sequence. Listen, you know, our show’s tough, dude. People die in very unsuspecting ways, so you kinda gotta let your eyes tell you what you saw.

The first clue is somebody. That somebody could mean just Nicholas, since we know for certain that he is dead. The second clue here is when he says to let our eyes tell us what we saw. We didn’t see Glenn take his last breath, or close his eyes, or technically die.

When people die on The Walking Dead, they almost always go on the after show to talk about what happened. It’s extremely suspicious that Yeun did not appear on Talking Dead, and wasn't even featured in the pre-taped set interviews the episode showed.

Spoilers for The Walking Dead comics below

Maybe you’ve heard a character named Negan mentioned before by fans. He’s a terrifying and massive villain in the comics The Walking Dead is based on, and leads a group called the Saviors. Negan ambushes Glenn's group in the middle of the night, lines them up, and decides he’s going to murder one of them as revenge for killing one of the Saviors. He picks Glenn and murders him with several blows to the head with a baseball bat wrapped in barbed wire.

Now, I don’t want this to happen to Glenn either, but it’s a more heroic death than being overridden by a hoard of walkers because of Nicholas. I just think if Glenn has to die, it should be in a strong, heroic way — one that doesn't involve Nicholas at all.

4. Glenn Is Essential To The Show

Glenn has been around since day one, and he’s a fan favorite. The only thing worse than killing him off would be Daryl Dixon dying, and at that point I think viewers would revolt. Plus, if skilled fighters keep dying, everyone on The Walking Dead will be in trouble, since the Alexandrians are pretty much useless.

5. Nicholas Landed On Top Of Him

That fall was positioned very suspiciously. The way Nicholas fell on Glenn looked an awful lot like he landed directly on top of him, meaning that those intestines you saw being ripped out might belong to Nicholas, not Glenn.

Not to keep bringing up bloody guts, but shouldn't Glenn already be dead when that much of his body is being ripped out? Glenn is still screaming while this is all happening, and the camera moves away before we see his eyes close.

7. It Would Destroy TWD Fans

If you were on Twitter on Sunday, then you already know the heartbreak this caused. If Glenn did die, it will destroy fans, so they need to keep him safe for all of us. This show has already put us through enough.

How cruel can you be to Maggie, Walking Dead? First, almost her entire family was murdered on her farm. Then her father's head was chopped off right in front of her by The Governor. When she's finally about to see her sister again after being separated shortly after Hershel's death, Beth is murdered literally minutes before they were going to reunite. The Walking Dead can't take the only person left in Maggie's life away from her, or us.