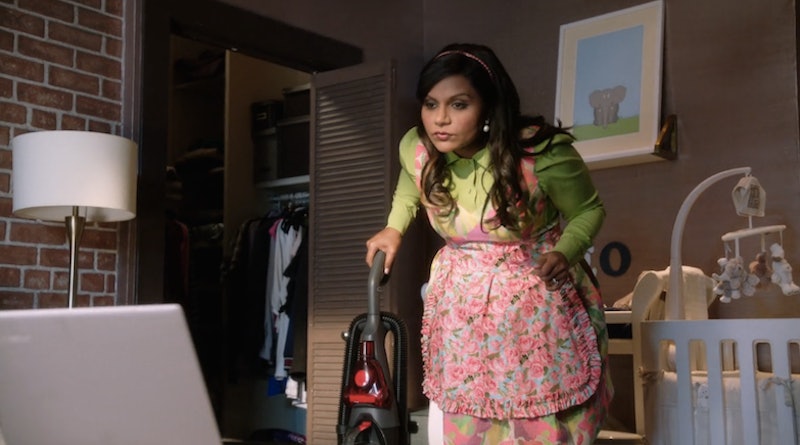 When last season of The Mindy Project tackled what happens when your partner "slips" during sex, it was a great opportunity for a conversation to begin about communication in the bedroom. Now in its the fourth season, The Mindy Project is tackling issues that are a little different than "I Slipped," but equally as important: issues and topics that new mothers face each day. While the show remains true to its roots in comedy, the idea that it can incorporate and tackle topics that new mothers face is pretty special. On "Mindy and Nanny," yet another topic of childcare was brought into play, when Mindy's new nanny turned out to be an anti-vaccine activist. And while it isn't the most crucial storyline in the episode — Mindy and Danny's mom bond over caring for Leo — it is just another way The Mindy Project is doing a service for young women.

A lot of it has to do with the power that is Mindy Kaling. For some — me — every word Kaling breathes is valued. That's a lot of pressure for one person, but what The Mindy Project does correctly is that it sends a message effortlessly. Nothing feels labored in new episodes of The Mindy Project. Whether that be because of its new home at Hulu, or just the new storyline the show has created now that Mindy and Danny are new parents, everything feels as organic as little Leo Castellano's pureed foods.

Here are some of the best topics The Mindy Project has tackled on Season 4.

Its no secret that Mindy Lahiri and Danny had some major issues with the midwives' technique from the moment Brendan and Duncan moved into the building. But, because of a bit of poor planning and a little something called irony, Mindy almost had to give birth on the subway by one of the midwives. She made it to the hospital, but it wasn't the "baby retrieval suite" she had hoped for. Either way, Mindy and Danny had different views on their baby's birth, which was awesome to see because that's a very real conversation for parents today.

When Mindy was breastfeeding her son on the subway, some jerk — aka, the new doctor at the practice, Jody — shamed her for breastfeeding in public. This is something that some new mothers are shamed for, and it was nice to see Mindy Lahiri tackle such a prevalent issue.

One of the biggest struggles Mindy faced after giving birth was the need to go back to work. Danny preferred that she quit her job and stay at home with Leo. Of course there is nothing wrong with either option, but the conversation is an important one parents have after welcoming a baby into their family, and it was important that The Mindy Project showed the reality of that situation.

In the most recent episode "Mindy and Nanny," Mindy finds the perfect nanny — or so she thinks. When she learns that the nanny is posting photos of Leo in "anti-vaccination" onsies, and is a very serious anti-vaccination activist, Mindy decides to let her go. While it wasn't a focal point in the episode, it was still another way the show was able to touch on the ongoing debate between vaccination present in our country.

The Mindy Project Season 4 has only just begun, so there's no telling just what else the cast of characters can cover. Whatever it is, it's sure to be awesome.