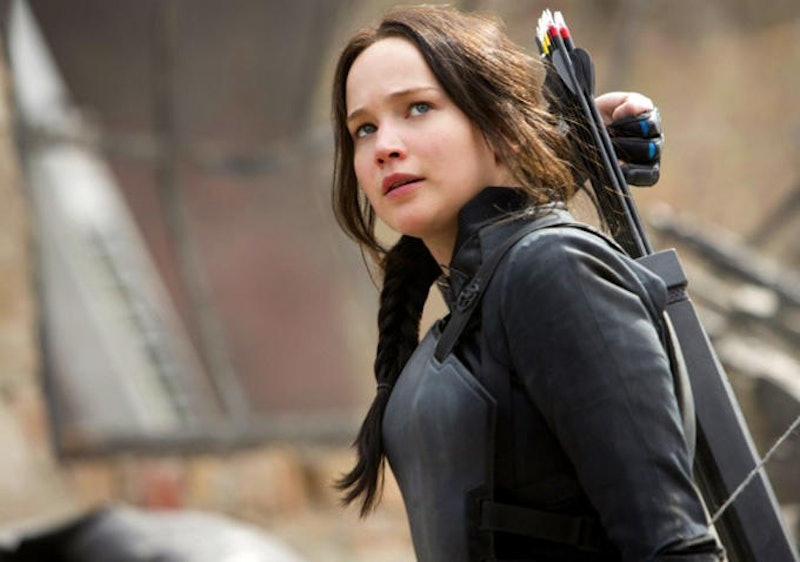 The Hunger Games: Mockingjay, Part 2 is coming to theaters November 20, picking up from where Mockingjay, Part 1 left off. Since the movie dives right into the narrative without recapping the events of the previous movies, you're going to want to brush up on everything HG-related before buying your ticket for opening night. "Sure," you say. "No problem!" You open Netflix and start to type in "Mockingjay, Part 1," only to be met with the dreaded "Explore Titles Related To" page (a.k.a., the part where you find out that the movie you want isn't available for streaming). OK, fine, but when will Mockingjay, Part 1 be on Netflix?

Here's the deal: technically, Mockingjay, Part 1 is available through Netflix. But only through the DVD option. Does anybody even still have that kind of account? At this point in my life I get impatient when I have to wait 20 seconds for a movie to download, so I really can't imagine waiting a day or more for a DVD to arrive via snail mail. So, the better question is when will Mockingjay, Part 1 be streaming on Netflix?

There's no confirmed date; however, the film is available for free online streaming from Amazon Prime, and for purchase from digital retailers like iTunes. Also, in the past each of the HG movies has become available once the subsequent one is released, so it's possible that Part I could be streaming on Netflix once Part 2 hits theaters. I know, I know; so unfair.

What is this, Panem?!

If Netflix is your only source for streaming, though, there are still some opportunities to get your fill of Jennifer Lawrence, YA dystopian novel adaptations, and all of the other ingredients that make up the HG series. Here are some options on Netflix now to help satiate your Hunger Games needs — whatever they may be — until Mockingjay, Part I is online.

If You Can't Get Enough of J-Law

Watch Silver Linings Playbook, the movie for which Lawrence won the Academy Award for Best Actress.

If You Love Dystopian Movies

Check out Snowpiercer, in which the inhabitants of a post-apocalyptic world live on a space train which is segregated by class. Bonus: Tilda Swinton plays a character who's kind of like an evil version of Effie Trinket (and with equally questionable taste in fashion).

If You're Fascinated By The Original Story

Stream Battle Royale, a Japanese movie based on a book which is so similar in plot to The Hunger Games that Suzanne Collins has been accused by some of stealing the former's premise, although Collins has denied ever hearing of Battle Royale until after writing her own series.

If Parodies Are Your Thing

You can watch The Starving Games, which satirizes The Hunger Games in the vein of Scary Movie. But just a heads up: nearly everybody on RottenTomatoes hated this movie, so don't blame me if you find yourself wanting the two hours of your life back that you spent watching it.

If You Fangirl Over Josh Hutcherson

Catch the adorable actor (along with many other A-listers) in The Kids Are All Right, which was his biggest role until he was cast as Peeta.

If you're still craving Mockingjay, Part I after all of these fun flicks, then maybe it is worth it to upgrade your Netflix account to the the DVD plan (or at least shell over the couple bucks to buy it on iTunes). We all know you're going to spend way more than that to see Mockingjay, Part 2 multiple times in theaters anyway...