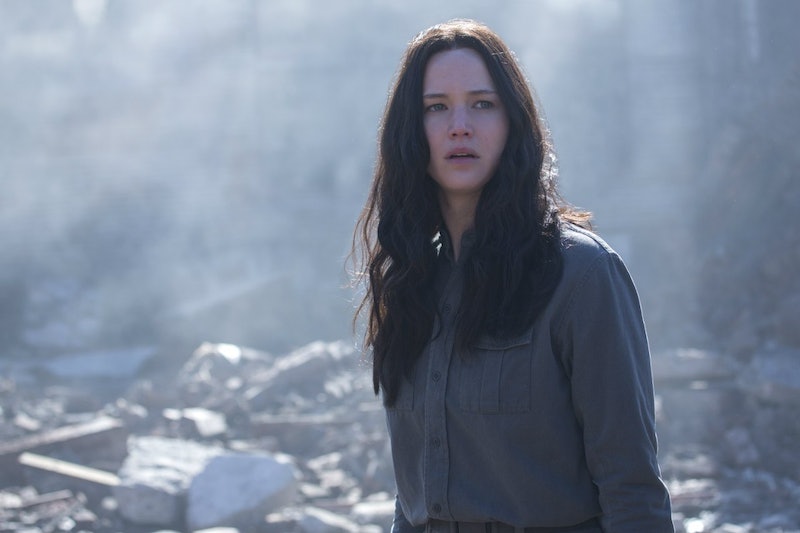 There's always going to be a Team Gale vs. Team Peeta debate when it comes to The Hunger Games. But Mockingjay Part 1 proved that Katniss loves Peeta, so she, at least, has made her choice. I've never been Team Gale, but I have watched and read about Katniss struggling to choose between the pair. I know she will continue to do so in Part 2. But while her brain may not know the answer, her heart has known that she loves Peeta for a long time — Mockingjay just further confirms this.

Even Finnick picked up on her love. It's not even like he was around her a lot. He spends much of Mockingjay in the hospital recovering. But he still notices how Katniss is acting about Peeta. In the film he gently informs Katniss of her feelings.

After your first Games, I thought the whole romance was an act on your part. We all expected you'd continue that strategy. But it wasn't until Peeta hit the force field and nearly died that I knew I'd misjudged you. That you do love him. I'm not saying in what way. Maybe you don't know yourself. But anyone paying attention could see how much you care about him.

It's true, anyone paying attention to Mockingjay Part 1 can see that Katniss' heart has chosen Team Peeta for the following reasons. [Movie spoilers ahead.]

SHE DREAMED OF PEETA TO COMFORT HER

When having trouble sleeping, her subconscious had her dream of Peeta walking in and staying with her. Yes, she was around Gale in person all day, but at night when things were at their worst she just wanted Peeta so badly that she dreamed him up.

AS SOON AS GALE SAID PEETA WAS BACK, SHE LEFT HIM

Sure, she ran to hug Gale after he returned from the rescue mission. But after he told her where Peeta was she left his side in an instant. I think it's clear who she wanted to make it home safely.

SHE HAD MULTIPLE BREAKDOWNS OVER PEETA

So much so that she literally had to stop being the Mockingjay because she couldn't take being responsible for Peeta's continued demise.

SHE DEFENDED HIM TO GALE

She was 100 percent on Peeta's side when Gale was mad that he was spouting Capitol lies. "You don't have any idea what he's going through!" Katniss snaps. "That is the same Peeta that defended you at the whipping post."

Both Gale and Prim were almost locked out of the bomb shelter, but Katniss was really only concerned with Prim. When the Capitol attacked the hospital and bombs were falling all around them she didn't seem worried that maybe Gale would die. Even when she knew he'd gone to save Peeta she wasn't that upset that Gale could be captured too. It wasn't until both Peeta and Gale looked to be gone for good that she got upset.

When Gale is mad at himself for not saving more people from the flames in District 12, it's Cressida that speaks up. "Without you there would be no District 12, not even the memory of it," she tells him. How odd that a stranger reassured him when Katniss was right there.

SHE'S CONSTANTLY PLAYING WITH THE PEARL

The pearl Peeta gave her in Catching Fire is her talisman throughout Mockingjay. Whenever she's alone it's in her hands, as she obsessively reminds herself of Peeta.

SHE WOULD HAVE SACRIFICED HERSELF

The ultimate display of her affection is that Katniss was ready to give herself up to President Snow in exchange for Peeta's release. If that's not love, I don't know what is.