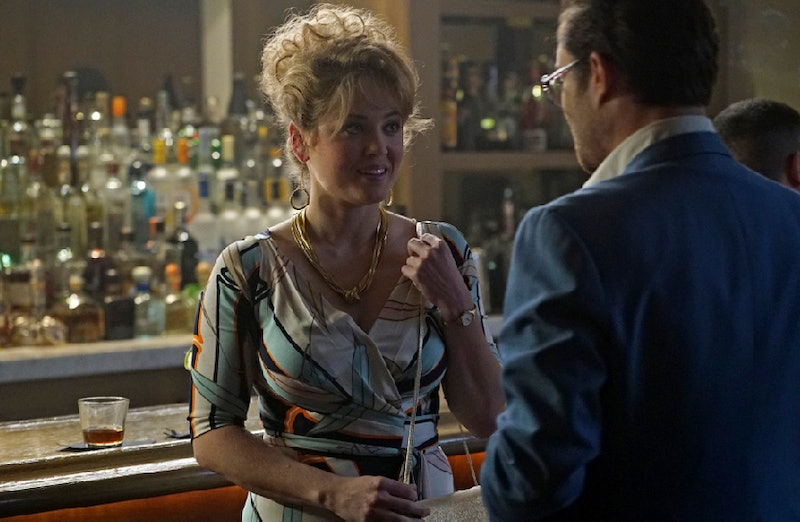 The '80s weren't all pastel headbands and Paula Abdul singles. Leave that version of the decade to The Goldbergs. Instead, Wicked City is set in the dark, decadent '80s, when Los Angeles' Sunset Strip was a beacon of release, debauchery, and quick money to be made. In the ABC drama, the Strip beckons a kaleidoscope of different individuals to the party, including one particular single mom and nurse. Erika Christensen's Wicked City character Betty Beaumontaine is a far cry from the last working mother she played, Parenthood's Julia Braverman. Betty meets a match who taps into her dark side when she crosses paths with Ed Westwick's character, Kent Grainger. The two embark on a murderous spree, fueled by their infatuation and shared depravity. But is Betty Beaumontaine based on a real person?

ABC told Bustle that Wicked City is not based on a true story, meaning Betty is a work of fiction. Still, Christensen's character is a familiar archetype: a dissatisfied woman from an unassuming background who liberates herself by breaking taboos. (And in this case, several laws too. She probably should have just enrolled in a class or something.) Betty reminds me of these female characters, who also broke out of their shells in some pretty extreme ways. They kicked repression to the curb, with varying degrees of success.

On the original Heroes series, loving mother Niki Sanders accommodates her dark side by literally splitting her personality. Jessica is her bad girl id, a hyper-violent siren who goes places that Niki would never dare (or want) to go. Unfortunately, both versions of Ali Larter's character were killed off, so fans won't be seeing either good or bad Sanders on Heroes Reborn.

Gotham tells the story a little differently, but Tim Burton's Batman Returns version of the character fits this bill completely. Being good gets Selina nowhere; in fact, it gets her killed by her scummy boss. She's resurrected by some street cats (which is why you should always be nice to them) and takes on the identity of Catwoman. It's amazing what a vinyl catsuit can do for one's self-image, not to mention some sexy wordplay with Bruce Wayne.

Freedom isn't free, as they say, and Betty Beaumontaine may see some consequences on Wicked City. But in the meantime, she's ready to see just how far her dark side will take her.