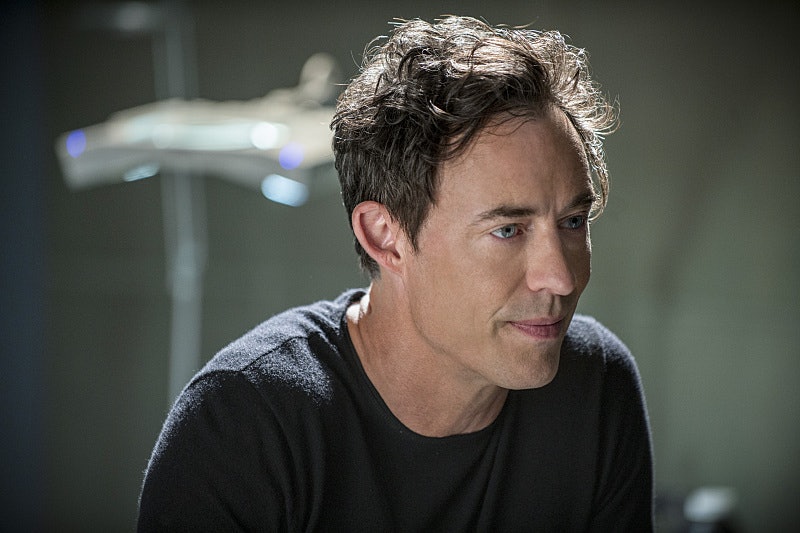 The Flash may be a few episodes in to Season 2, but it finally feels real now that we get to really dig in to Harrison Wells theories again. The smarmiest scientist made an epic return as Earth-2's Harrison Wells traveled to Earth-1 on The Flash. What is he doing there? Is the entirety of Earth-1 a secret lair for him? I would not be surprised. However, my biggest question about the differences between this guy and the one we loved to hate last season is whether or not Harrison Wells is a metahuman?

While, according to Zap2It, this Wells won't be a speedster like Thawne, I think it's possible that he could have some kind of powers, especially since he still founded S.T.A.R. Labs in this other world. This is also definitely an alternative version of the original scientist Wells, not Eobard Thawne. As Grant Gustin pointed out in an interview with Access Hollywood, Barry Allen admired Harrison Wells before he even met (who he thought was) him, so his relationship with the other Harrison Wells is sure to be complicated. In the same interview, Tom Cavanagh teased the personality differences between Earth-2's Wells and Thawne-Wells, which sounds like a lot of fun.

"This seemed to me to be a massive opportunity to turn the tables. [With] Eobard as Harrison last year, there was a certain intelligence and charm and mannered way to him – a thoughtfulness. And I think the expectation was, this same person coming from Earth 2 would be like that and my thought was, 'Why?' And if he's much more brusque and arrogant and generates conflict then I think all the better for the show and all the better for me to play that."

I'm getting the impression that this Harrison Wells will be a jerk, and I can't wait to see it. Still, he moved through that portal in S.T.A.R. Labs with such grace that I'm pretty convinced he has some metahuman in him. He is definitely connected to their world, or else why would he want to Barry's world in the first place? What is his connection to Zoom? He wouldn't be Harrison Wells without a secret, or twenty.

I like the idea of Barry Allen having to face his broken relationship with Harrison Wells in multiple ways following his death, first with his father skipping town and second with this new edition Harrison Wells 2.0 just portal-ing into S.T.A.R. Labs (and further proving that their security system is merely a suggestion). This will be especially interesting if and when Barry has to work with them. It's basically the same as when Alastor "Mad Eye Moody" returns in Harry Potter and the Order of the Phoenix and Harry is just like... "sure you were really Barty Crouch Jr. for a whole year, but I'll accept that you're a cool and trustworthy guy IRL; let's go fight some Death Eaters."

On Earth-2, Harrison Wells "Secunde" is in the right line of work and the right epic battle, so I'm placing my best on him being a metahuman. Which brings me to another question — how were metahumans "created" in Earth-2? Did the particle accelerator explode and release dark matter in that universe too? What kind of science-based powers will Wells have? Will Gideon recognize him in Earth-1? The gate to the alternative question has opened up so many questions on The Flash that it's going to get even more complicated before we have answers, but having Harrison Wells back makes it all worth it.