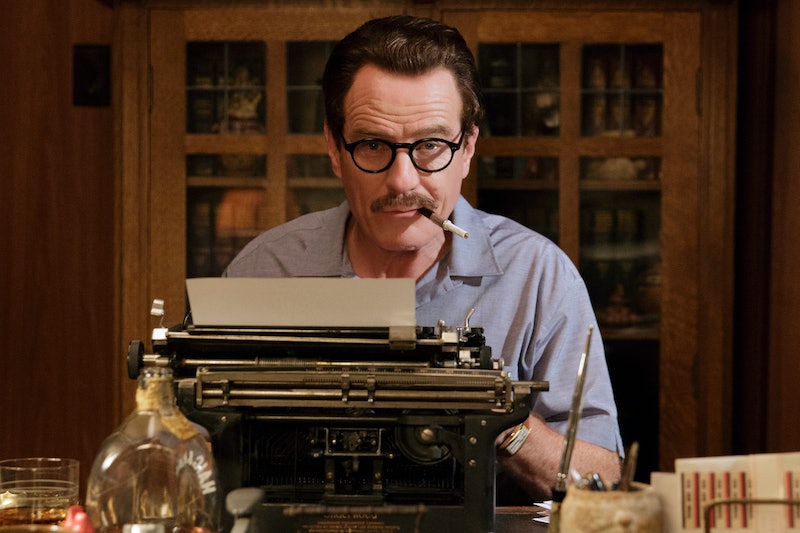 Dalton Trumbo isn't a name that the average moviegoer would recognize. In fact, he wasn't that well known even when he was a successful Hollywood screenwriter — mainly because the screenplays he wrote were under pseudonyms. However, he was widely known as one of the most famous alleged communists during the '40s and '50s. He was part of the "Hollywood 10," a group of artists who were barred from working during that time because of their alleged involvement in the communist party — but that didn't stop them from doing it anyway. Trumbo and members of the "10" found ways to write movies and get away with it, through some pretty creative methods. A new film by Jay Roach attempts to tell this story, but exactly how accurate is Trumbo in retelling history? From the portrayal of Hollywood's communist witch hunt to how Trumbo's career affected his family life, the film succeeds in keeping the truth upfront — and that's largely thanks to Trumbo's real-life daughters, Nikola and Melissa.

The two sisters, known as Niki and Mitzi, are the last living members of Trumbo's immediate family and were heavily involved in the creation of the movie's script, based on Bruce Cook's book, Dalton Trumbo. Roach urged screenwriter John McNamara to reach out to the women, telling The Hollywood Reporter, "I encouraged him to get to know the people directly involved." With the help of Trumbo's daughters, the filmmakers were able to ensure that they made a well-balanced story that stayed close to the truth. The addition of the familial relationships had another effect, too: humanizing the legendary Hollywood icon.

With Bryan Cranston in the title role, a solid story, and a stellar supporting cast, Trumbo is getting tons of early Oscar buzz. Its basis in reality adds to the fuel, as everyone appreciates a well-made movie that seamlessly incorporates facts into the narrative and sticks close to the truth. Here's how Trumbo succeeds in telling the real story (spoilers ahead!)

Yes, Trumbo was a communist. He even openly tells his daughter about it in the movie, but he believes that shouldn't determine whether he should work or not. In the actual footage above, you can see his 1947 testimony in front of the House Committee on Un-American Activities where he was held in contempt of Congress for not admitting to being a communist. In the film's press notes, Niki said that being a communist in the '40s was totally different than what it means now. It "meant that you were pro-labor and anti-Jim Crow, and you fought for civil rights for African Americans," she said. "It had nothing to do with Russia and everything to do with how an already great country could improve itself." Trumbo ended up going to prison for 11 months because of his beliefs. Cranston's re-enactment of the testimony is uncanny and one of the most memorable scenes in the film.

Making A Smaller Version Of "The Hollywood 10"

The Hollywood 10 was a real thing, and the film's portrayal of the 10 stays true to the facts — for the most part. This is a Hollywood movie, and adding nine more characters into a film makes it a little crowded. That's why Trumbo decided to create the character of Arlen Hird, played by Louis C.K. He's a composite of five real-life communist screenwriters who knew Trumbo between 1947-1970: Samuel Ornitz, Alvah Bessie, Albert Maltz, Lester Cole, and John Howard Lawson.

The fact that Trumbo wrote two Academy Award-winning movies is 100 percent true. Because he was blacklisted, he gave his screenplay, Roman Holiday, to his friend and fellow screenwriter, Ian McClellan Hunter, so that he could take credit for it. It ended up winning the Academy Award in 1953. Trumbo also won an Oscar for his screenplay for The Brave One, under the name Robert Rich. The Academy eventually awarded him with an award in 1975 for The Brave One and then posthumously for Roman Holiday in 1993 for Roman Holiday.

Helen Mirren does a spot-on portrayal of Hedda Hopper, who was essentially the Us Weekly, Perez Hilton and E! of the time. She was a powerful voice in Hollywood that wore flamboyant hats and was determined to bring down Trumbo and anyone like him. She's probably the main villain of the film, and in Trumbo's real life.

Frank King (John Goodman) and his brother Herman (Stephen Root) were big-time B-movie producers in the '40s. They didn't care that Trumbo was a communist. They were all about high quantity, low quality films. They just wanted money from the films that they made, so they hired Trumbo to write movies under pseudonyms — which ended up paying the bills for Trumbo while he was blacklisted.

Trumbo's wife, Cleo (Diane Lane) is probably the only person who could ever stand up to the headstrong Hollywood icon. She believed in Trumbo and all that he did, but was strong and independent herself. When she was younger, she was a carhop (that's how Trumbo met her in real life) who had a talent for juggling water glasses — a skill that is shown in the movie.

Showing A Gift From Kirk Douglas

Trumbo worked with Kirk Douglas when he wrote the script for Spartacus. It was the first movie after being blacklisted where he didn't use a pseudonym. The two became friends and Douglas gifted him a parrot which was often seen perched on Trumbo's shoulder — just like in the movie.

The film shows Trumbo writing in the bathtub. In fact, the movie opens with him splish-splashing, smoking and typing away in his watery desk. This is all true, according to Douglas, who wrote about Trumbo's love for the bath in his autobiography. Trumbo spent hours working in the tub — but that wasn't his only writing habit. Trumbo was a workaholic, working 20 hours a day, smoking like a chimney, drinking booze, and popping stimulants to keep on going. Needless to say, it began to take a toll on his family — and you see all of this in the film.

Communist or not, Trumbo is probably one of the most talented screenwriters ever — and it's great to finally have a movie about him that puts reality first.